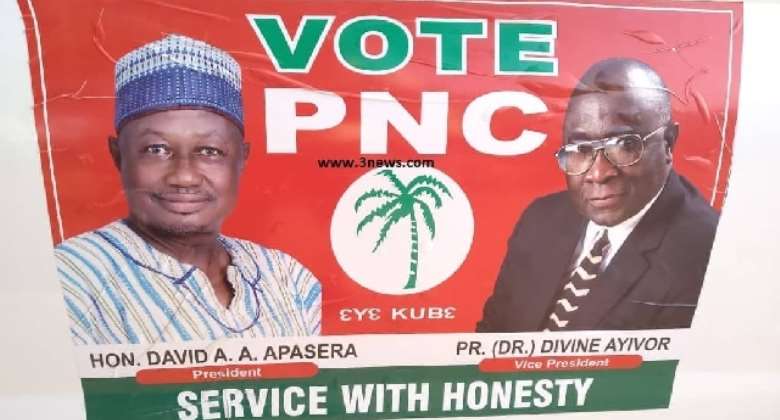 According to Mrs Nabla, the two politicians dip their hands into the party’s coffers nilly-willy without recourse to her despite being the “CEO” of the party, as well as a signatory to the account.

Apart from the GHS1.7 million, she claimed Mr Apasera recently took an undisclosed amount of money from sympathisers of the PNC meant for the party’s National Executive Committee meeting without informing or rendering account for it.

Also, she claimed the two politicians have been using party funds to reimburse themselves for allegedly pre-financing party activities with their private funds.

Mrs Nabla wondered if Mr Apasera and Mr Dani Baah are sidelining her on gender grounds.

“Is it because I’m a woman?” she wondered in an interview with ClassFMonline.com.

She made the counter-allegations after the two politicians accused her of taking some GHS30,000 belonging to the PNC from the Electoral Commission and using it on their blindside.

Mrs Nabla, however, explained that she used the GHS30,000 to pay rent for the PNC’s 16 regional officers.

Out of that money, she said Mr Apasera took almost a half of it to pay the rent of the party’s national headquarters in Accra.

The other 15 regions, she added, got just about GHS1,000 apiece to cater for their rent.

“I didn’t pay the GHS30,000 into the national account because anytime money goes into that account, the two dip their hands into it and use it anyhow”, she explained.

Reacting to the allegations, however, Mr Apasera, who denied all the claims, explained to ClassFMonline.com that in the lead-up to the 2020 polls, the party first raised GHS500,000 out of which each of the PNC’s 39 parliamentary candidates got GHS10,000 to file their nomination. The flag bearer also used GHS100,000 to file his nomination, bringing the total amount to GHS490,000.

“She was there” when the money was being used for those purposes, Mr Apasera said.

He further noted that the party raised another GHS500,000 and used it to bankroll other campaign activities such as the drafting and launching a manifesto; printing posters and T-shirts; resourcing the parliamentary candidates to move around, campaigning in the northern parts of the country, renting two SUVs and a pickup and paying the hotel bills of the campaign team.

The expenditure, according to Mr Apasera, wad done “in the full glare of everyone”, adding: “There has never been any time that myself and Moses have decided on expenditure without telling them”.

He continued that the party “finally raised GHS700,000 at the last moment and everybody had a budget” including the General Secretary and “she was given what she came for and then we made sure every parliamentary candidate was given GHS5,000, every region was given GHS3,000 for monitoring and then I was to go out to campaign”.

“Moses Dani Baah was to go back to Tumu and help the candidate”, he added.

“Ask her. She has been in the party and she was calling the shots in the past”, Mr Apasera dared.

“She’s making all these funny allegations. Where is that money that I dipped my hands into?” he asked.

He said “even at the last NEC meeting, I set up a committee to investigate all the allegations and I told them at that meeting that if they investigate and I have spent a dime of the party’s money, I will resign. I am a politician of character”, he noted.

“And, so, when somebody comes out knowing nothing except backbiting and trying to destroy and trying to control and makes stupid allegations. So, at the last congress, we set up a committee of three and I told them they should investigate and come out and tell me who has chopped party money and if what she’s saying is a lie, the party will sanction her because you can’t wake up from within the party and try to create unnecessary stories just because you don’t like someone”, he noted.

In a recent statement issued by the party, it described the misappropriation claim as “completely false” and “misleading”.

The statement signed by National Communication Secretary Awudu Ishaq said the party has taken note of the “unfortunate” news reportage carried by both mainstream and social media, accusing the leadership of the party of misappropriating party funds realised during the last elections campaign in 2020.

The party said it wishes to state that the allegations from the General Secretary directed at the leader and National Chairman are “completely false, misleading and intended to equalise leadership's demand for accountability from her regarding some financial malfeasance on her part”.

“It is worth noting that the party, at its last National Executive Committee meeting held on Saturday, 27 February 2021 in Accra, caused the National Treasurer of the party to render an account of how funds realised for the purposes of funding the party were applied, especially, during the electioneering.

“National Executive Committee members, including the General Secretary, had the opportunity to interrogate the accounts rendered by the National Treasurer, which was deemed largely satisfactory by the NEC”, the statement said.

It noted that “it is, therefore, surprising and shocking that the same General Secretary, who wrote the minutes for that meeting, will run to the media seeking to impugn the image and integrity of Hon David Apasera, who, since his assumption of the leadership of the party, has run an open and transparent leadership never witnessed in the history of the PNC”.

The party said by this statement, it “seeks to set the records straight” and to assure its rank and file that “appropriate steps will be taken to resolve this needless media war between the leader and the General Secretary in the supreme interest of the party”.

“Let everyone rest assured that the party will make public the breakdown of the revenue and expenditure of the party if need be, in order to put the party on a sound footing bereft of wrangling and accusations”, the statement noted.

In a counter-statement backing Ms Nabla, however, the regional executives of the PNC made reference to the party’s press release of 11th April 2021 and appealed to the general public to “treat the said release with all the contempt its deserves, as it represents the personal opinion of the writer and not that of the party”.

It continued: “We acknowledge the feud between our leader, Hon David Apasera and our General Secretary, Madam Janet Nabla, which emanated from a certain GHS30 000.00 being an amount received from the Electoral Commission of Ghana and which led to a discussion of another GHS1.7 million being funds raised” in the lead-up to the 2020 general elections.

“We are fully aware of every penny spent as far as the GHS30 000.00 is concerned because we suggested to the General Secretary to give us the money to support our regional office rent advances. Same cannot be said by us when it comes to the GHS1.7 million raised for the 2020 election campaign by Hon David Apasera. This is because we are yet to see any comprehensive account on that amount to us”, the regional executives said.

The statement said, “an attempt was made to account for the GHS1.7 million at the NEC meeting of 27 February 2021 but was clouded with so many clerical and basic arithmetic errors and was never ‘deemed largely satisfactory’ as claimed by Comrade Awudu in his statement”.

“We appeal to our leader, secretary and all interested parties to resort to the structures of the party to resolve their differences instead of bringing them to the media”, the regional executives urged, adding: “These media arguments, consequently, deteriorate the fortunes of the party”.

“We humbly wait for the leader to present proper accounts to the National Executives Committee to deliberate on”.