NPP Is Oceans Bigger Than Any Individual Member or Operative 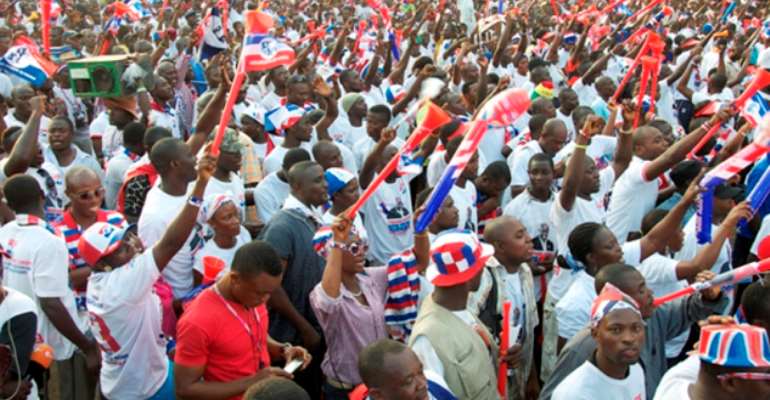 I can bet my proverbial “Bottom-Dollar” that there is absolutely no factionally identifiable group within or among the entire panoply of the membership of the ruling New Patriotic Party (NPP) by the name or designation of Concerned Northern Grassroots of the NPP. This is a veritable cardboard façade of political decoys set up by the Mahama Propaganda Machine and Faction of the opposition National Democratic Congress (NDC) to divert attention from the all-too-obvious cynosure of the unbeatable Presidential Candidacy or flagbearership of Vice-President Mahamudu Bawumia and the New Patriotic Party in the leadup to the 2024 General Election (See “Non-Akan Comment: Kyei Mensah-Bonsu Is One of Alan’s Biggest Enemies – NDC Communicator” Peace FM / Ghanaweb.com 4/10/21).

We must also hasten to point out that we live in a constitutional democracy, where each and every individual citizen or bona fide member, leader or operative of any legitimately constituted major political party establishment has an inalienable right to free speech, including, of course, Mr. Osei Kyei Mensah-Bonsu, the New Patriotic Party’s Member of Parliament for Kumasi-Suame and Leader of the NPP’s Parliamentary Majority Caucus, as well as the substantive Minister for Parliamentary Affairs. The vacuous and gratuitous calls for the neck of Mr. Mensah-Bonsu, because the Asante-Suame-Breman native has dared to speak truth to the practical realities of the times, is nothing short of criminally outrageous. Common sense and strategic intelligence ought to make it crystal clear that but for the Kufuor-Mpiani-orchestrated “Spare-Tire-ism” or crude politics of tribalism that characterized the New Patriotic Party from 2000 to 2016, there is absolutely no way that a downright politically unenlightened ministerial second-bananas like John “I Never Missed Any Chance for Payola” Dramani Mahama could have succeeded to the Presidency.

I have often asserted, and hereby repeat the same, that had a lame-duck President John Agyekum-Kufuor done the morally upright thing by at least perfunctorily but publicly endorsing the Presidential Candidacy of the then-Vice-President Aliu Mahama, the man who had been both his running-mate and substantive right-hand man or Vice-President for two consecutive electoral terms, the strategy-famished desperadoes of the National Democratic Congress would not be presently attempting to impudently sabotage the very bright chances of the much more progressive and better performing New Patriotic Party breaking the so-called 8-year cycle of alternating bipartisan leadership of the country. I have also categorically observed that venturing forth into the 2024 General Election, the NPP’s most foolproof chances of retaining the Presidency, and thus continuing with the party’s phenomenal development achievements and agenda, will be to have Vice-President Bawumia occupy the very top of the party’s Presidential-Nomination Ticket, very possibly with Mr. Alan John Kwadwo Kyerematen as Dr. Bawumia’s running-mate or Vice-Presidential Candidate.

Among the Akan, there is a maxim that runs as follows: “One does not blow for another person to bite.” Most Ghanaians are more familiar with that variation on the latter that runs as follows: “Monkey works, Baboon chops.” Put even more felicitously: “Monkey should not work for Baboon to consume ravenously like a pig.” In sum, the history of the late 2007 New Patriotic Party’s National Delegates’ Congress on the sprawling campus of the University of Ghana, Legon, leading up to the 2008 and 2012 Presidential Elections, is wide open for the instruction or edification of any bona fide Ghanaian citizen who cares about the collective well-being and healthy development of the country to readily access, read, digest and ponder.

We need to also seriously bear in mind what the legendary and immortalized Mr. B J da Rocha, that is, Mr. Bernard Jao Da Rocha, the first National Chairman of the New Patriotic Party and prime broker of the internecine impasse that beset the party, a deliberately orchestrated attempt to effectively quench the presidential ambitions of “The Little Man from Kyebi,” with only four months to the 2008 General Election, had to say about the true intentions and the relationship between Mr. Kyerematen, the arch Akufo-Addo antagonist, the prominent star cast of party stalwarts staunchly lined up behind Mr. Kyerematen, who deftly choreographed and orchestrated the skin-of-teeth defeats of the now-President Addo Dankwa Akufo-Addo, whom a former Aliu Mahama aide-de-camp and a latter-day John Dramani Mahama-minted mercenary diplomat recently had the temerity to contemptuously call “The Little Man from Kyebi,” and the New Patriotic Party at the time.

It was the imperative need to retrace our steps down memory lane and dispassionately lay down the unvarnished truth about the real heroes and villains and, of course, “hero-villains” framing the portrait of the phenomenal success story of the Akufo-Addo-led New Patriotic Party, that inspired yours truly to propose that party activists and prime movers not waste any time, in the wake of the seismic reelection of Nana Addo Dankwa Akufo-Addo to a second presidential term, to immediately launch a robust debate vis-à-vis who best qualified to both succeed Nana Akufo-Addo as well as shepherd the Danquah-Busia-Dombo-inspired Elephant Party into the next phase of the Second Industrial Age of Ghana, and not inexpediently wait until Nana Akufo-Addo’s mid-presidential term, as rather strategically “offsidedly” proposed by Mr. Kennedy Ohene Agyapong, before allowing the chips to fall where they aptly needed to fall in the leadup to the 2024 General Election. You see, I was also well aware of the fact that many of the offside team players among the anti-Akufo-Addo Faction of the New Patriotic Party had been waiting for just such prime opportunity, that is, strategic temporal brevity, to repeat their 2008 gimmickry.

In any event, what fascinates me more than all else in this most opportune flagbearership debate is the fact that it is actually National Democratic Congress’ apparatchiks like Mr. Victor Kwashie Adonu, the NDC’s Greater-Accra Regional Secretary, who appear to have taken center-stage vis-à-vis who among the leaders of the New Patriotic Party is best qualified to captain the most dynamic and progressive political establishment in postcolonial Ghana into the 2024 General Election. Well, “It goes to show you,” as one of my Bronx, New York, neighbors is fond of saying.