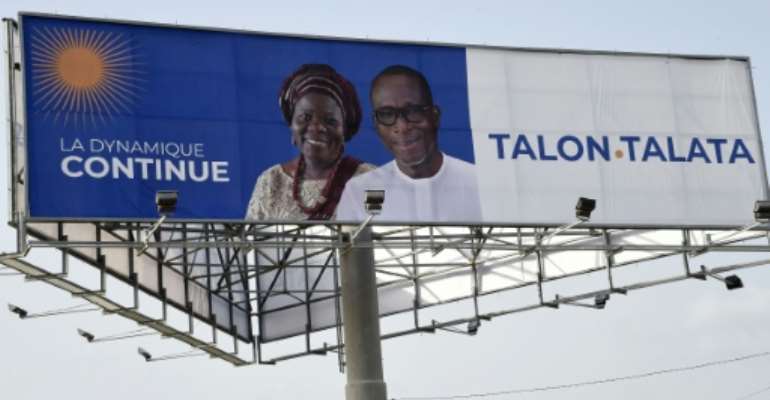 Voting material was yet to arrive in parts of northern Benin midday Saturday, the west African country's electoral commission said, after residents blocked major roads in protest a day ahead of presidential elections.

President Patrice Talon faces off against two little-known rivals on Sunday, Alassane Soumanou and Corentin Kohoue, as most opposition leaders are in exile, have been disqualified by electoral reforms or targeted for investigation by a special court.

"Blockades were set up on major roads in the north, so electoral material is still on its way," the president of Benin's autonomous electoral commission (CENA) Emmanuel Tiando told AFP.

"It is possible that some polling stations may not open at 07:00 (06:00 GMT) tomorrow, considering the electoral material will arrive late," he said, adding however that "there is nothing preventing this election from taking place."

Since Tuesday, residents in several opposition strongholds in central and northern Benin have blocked hundreds of cars and trucks travelling between the coast and the north, towards Niger.

A dozen election coordinators told AFP that as of Saturday midday, electoral material was yet to arrive in the north.

Protesters accuse Talon of having rigged the election in advance by sidelining the opposition.

Map of Benin. By (AFP/File)

On Thursday, clashes erupted between protesters and security forces. In the central city of Save, two people died and five others suffered gunshot wounds after troops fired tear gas and live rounds in the air to break up a demonstration.

The mayor of Save, Oba Chabi, told AFP the city was calm on Saturday and that electoral material had arrived there.

A truck belonging to the electoral commission was ransacked Thursday by protesters in the nearby town of Tiou, said Tiando.

Further north, in Tchaourou, the road was still blocked midday Saturday, forcing the electoral commission's trucks to find alternative routes to get to the north and leading to delays.

Talon did not address any of those incidents or violence during his final event, as the campaign came to an end at midnight Friday.

"This election campaign was just as we anticipated: a celebration!" Talon said Friday on Twitter.

Earlier in the day, he had held a rally in Godomey, where he said he expected a "KO" -- a knockout victory for which there would be no need for a runoff vote.

Results are expected to be announced on Monday or Tuesday.

Any reasonable government will prioritize the abandoned proj...
13 minutes ago