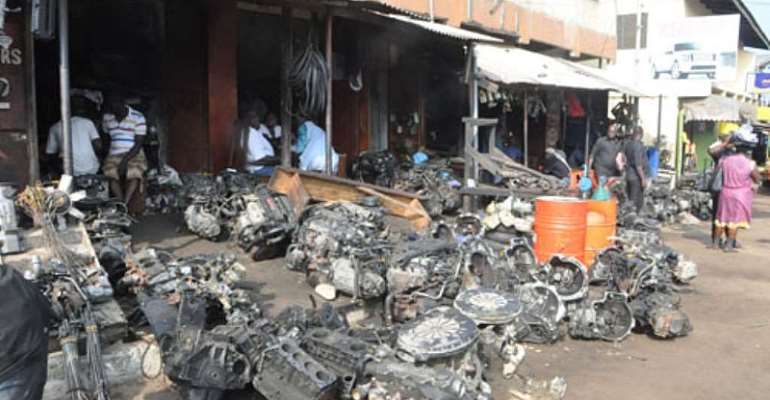 The Greater Accra Regional Minister, Henry Quartey has proposed the construction of a spare parts village to address the congestion at Kokompe and Abossey Okai spare parts in Accra.

According to the Minister, the government would be readily available to assist the traders to make the dream a reality.

The proposal was from a deliberation the Minister had with and the leaders of the Kokompe and Abossey Okai spare parts dealers associations.

According to Mr Quartey, both leaders of Abossey Okai and Kokompe “have openly told us that they have two major challenges relating to the decongestion of the Abossey streets. And they told us that they are ready to collaborate with us in ensuring that people who have not been authorized to do business on those streets are moved.”

A leader from the Kokompe market in support of the project said: “What they are doing there is indiscipline, and we will not condone that indiscipline so whenever they [government] are ready to embark on that decongestion, we have pledged our assistance to them so that they can move all those guys from the road for free flow of traffic.”

“When you come to our market especially Kokompe and Abossey Okai, how the place is parked with vehicles on the sides of the road, we said we should clear it so that the road will be free for people to pass. We are going to speak to our members so from next week at least we are going to give them till the end of this week so that next week we can clear the area,” another leader of the Abossey Okai market throwing his support for the proposal said.

The Greater Accra Regional Minister, Henry Quartey in his next line of action has “directed the two Municipal Assemblies thus Ablekuma North and Ablekuma Central to engage both Chairmen of the Abossey Okai and Kokompe spare parts dealers associations to visit the [proposed] land to see whether indeed the land has not been encroached. They should try and get all the necessary documents indicating that that land was procured by them.”

“Once that has been done, we will assist them to engage the services of lawyers to come out with proposals where financial interests will fade in to support them and then get them architectural designs to build what I will want to call a ‘Spare Parts Village’ in Ghana”, he said.