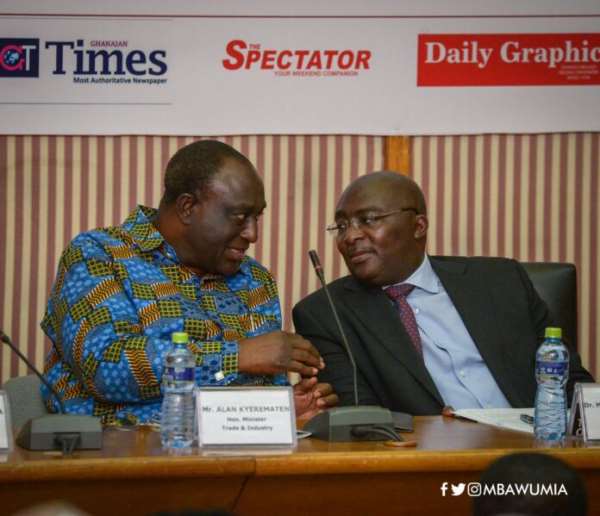 “The impression being created that the contest for now is between this man and that man is also not correct,” Dr Jonah observed on The Keypoints on TV3/3FM on Saturday, April 10.

“There are people who are also biding their time, waiting for the right time to come on board.”

There have been posters of the Minister of Trade and Industry and the Vice President making rounds in certain parts of the country as well as on social media as regards their interest to contest in the party’s presidential primaries in 2022.

The leadership of the party has since condemned persons behind this and called for a cessation of such acts.

At the start of the nationwide ‘Thank You’ tour last month of the national executives, General Secretary John Boadu made their position clear on the issue, persuading those with aspirations to rather contribute to the success of Nana Akufo-Addo’s second term.

“It is the good works of President Nana Addo [Dankwa Akufo-Addo] that will be the bedrock for any flagbearer to campaign on in 2024,” he told a gathering of supporters in the Greater Accra Region on Friday, March 19.

“So, we must allow [the president] to work, so that if Ghanaians are impressed with the work, which I believe will be so, NPP is going to be a party of the country.”

But Dr Jonah believes the party’s leadership must go beyond rhetoric since the situation is generating heat.

He argued that inasmuch as t is too early for any member of the party to express interest in succeeding the president when he has barely formed his government, it cannot be ignored by stakeholders such as the media.

“I don’t think the executives saying it is not time [will solve] it. This is not it. The fact that the time has not come for people to register does not mean we cannot talk about it. The people have already started talking about it, and so the leadership of the party should sit down maybe even with the two people to find out what it is they can do that this whole thing does not distract the attention of the president.”