The Truth: It is good that China Is Investing in Africa’s Energy and Transportation Infrastructure 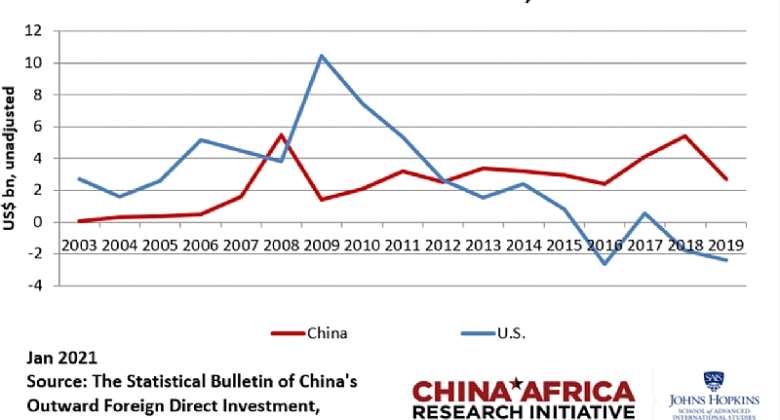 Below are two articles examining China’s investment policy in Africa that should be read to learn the truth about China’s lending to the continent. One, is a briefing paper from China Africa Research Initiative (CARI) entitled, Twenty Years of Data on China’s Africa Lending. The second is entitled, “Why Substantial Chinese FDI is Flowing into Africa, by Shirly Yu. Combined, both papers provide a thorough analysis of the positive contribution of Chinese investment in Africa, surpassing the United States in all categories. As many African leaders know, without China’s contribution to Africa’s development, especially in infrastructure, Africa would be worse off. There is absolutely no indication that the U.S. and the West would fill that void.

It is undeniable that China has invested heavily in the development of Africa over the last two decades. Ignore the claptrap allegations of a deliberate Chinese debt-trap policy to seize control over Africa’s resources. It is nonsense and has not happened; not once, not in a single African nation.

According to CARI’s data base, from 2000-2019, China has made $157 billion in loans to Africa. Of these 1,077 loans, 85% have been in categories of infrastructure, of which 65% have been in energy and transportation. According to CARI, only 13% of Africa’s debt is owed to China. The largest portion of Africa’s debt is owed to multilateral institutions at 32%, followed by loans from private bond holders. Outside of Angola, only 8% of Chinese lending was for resource backed loans. 90% of the contractors in Africa from China are private Chinese companies, not state owned enterprises (SOEs). Also, 90 % of Foreign Direct Investment (FDI) is from private Chinese companies, although SOEs are the largest investors in Africa in total value.

President Biden has recently suggested that the U.S. and Europe should lead a western version of China’s Belt and Road (BRI). If it were to be as productive as China[‘s (BRI), African nations would benefit greatly, especially in this challenging economic period.

“Make no mistake, Chinese state-owned enterprises (SOEs) are still the largest investors in Africa by value and continue to dominate the energy, transportation and resources sectors due to the strategic nature and long-haul return of these investments. For instance, one third of Africa’s power grid and energy infrastructure has been financed and constructed by state-owned Chinese companies since 2010. China is the most significant foreign contributor through SOEs and state-owned banks to Africa’s energy development.

“By 2034, Africa’s labour force is forecast to surpass that of China and India combined. By 2050, the African population is expected to be 2.5 billion, while China’s population will decline to below 1 billion. With these figures in mind, Africa’s young labour force is exactly what China’s labour-intensive manufacturers seek today.”

Read: Why Substantial Chinese FDI Is Flowing into Africa”

subsidized foreign aid concessional loans–is the largest and since 2000 accounts for 56 percent of all loans.