Jihadists And Terrorists Next Door 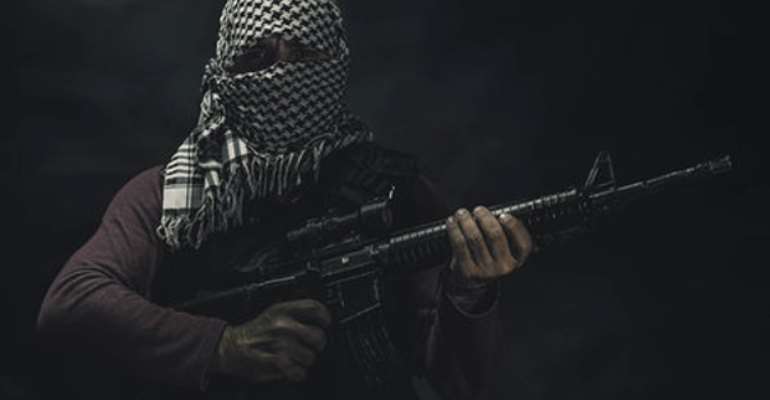 We are living in bad times and only God knows how we can survive this onslaught. Yes, we believe the battle is the Lord's but we have to help ourselves, for God helps those who help themselves. Set aside for the moment the coronavirus pandemic and let us focus instead on the threat of jihadists and terrorists who live just next door. When you live in a country which is undoubtedly a haven and oasis of peace and tranquility, and you are surrounded by other countries where peace is as elusive as a pin in the ocean, you don't take things for granted.

The Ansar Dine terrorist group is operating in nearby Burkina Faso and causing havoc there. They started in Mali and Niger, and before the people of Burkina Faso, a country dominated by peaceful citizens could draw a bucketful of water from their wells, these criminals came storming in their cities and villages. They left behind several people dead and others maimed while greater number of villagers run to save their lives in refugee camps.

Terrorists from Burkina Faso do not need a passport nor visa to enter Ghana. In fact, they do not need to pass through the official border at Paga to enter Ghana. Go to Paga and see things for yourself. The border is so porous that one can enter Ghana from Burkina Faso from many bush paths dotted around the barrier. The security personnel stationed there know all the unapproved entry points but because they gain from such illegal activities, they look the other way as people go and come, unhindered.

Now that these terrorists and jihadists operate freely in our northern neighbour, what can we do to avoid similar occurrence in our peaceful country? So far we have been lucky but for how long should we fold our arms to wait for what will happen? I am aware security issues are not made public but the issue of terrorists operations is something that should be made public for the citizenry to be on the lookout.

For more than five years, Boko Haram insurgents have been causing havoc in Nigeria, and they seem unstoppable. The mighty Nigerian army seems to be helpless in the fight against these Islamists even though the army is well equipped and highly resourced. This is my worry because if they decide to strike in Ghana, we will be helpless. And to enter Ghana, they need not come through the Aflao border, which is also porous. They know the safest way to come to Ghana is through Lama Kara in northern Togo, through Dapango (not Damango in Ghana) to Bawku.

The situation in Ivory Coast, our western neighbour, is more serious. Only last week the ISIS did strike in that country, killing three security officers and later vanished into thin air. As for our border with Ivory Coast, there is nothing good to write home about. Just go to Gonokrom and Kofi Badukrom near Dormaa Ahenkro and see how one can easily enter Ghana from Ivory Coast without passing through the official border posts. People from Ivory Coast have their farms in Ghana and likewise Ghanaian farmers easily walk to their farms in Ivory Coast. In all these instances, the only way we can check the influx of these criminals is through intelligence and vigilance. And are we vigilant enough to identify these guys who are so smart? And of course, are our intelligence officers up to the task? For now the pendulum is swinging right but what if it starts to swing left?

The Atlantic Ocean lies down south with its yawning mouth, ready to receive whosoever wishes to enter Ghana through that corridor. We should not deceive ourselves into thinking that the Ghana Navy is capable of warding off any attack that may come from our territorial waters. The few speedboats we have acquired for the Navy can do little to keep terrorists at bay if they try to use our waterways to enter. Terrorists who want to launch surprise attacks prefer to use the sea, and so that should be our worry as well.

Jihadists and Islamists are enemies of freedom and peaceful co-existence. These sick brains are to terror what the Mafia is to crime, but their goal is not making money like the Mafia. Their goal is remaking the world and imposing their radical beliefs on people everywhere. Theirs is theology by terror and they practice a fringe form of Islamic extremism that has been rejected by Muslim scholars and clerics everywhere. Terrorists pervert the peaceful teachings of Islam. In their moment of madness, they do not make distinction among Christians and their own Muslim brothers, women and children. They wake up in the morning and do nothing but to plan evil and destruction. They even don't know that he who commits murder in the name of Allah blasphemes the name of Allah. So when they cut the throat of their fellow human being, they shout: “Allahu Akbar” (God is great), which to me bothers on absurdity and sheer ignorance if not madness.

The whole world is faced with the threat of jihadists, but as the Akans say, if a stone is coming from the sky, each and every one covers his own head with his hands. You won't see a situation where people cover the heads of others when a stone is coming down from the sky. We are faced with new and sudden challenges and we must fight these challenges by ourselves. The advancement of human freedom, the greatest achievement of our time, and the hope of every time now depends on us and we must not fail our generation.

Islam is peaceful and it is practiced by millions if not billions across the world. The teachings of Islam are good, but these terrorists are traitors to their own faith, trying to hijack Islam itself. These terrorists kill not only to end life but to also disrupt a way of life. Their modus operandi is complex, tricky and dangerous. When they enter a country like Ghana, they first visit mosques to pray with their Muslim brothers and pretend they came with good news. If you allow yourself to be deceived by their pretenses of piety, you are doomed. Because Muslims are well known for their show of hospitality to strangers, particularly those who worship with them, these terrorists warm their way into society in a matter of time. They then start interacting with the youth and start brainwashing them. Before one could blink an eye, these scatterbrains would be seen teaching in Islamic schools in the Zongos where they recruit the youth through juicy promises. Vigilance should be our guard post at the Zongos. Good Lord, looks as if I am becoming addicted to Havana cigar again!!!