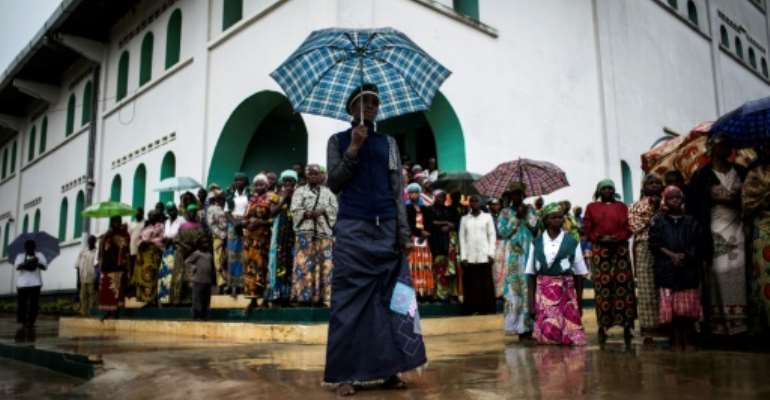 A Christian religion born in the Belgian Congo, the Kimbanguist Church, celebrated its 100th anniversary Tuesday in the holy town of Nkamba, joined by President Felix Tshisekedi.

The presence of the Democratic Republic of Congo's president reflects the powerful reach of the Kimbanguist movement and its allegiance to the authorities, in contrast to Roman Catholics in the front line of social and political protest.

In a distinctive trait of the Church founded by "Papa" Simon Kimbangu in April 6, 1921, thousands of people in Nkamba, the Church's "New Jerusalem", wore the white-and-green skirt of his disciples.

Social distancing and masks were absent.

"We Kimbanguists, we believe in God. Here, there is no sickness, no Covid, nothing of that kind. Papa Simon Kimbangu will always protect us," an engineer, Founix Kahangu, said to applause from pilgrims.

The town in Kongo Central province, about 200 kilometres (125 miles) west of Kinshasa, was once the capital of the prestigious Kongo kingdom, before Europeans arrived in the 15th and 16th centuries.

Tshisekedi, a member of an evangelist church, was awaited in an imposing white temple standing at the end of a long dirt path that some liken to the Stations of the Cross in the Christian tradition. 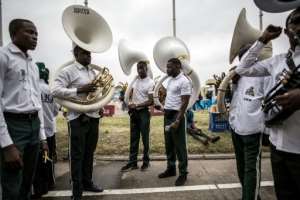 A Kimbanguist orchestra performed at a memorial for Tshisekedi's father Etienne in 2019. By John WESSELS (AFP/File)

He paid tribute to the founder Kimbangu as a "prophet of the liberation of the black man" whose memory should be cherished for generations to come.

To the applause of barefoot pilgrims, Tshisekedi suggested that April 6 be declared a public holiday for which workers should be paid.

The Kimbanguists swore allegiance to Tshisekedi after his inauguration in January 2019 and support his Sacred Union of the Nation political alliance, which has swept aside supporters of his predecessor Joseph Kabila. 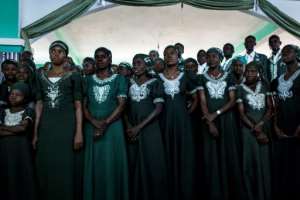 The Church's traditional colours are white and green. By JOHN WESSELS (AFP/File)

But the Kimbanguists also backed Kabila and his father before him, Laurent-Desire, as well as the longtime dictator the rebel senior Kabila ousted in 1997, Marshal Mobuto Sese Seko.

"Respect the authority of the state" is the first of 12 precepts for the faithful, followed by a list of bans, which include proscriptions on drinking, smoking, dancing -- or watching those who are dancing -- and sleeping naked.

Law-abiding Kimbanguist leaders also urge followers to pay their taxes and "to love near ones and enemies".

"The Kimbanguist Church closely collaborates with all the established powers. We are apolitical," Apo Salimba, a senior aide to spiritual chief Simon Kimbangu, the grandson of the founding father, told AFP.

Since the year 2000, the faithful have been observing Christmas on May 25, the traditional date of Jesus Christ's birth, as well as the birthday of Kimbangu's son Salomon Dialungani, who died two years later.

The DRC's more than 80 million people are currently estimated to be 40 percent Roman Catholic, 35 percent Protestant, 10 percent Kimbanguist and nine percent Muslim, but the last census was carried out in 1984.

The Kimbanguist Church claims millions of members worldwide and is distinct in both its religious tenets and its political outlook from the Catholic Church, whose leadership in the DRC regularly denounces the selfishness of politicians, bad governance and corruption undermining the giant of sub-Saharan Africa.

Catholics spearheaded three street protests against Joseph Kabila early in 2018, when marchers were met with live ammunition and some 15 people were killed.

From the outset, the Kimbanguist Church put up resistance to colonial forces, while the Catholic Church "has been historically associated with Belgian colonisation", said researcher and historian Sebastian Fath.

Kimbangu was born in 1899 as Belgium's brutal colonial rule over Congo was in full sway. 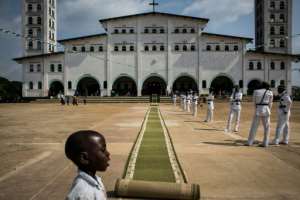 Nkamba's Kimbanguist temple during 2017 Christmas celebrations, observed in May instead of December since the year 2000. By JOHN WESSELS (AFP/File)

In 1921, he was credited with the cure of a sick woman -- an event deemed a miracle, and one that led to birth of his Church, which incorporates many elements of Christianity imported by missionaries but with adjustments to local culture.

Kimbangu exercised his authority for only five months, but his preaching resonated with a colonised people ready to hear a message of emancipation.

The Belgian overlords arrested him and presented him to a military court.

"I limited myself to preaching the gospel of Jesus Christ," Kimbangu told judges when accused of endangering state security and the colonial order.

He was sentenced to death but ultimately was locked up for 30 years. He died in 1951 on the day his grandson was born and became the Simon Kimbangu who heads the Church today.