Efforts continue to get US back to Iran nuclear negotiating table 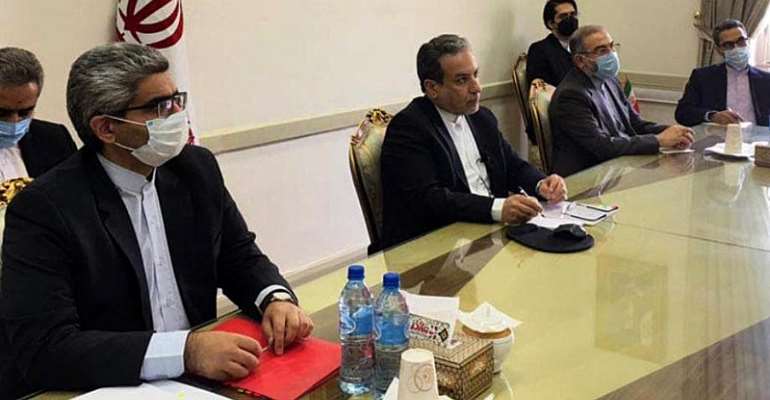 Efforts to bring the United States back into the 2015 deal on Iran's nuclear programme stepped up a gear on Tuesday after Iran and the five world powers remaining in the accord started meetings in Vienna. The US is due to open indirect talks with Tehran.

Friday's announcement that Washington and Tehran would begin indirect talks through intermediaries was one of the first signs of tangible progress in efforts to return both nations to the terms of the accord, which bound Iran to restrictions in return for relief from US and international sanctions.

The EU took the lead in attempts to get the US back to the negotiating table, when a virtual meeting of the commission overseeing the Joint Comprehensive Plan of Action (JCPoA) was chaired by the EU's External Action Service deputy chief, Enrique Mora.

The latest moves follow weeks of haggling between Iran and the US over conditions under which negotiations could begin again, with Tehran demanding that Washington abandons all sanctions first, and Washington saying it will not budge until Tehran reverses steps it took after Donald Trump, the then president, walked away from the JCPoA in 2018.

US State Department spokesperson, Jalina Porter, said in a press briefing last week : "We're going to talk about nuclear steps that Iran would need to take in order to return to a compliance with the terms of the JCPoA.

"And . . . sanction relief steps that the US would need to take in order to return to that compliance as well will be up for discussion."

'Terrible deal'
The JCPoA, signed on 14 July 2015 between Iran and the five permanent members of the UN Security Council (France, the UK, the US, China and Russia) plus Germany (the "P5+1"), was intended to curtail Iran's nuclear programme in exchange for a gradual lifting of sanctions.

Trump re-certified the deal three times but consistently criticised the agreement as "terrible," "laughable" and "horrible," even though the then US Secretary of State Rex Tillerson still said in late 2017 that Iran was in technical compliance with the agreement.

James Mattis, the defence secretary at the time, advised Trump to consider staying with the JCPoA.

In October 2017, possibly influenced by the relentless lobbying of Iran's arch-enemy Israel, Trump stopped re-certifying the deal, and on 8 May 2018, he unilaterally pulled the US out of the accord, swapping to what he called a "maximum-pressure" campaign of increased US sanctions.

Putting pressure
Since then, Iran has been steadily violating key elements of the deal, such as the amount and purity of enriched uranium Tehran can stockpile.

Those violations have clearly been aimed at putting pressure on the other nations in the deal to do more to counter the crippling sanctions reimposed under Trump.

China and Russia opposed Washington's unilateral action from the outset, while the E3 (France, Germany and the UK) took some steps with the creation of Instex, a financial tool that allowed EU countries to trade with Iran while avoiding US sanctions.

But Instex never really took off and Iran's increasing reluctance to comply with the deal deepened dramatically after the assassination by unknown assailants of Iran's foremost nuclear scientist, Mohsen Fakhrizadeh.

Biden wants back
President Joe Biden came into office saying that returning to the accord and getting Iran's nuclear programme back under international supervision were priorities.

But Iran and the United States have disagreed over Tehran's demands that sanctions be lifted first.

Iran's Mehr News Agency said that even though US and Iranian delegations will attend the gathering, there will be no direct meeting between Tehran's negotiators and those from Washington who are led by the administration's special envoy for Iran, Rob Malley.

"Today we are witnessing a new chapter in the process of defeating coercion and reviving the JCPoA," Iran's government spokesperson Ali Rabiei was quoted as saying.

Working groups
"As we predicted at the height of the Trump administration's bullying and pressure, the United States eventually, frustrated by the wrong path, admit that maximum pressure has failed and that there is no choice but to revive the JCPoA and get all parties back to their commitments," he said.

Rabiei's US counterpart, State Department spokesperson Ned Price, said talks would be structured around working groups that the Europeans will form with the other parties to the accord.

Price said: "The talks are a healthy step forward but we don't anticipate an early or immediate breakthrough as these discussions, which, we fully expect, will be difficult.

“We don't anticipate at present that there will be direct talks with Iran," he added. “Though of course we remain open to them. And so we'll have to see how things go starting early this week.”

EU sanctions on hold?
Meanwhile, Reuters reported on 31 March that the EU was set to sanction eight Iranian leaders of the Basij militia and the police and three state entities for human rights abuses connected to the crackdown against demonstrations in 2019 when hundreds of people were killed.

If imposed, it will be the first time since 2013 that Brussels has taken punitive steps against Tehran.

Diplomats told Reuters that the EU will impose travel bans and asset freezes. The names of those sanctioned will be published this week.

"Those responsible for serious rights violations must know there are consequences," an EU diplomat said.

However, Brussels did not confirm the information and it remains unclear if sanctions will be enforced in a week that is seen by many as offering a possible breakthrough on the Iranian nuclear issue.