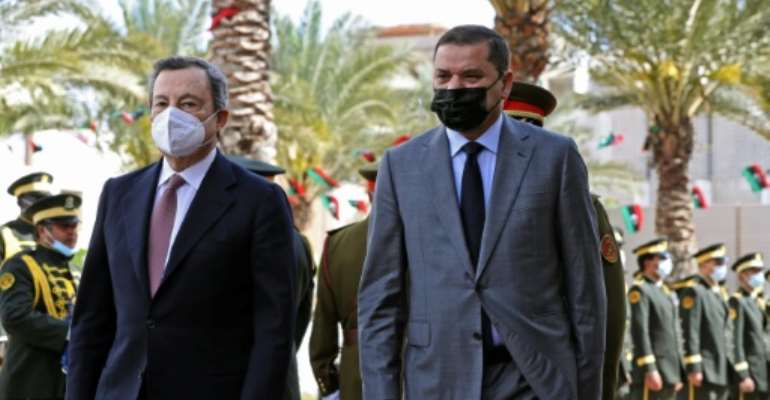 The prime ministers of Italy and Greece on Tuesday joined a growing number of foreign leaders visiting Libya as it seeks to end a decade of post-revolution chaos under a UN-sponsored peace process.

Italian Prime Minister Mario Draghi, whose country was the former colonial power in the North African state, held talks in the capital Tripoli, making his first trip abroad since taking office in mid-February.

"This is a unique moment for Libya" with a new unity government in place, Draghi told a news conference, standing alongside interim Prime Minister Abdul Hamid Dbeibah.

Draghi said it was time "to rebuild what is an old friendship and a closeness that has never been broken".

Italy's embassy flew the flag as the "only" Western diplomatic mission to stay open through "all the long years of conflict" that followed Libya's 2011 revolution that toppled dictator Moamer Kadhafi, he said.

Draghi also expressed "satisfaction" with Libya's missions at sea to intercept and rescue migrants trying to reach Italy, some 300 kilometres (190 miles) north across the Mediterranean.

Italy is a major commercial partner for oil-rich Libya, where its energy giant Eni is a key player.

"We have numerous issues of common interest," said his Libyan counterpart Dbeibah, calling for Italy to reopen its airspace to Libyan aircraft.

No foreign airline currently flies to Libya for security reasons.

International flights -- to Tunisia, Turkey and Egypt -- are operated by Libyan companies, which do not have access to European airspace.

Greek Prime Minister Kyriakos Mitsotakis was due to arrive in Tripoli later Tuesday to reopen his country's embassy, following the example of France and Malta.

During Libya's conflict, Athens backed eastern strongman Khalifa Haftar, after a UN-recognised Government of National Accord signed a controversial maritime agreement with Turkey in 2019.

Athens is fiercely opposed to the deal with Ankara, which claims much of the Mediterranean for energy exploration, conflicting with rival claims by Greece and Cyprus.