Airport Company workers agitation: If the MD has embezzled funds, we should sack him — Says Otumfuo as he demands investigation 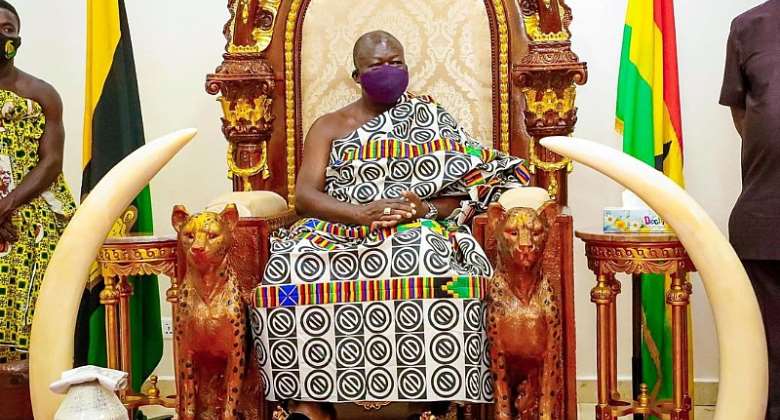 The Divisional Union of the Public Services Workers Union (PSWU) at the Ghana Airport Company Limited claims the Board of the company is shelving a report which confirms allegations of mismanagement and abuse of office levelled against Mr. Kwakwa.

In an interaction with the Transport Minister, the Asantehene said if the investigation shows Mr. Kwakwa is complicit then, he must be sacked; otherwise, he should be allowed to do his work.

“I don't know why the workers are agitating but Kwakwa is doing very well. So please investigate it and let me know the outcome.”

“The workers' agitation may be fuelled by someone who perhaps is interested in the position Yaw Kwakwa is occupying. So please investigate it and let me know the outcome. If Kwakwa has embezzled funds, we should sack him. But if he’s working hard to service this loan, he should be encouraged and supported to continue his work,” the Asantehene said.

The agitation from workers led to a strike on February 27 over the malfeasance allegations against Mr. Kwakwa.

The union has previously agitated over this same issue and also petitioned President Akufo-Addo on the matter.

In the petition, the workers said Mr. Kwakwa had demonstrated “gross incompetence, insensitivity and lack of understanding of the critical aviation industry and therefore his continuous stay in office will further derail the progress of the company”.

They accused Mr. Kwakwa of deliberately refusing to implement several reports lying on his desk for over two years and outsourcing key aspects of the company's operations at exorbitant costs despite the availability of in-house capacity.

Latest Photo Reports
Catch up with all the political quotes from our politicians.
Advertise here
More Headlines
ModernGhana Links
‘I’ve been charged with careless, inconsiderate driving; I need 2 sureties at Madina District Court’ — Oliver Barker-Vormawor
Togo officially opens land borders
James Gyakye Quayson’s review application case adjourned again
No one is above the law except the President - Oliver Barker-Vormawor says after arrest
The poor will soon resort to fasting due to the high cost of food – Joe Jackson
Oliver Barker-Vormawor re-arrested, whereabout unknown
Join NDC and let’s rescue Ghana from the torturing policies of the NPP – Duffuor to Ghanaians
Ghana in crisis, running into debt after Ghanaians voted me out – Mahama
'No further development at Bulgarian Embassy pending court cases’ – Lands Ministry
TOP STORIES

No one is above the law except the President - Oliver Barker...
53 minutes ago