Kwame A PLUS' TPP: A threat to national development 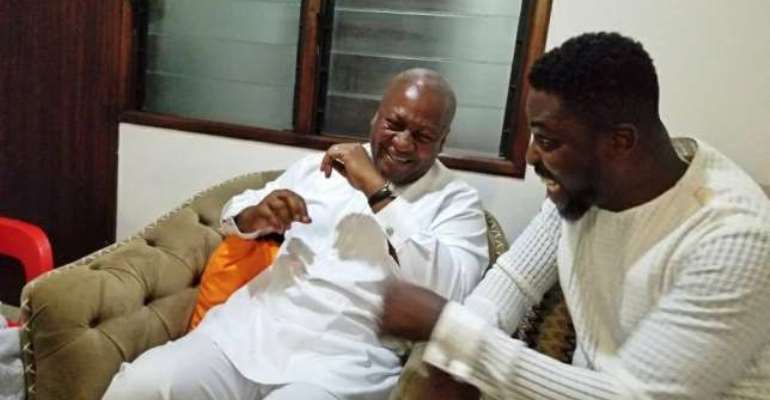 Loudmouth Kwame A Plus had gained prominence in our body politics over his sudden criticism of the New Patriotic Party and Nana Akuffo Addo. A plus was once with the rank and file of the NPP party after having sung many songs in favour of the party. Before winning the 2016 elections, Kwame released his famous “aben be bom” implying that NDC is looting the country’s resources and will soon pay for it.

After NPP won power, A Plus was awarded some juicy contracts and all was well. Everything begins to turn sour when some bitterness broke out between him and some party faithful and the said contract was taken away from him. The controversies became never-ending and A Plus's love for NPP and Nana suddenly swung to what he now called The People’s Project (TPP).

A Plus cannot be smart enough and his sudden ‘u-turn’ is turning into a nightmare for him. He is itching to identify something untoward about NPP and Nana to criticize or bastardize. Everyone knows that disgruntled A Plus lost touch with NPP because certain matters that came to the public domain indicated some squabbles that had ended in dissensions. A Plus wants every Ghanaian to believe that he is independent in his thought and actions and that he is being led by his conscience.

The question now comes to mind as to whether A Plus is not nurturing an ambition for future political gains. All politicians or potential politicians are tactical, they will want to look important first by means of pretending to be neutral and then later they quickly take a side. A Plus forming TPP was just part of his political ambition nurturing.

The People’s Project is on course and its leader and founder are on the loose. Recently he had added up to his criticisms by saying that ‘Ghanaians voted for Nana Addo so that they can see how fake he is”. Seriously, A Plus this getting out of hands. So A Plus wants us to understand that the TPP was formed to do pedestrian politics or what? Or he just forms the TPP to criticize where there are no criticisms or just that he wants the voice of TPP to be heard.

A Plus has lost touch with the masses and people are beginning to become wary of him. His TPP is gradually turning into a threat rather than contributing to national discourse. Why would not the TPP suggest alternatives any time they get the opportunity to criticize or run down the government? Does it mean TPP is only specialized in identifying faults rather than bring out alternative solutions?

It will not surprise anyone if A Plus begins to accept to be part of NDC in no distant future. Should NDC take over the political mantle, I am sure A Plus will be rewarded including his TPP for his current position on the government. TPP is clandestinely doing the bidding of the opposition party notably NDC and soon the very reason for the TPP action will be unveiled to the whole world. As for A Plus and his TPP, time is just a factor and it will soon reveal their true nature and intentions whether they are nationalists or propagandists who want to build a political future with their disgruntled attitude.