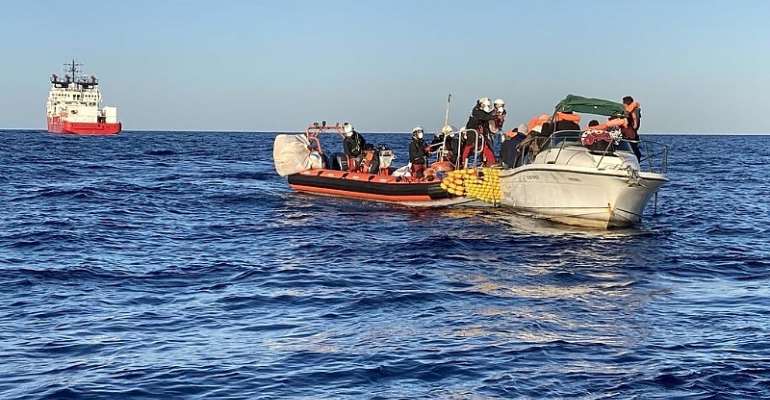 Over the past week the Libyan coastguard says it has rescued over 1000 migrants trying to cross the Mediterranean to reach Europe. As the summer approches, NGO rescue vessels such as Ocean Viking are bracing for an increase in crossings and have expressed doubt over the Libyan authorities' commitment to the well-being of migrants.

Only two days before, the International Organization for Migration said Libya's maritime authorities had intercepted almost 1,000 migrants in as many days.

NGOs and international agencies have denounced the EU-backed policy of returning migrants intercepted at sea back to Libya, due to the political chaos in the country and the notoriously poor conditions in detention centres.

RFI political journalist Guilhem Delteil spent the past three weeks on board the Ocean Viking, a rescue vessel owned by the SOS Méditerranée NGO, operational in this capacity since 2019.

Since joining the crew of the ship at the beginning of March, he has witnessed the rescue of at least 116 migrants in two intercepts that took place in international waters.

Maritime rescue and the rules of engagement

"The Ocean Viking and other NGOs never enter [Libyan] waters, but they are only 12 miles from the coast," explains Delteil. "The search and rescue zones are in international waters but it's a part of the sea where each country is supposed to coordinate search and rescue operations... when there's a boat in distress they have to call the boats navigating around it - it could be a private boat or any kind of vessel in the zone - and say 'okay, please help save and rescue with disembarkation'."

"These boats leave Libya in the middle of the night, around midnight, to try to be discreet and escape the coastguards. They will have been navigating for many hours in international waters... so haven't slept during the night: They're thirsty, they're dehydrated, they're exhausted, they're wet... and they're cold because water is coming inside the boats," says Delteil, who is currently still in quarantine on the Ocean Viking ahead of disembarkation next week in Sicily.

Calm seas can suddenly become rough and choppy on the Mediterranean he explains. "In those rubber boats there's no real protection from the water," Delteil adds, "so water was coming inside and they were all wet and cold. When they get on board they get dry clothes and usually spend the afternoon sleeping."

However, their predicament on the open seas appears to pale in comparison to the conditions of their detention in Libya.

"They all tell the same stories of the torture and mistreatment they've suffered in Libya. A topic that comes up very often in their testimonies is what they call 'prisons'. They're not always real prisons because most of those prisons are run by armed militia, not government forces," recounts Delteil.

"Even going out in the streets in Tripoli is dangerous for them as they can be kidnapped ... then sent to some detention centre where they are forced to pay money to exit. As long as they cannot pay they suffer torture and are abused in many different ways until their families somehow gather the money [to release them] from those prisons."

Since being deployed in the Mediterranean two years ago, the Ocean Viking has had its fair share of run-ins with port authorities around the Mediterranean, having been refused the right to dock by Maltese and Italian coast guards.

But it has also engaged with the Libyan coast guard, whose motives have been questioned by rights groups when it comes to dealing with the migrant situation on their shores.

"The Libyan maritime authorities are supposed to coordinate the search and rescue activities. But what the crew of the Ocean Viking and all the NGOs are saying is the Libyans do not play this role and there is no coordination in Libyan search and rescue zones."

During a one of the rescues that Delteil witnessed, the Libyan coast guard commandeered one of the migrant vessels after threatening to force the migrants overboard.

"We received a call from the Libyan coast guard boat ... which was asking us to rescue a small boat in which there were 10 Libyans fleeing their country," he says.

After the people were taken on board, one of their party got back in the dinghy and the coast guards set off for the shore, pulling the boat behind them.

According to the testimonies he heard on board, that person was actually a member of the coast guard.

"[The coast guards] came close to [the migrant vessel] a few minutes before they reached the Ocean Viking and threatened them saying 'you have a choice. Either we take you to the Ocean Viking and take your boat back to Libya or we'll leave you here in the middle of the sea'," says Delteil.

EU diplomacy will not help migrants' plight
And it is this cycle of cynical opportunism and racketeering that has permeated the so-called authorities in Libya who don't answer to any centralised government or government institution.

But now there's a new government of national unity in Tripoli, the European Union is scrambling to regain its influence in the country, which has been the stage for international players to flex their mercenary muscle - from Turkey and Qatar on one side, to Egypt, Russia and the UAE on the other.

Yet this EU drive to find its currency in the rebuilding of Libya will not likely change the gratuitous exploitation of migrants within its borders.

"I don't see any scenario where the detention centres will disappear," Delteil says. "In Libya there is only the rule of weapons and I don't see this disappearing anytime soon. Is the European Union playing a humanitarian role at the moment? It's difficult to say... at the same time they're trying to rebuild a state. But from an immediate perspective it's difficult to call this humanitarian action."

Guilhem Delteil is a journalist with RFI Politique (French service), who spent three weeks on board the Ocean Viking in March 2021.