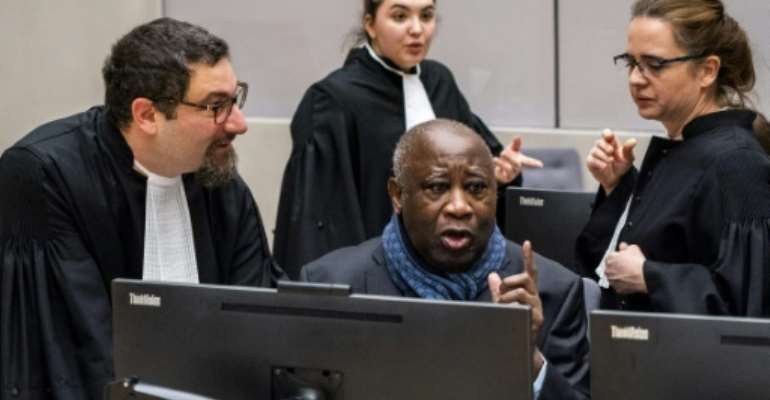 Gbagbo, shown here at the ICC in February, plans to go home if Wednesday's decision goes his way. By Jerry LAMPEN (ANP/AFP/File)

The International Criminal Court on Wednesday upheld the acquittal of Ivory Coast's former president Laurent Gbagbo on crimes against humanity charges, paving the way for his return home after a decade away.

Judges dismissed an appeal by prosecutors against the ICC's 2019 shock decision to clear Gbagbo and his former youth leader Charles Ble Goude over a wave of post-electoral violence in 2010-11.

The first head of state to stand trial at the tribunal, Gbagbo, 75, had denied all charges over the bloodshed in which 3,000 people were killed after he disputed the results of the 2010 vote.

Appeals judges "reject the appeal of the prosecutor and confirm the decision of the trial chamber" which dismissed the case against Gbagbo and Ble Goude in 2019, presiding judge Chile Eboe-Osuji said.

Gbagbo was in court for the verdict.

Gbagbo has been living in Brussels under the court's orders since his release from detention in 2019, but had planned to return to Ivory Coast if cleared, thanks to an olive branch offered by his erstwhile rival Alassane Ouattara.

After elections in 2010, Gbagbo refused to hand over power to Ouattara, the current president, but French troops eventually intervened and Ouattara's loyalists drove Gbagbo from his bunker.

Gbagbo's trial started in January 2016, but three years later judges said they had found that prosecutors had "failed to satisfy the burden of proof to the requisite standard."

Gbagbo's acquittal was one of the ICC's biggest failures since it was set up in 2002 as the world's only permanent war crimes court.

Prosecutors then appealed, focusing on what they said was a procedural error when judges in 2019 did not make a proper written judgment but handed down the decision orally.

The verdict on Wednesday was being closely watched in Ivory Coast, where Gbagbo's shadow still hangs over a nation that remains mired in political crisis.

Gbagbo was president from 2000 to 2010, a time of turmoil in the world's top cocoa grower, formerly a haven of peace and prosperity in troubled West Africa.

His old foe Ouattara ignited fresh unrest last year when he announced he would seek a third term in office -- a scheme that critics said sidestepped constitutional limits.

Clashes claimed 87 lives while most of the opposition snubbed the October ballot -- which Ouattara won by a landslide.

But after Ouattara offered to give Gbagbo passports to aid his return, Gbagbo's Ivorian Popular Front (FPI) party ended a years-long electoral boycott.

Wednesday's judgment was key for the credibility of the ICC after a series of high-profile failures and controversies over the fact that it has largely focused on African suspects.

Bensouda meanwhile is under US sanctions for an ICC probe into Afghanistan, while her investigation into the Palestinian territories has enraged Israel and Washington.

Collaborate with NIA to end compilation of new voters’ regis...
34 minutes ago