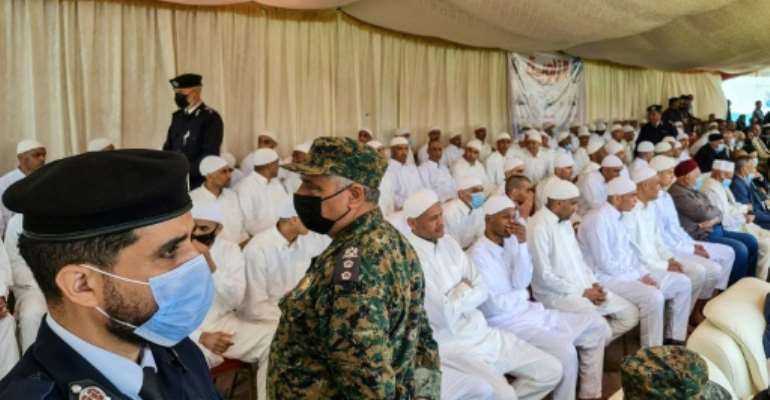 The release of 120 captured pro-Haftar fighters was another move towards reconciliation after years of division in Libya. By Mahmud TURKIA (AFP)

Authorities in western Libya released 120 fighters from a rival eastern force on Wednesday, the latest move towards reconciliation in a UN-backed peace process after years of violence.

The men were fighting for the 107th Brigade under the command of eastern military strongman Khalifa Haftar, who in April 2019 launched an offensive to seize Tripoli from a unity government.

The fighters had been captured near the western city of Zawiya that same month.

On Wednesday, dressed in loose white cotton and matching skullcaps, they were released following a ceremony in Zawiya, 45 kilometres (30 miles) east of Tripoli.

Abdallah al-Lafi, vice-president of the country's new presidential council, gave a speech in which he praised the liberation of the prisoners as "a concession in the interests of the nation" and called for further reconciliation and rebuilding.

After the ceremony at a sports ground in Zawiya, the prisoners were released and reunited with their families.

Libya has been ravaged by bloodshed since the fall and killing of dictator Moamer Kadhafi in a NATO-backed 2011 revolt.

An array of armed groups arose to fill the vacuum, and many coalesced around the unity government or around Haftar, who backed an eastern administration.

The two camps, each supported by foreign powers, fought for more than a year before Haftar was forced to retreat.

In October they signed a truce, setting in motion a UN-led process that saw a new transitional government installed in February.

The deal had also led to the release of several dozen prisoners by January.

The new executive is charged with organising national elections set for December 2021.