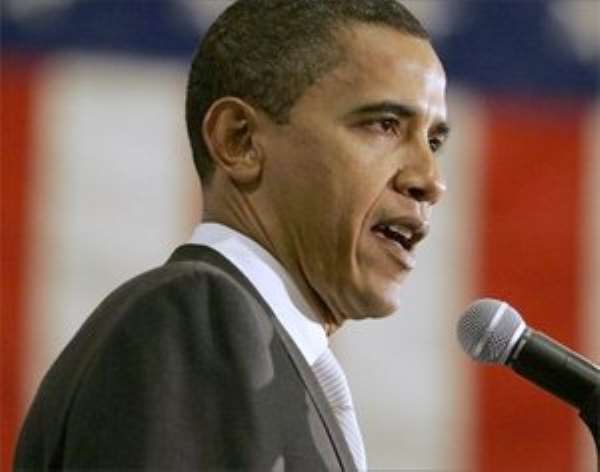 Before standing for election Barack Obama was not all that in line to be labelled "The first Black American President" as his mother is a white American citizen while his father is a black Kenyan citizen. By definition of the slave laws, anyone with only one drop of "black blood" is defined as a black person; meant to keep both races apart from each other to realize any white man's child with a black woman would be a slave too. While in Europe, Africa, Asia, Arabia and South America such children are seen as mixed-raced only.

Eventually, Barack Obama accepted the labelling by the press, the public and his campaign team to be described as a black candidate to increase his chances of winning and once in the Oval Office to work with might and power for justice to be served to the Blacks in his country. Could he not have done better and rejected the false claims to be black instead of mixed-raced to tell his true personal story?

Interesting to observe: when Africans get the Green Card or any other opportunity to relocate to the USA not only are they mostly better educated compared to their American counterparts but unconcerned about the historic problems Blacks faced in the USA and until today. They do not regard themselves as victims of the White Man rather focus on the opportunity to make it in life great.

For Barack Obama to stand on one side of history, the black community, to address the white community and bring peace among them would have certainly worked much better with more elements of a role model to be followed if he had only allowed being labelled correctly as mixed-raced to mighty demonstrate incarnated in himself the love that is in a relationship between black and white reflecting the American dream that all are equal and can live their dream to be happy and prosperous. This could have made him a symbol to unite both races and bring healing to both sides instead of being trapped once more in the sad categories of different races and their social, economic and political fortune or misfortune inflicted on each other. This can be seen as one part of the problem that during his years in office many Blacks died at the hands of Whites instead of bringing both sides closer to each other.

Only Politicians and Americans will finally understand why Barack Obama did not honour his mother but only his father based on the rules of the old slave laws while he had a historic chance in him to unite his people after centuries of fights and inequality and be called "The first mixed-raced President of the USA". This would also have helped the movements around the world much better.