A health worker at a local health centre in Kinshasa, Democratic Republic of the Congo, prepares a vaccine injection. (Courtesy UNICEF/Sibylle Desjardins)

Dr. John Nkengasong, director of the Africa Centers for Disease Control (CDC), Dr. Nicaise Ndembi, senior science advisor for the Africa CDC, and Dr. Akinwumi Adesina, African Development Bank President, have all spoken out on the need to vaccinate Africa’s more than one billion people. Dr. Adesina speaking earlier this month at the launch of the Bank’s African Outlook 2021 report said, “We need global solidarity and vaccine justice for Africa…as long as Africans remain unvaccinated the world will go back to square one.”

On a March 25 webinar, organized by the Advocacy Network for Africa, and Africa Rising, Dr. Nkengasong echoed the same immediacy for Africa to vaccinate its people against Covid19. He told his audience; we have more Africans dying from the second wave of Covid19 and there is potential of a third wave. “We need vaccines today” he said.

All African Must Be Vaccinated!

Dr. Ndembi, speaking on the same webinar, outlined the minimal goal of vaccinating 60% of Africa’s population by the end of 2022. Based on his low estimate of Africa’s population at 1.2 billion, he calculated vaccinating 720 million people, requiring 1.4 billion doses of the two dose Moderna and Pfizer vaccines. The one dose Jonson and Johnson could significantly speed up the vaccination process. However, it is unacceptable to plan to vaccinate only 60% of Africa’s growing population over the next 21 months.

Only a small number of vaccines has been delivered to Africa, about 14.6 million doses, according to Dr. Adesina, reported by Reliefweb. The main vehicle for acquiring the COVID-19 vaccines for Africa is the COVAX initiative, led by the World Health Organization and backed by the United Nations. President Biden has authorized $2.5 billion to fund COVAX and pledged another $1.5 billion. However, the U.S. unlike China and Russia, has not donated a single dose of any its three vaccines to Africa.

As all epidemiologists know, as long as large numbers of human beings remain unvaccinated, the virus will mutate, potentially to more contagious and virulent strains, endangering the whole human race. Therefore, it is not only immoral for vaccine producing nations not to vaccinate the populations of all lower and middle income nations, but insanely irresponsible.

For the sake of preserving the wellbeing of the human race, our goal has to be nothing short of complete vaccination of the planet’s eligible population. It is foolish to have poorer nations competing for limited supplies of vaccines. According to Matthew Kavanagh, who participated in the March 25th webinar, sharing the limited supply of vaccines will not be sufficient to defeat the virus. He estimated that given the appropriate support, some African nations could begin producing vaccines themselves in six months. Dr Adesina pointed to the core of the solution; “Africa needs to develop its pharmaceutical industry and begin manufacturing.” There is no viable solution to protect Africa’s expanding population from this virus, other than immediately building up the capacity of African nations to produce and distribute vaccines to their people.

This will require releasing the patents-the secrets of the vaccines, to other nations. Kavanagh, from the Center for Global Health Science and Security, rightly demands that governments “will need to use their legal and political authority to push companies to share their patents and know-how.” He pointed out that the creation of the Moderna vaccine was supported by $2.5 billion of American taxpayers’ money. President Biden’s administration must use every kind of effort to insure that intellectual property rights do not trump the obligation to save lives. 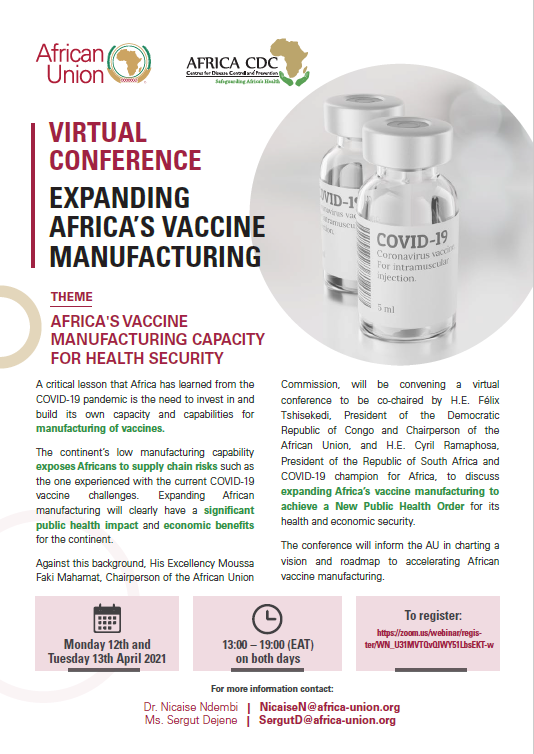 As a result of responding to the spread of HIV/AIDS over several decades and more recently, from several outbreaks of Ebola, Africans have learned some valuable experiences. For African nations to produce and distribute vaccines in sufficient quantities to inoculate over one billion people, new capabilities will have to be added to their diminutive manufacturing sectors. To get the vaccine into the arms of their population, their weak health care system will have to be vastly expanded. This will require implementing economic growth policies that are long overdue in Africa, but under the necessity of defeating the COVID-19 pandemic, must now be immediately executed. This includes massive investment in hard and soft infrastructure. For example. One cannot expect to win the war against this virus, without high-speed rail transportation to move products quickly in refrigerated cars between cities and ports. Without roads, the vaccine will not reach large sections of the population. Of course, more hospitals and well-equipped clinics will be required to be built. Energy will be needed to produce and maintain the quality of the vaccines, as well as providing the power for the manufacturing plants and hospitals. Africa is severely lacking in these and other basic categories of infrastructure.

It is estimated that almost 40 million more Africans will be pushed into poverty this year as a result of the pandemic. I believe that estimate is too low, but it would still represent almost a 10% increase in the number of Africans living in poverty. To respond to the necessity of winning the war against this pandemic, Africa would have to be transformed with immense investments in new infrastructure, production, and industry. Hiring those eager to work in these productive jobs will provide meaningful employment for millions of youths, and those misemployed in the cancerous so called informal economy.

What President Biden Should Do

It is reported that in a recent discussion with British Prime Minister Boris Johnson, U.S. President Joe Biden, proposed that western nations develop a Belt and Road initiative like that of China. Let us start with the African continent, which is projected to have 25% of the world’s population in 2050, with 2.4 billion people.

For a just and intelligent American policy to vaccinate Africa from COVID-19, President Biden should provide leadership in:

Surely for the sake of civilization, America can and must assist African nations to accomplish more than vaccinating just 60% of their population by 2022. If we do not fully vaccinate Africa, then in addition to the loss of life among Africans, the virus would continue to mutate, travel around the world, potentially infecting and reinfecting the world’s population. From a purely economic outlook, the global economy would lose trillions of dollars from underperforming African economies. Let us act nobly and wisely in understanding that when we act in the interest of others, we are also acting in our own interest