Were Ghanaians right in choosing the septuagenarian Akufo-Addo over the sexagenarian Mahama? 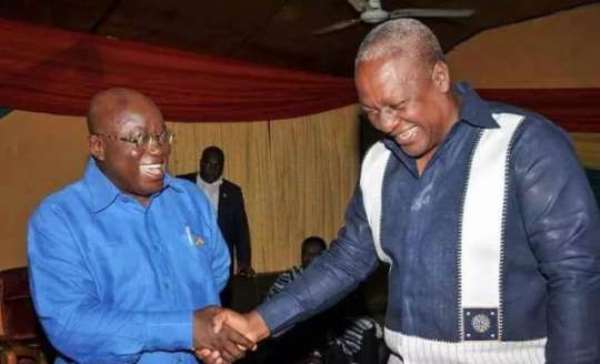 To become a president of a country is a life time privilege which comes with juicy trappings and enormous responsibilities. Thus, someone with vast life experience, a catalogue of suitable employable skills, a portfolio of relevant qualifications, tried and tested competencies and requisite knowledge should be a suitable candidate for the position.

That being said, the emergence of democracy has energised every sound adult Ghanaian to seek to compete for such an important position.

But all said and done, it would be absolutely wrong for anyone to suggest for a moment that every leader can prudently steer the nation to the right direction if given the opportunity.

There is no denying or ignoring the fact that Ghanaians became fed-up with the extreme harsh conditions amid corruption allegations (Bus branding, Brazil World Cup, SADA, SUBA, GYEEDA, SSNIT, MASLOC, NCA, Ford Expedition Vehicle, amongst others).

Unsurprisingly, therefore, on 7th December 2016, discerning Ghanaians found in the septuagenarian Akufo-Addo , a redeemer, in whom they reposed their absolute trust to set them free from the Mahama government’s unpardonable economic enslavement.

Ex-President Mahama abysmally mismanaged Ghana’s economy by moving the economic growth of 14% in 2011 to 3.4% and single digit inflation to 15.4% by December 2016.

Take, for instance, a chunk of Ghana’s scarce resources was wasted on dubious judgement debt payments, purported to be around GH800 million, including the GH51.2 million to Woyome, $30 million to the Waterville and $325,000 to Isofoton which resulted in the drastic reduction of capital expenditure, and as a consequence, most contractors were not paid by the erstwhile NDC administration.

More so, the Mahama’s government wilfully misapplied $175 million loan facility secured in 2012 which was to provide seven district hospitals.

Honestly, but for President Akufo-Addo’s timeous intervention, Mahama’s administration would have shockingly given away over 58% of Ghana’s bauxite to family and friends just about a week before exiting power.

Given the circumstances, the thoughtful critics cannot be far from right for suggesting that if discerning Ghanaians had not graciously intervened by showing the dreadful economic managers (NDC) the exit through the universal adult suffrage, the terrible errors in decision-making and the rampant corruption would have wiped out Ghana off the world map without a trace.

Given the circumstances, it would be unfair for sceptics to argue that all politicians are the same when in power and therefore there is no need to change from one to another.

Let us face it, politicians have different levels of temperament, competence, experience, knowledge, skills and abilities, so they are never the same, as a matter of fact.

In any case, there is enough evidence to counter the sceptics who insist that politicians are the same when in power. Take, for instance, President Kufuor, who worked studiously to move Ghana from the Highly Indebted Poor Country (HIPC) status to a Lower Middle Income status when he took over from former President Rawlings in 2001 cannot be referred to as a laid-back leader.

Interestingly, in the first two years of the Akufo-Addo’s administration, the Industry sector recorded the highest growth rate of 16.7 percent, followed by Agriculture 8.4 percent and the Services 4.3 percent.

Likewise, it will be incongruous to put Akufo-Addo and Mahama in the same basket. This is because, the former has prudently introduced important policies and programmes in a little over four years in power, while the later failed to introduce a single social intervention in eight years.

And the previously double digit inflation (15.8 in December 2016) was reduced drastically to around 7.5% within a short space of time.

It is not entirely correct for anyone to assume that all politicians are the same once they are in their comfort zones and therefore it is a complete waste of time to go out there and vote.

Ghanaians should not make the calamitous mistake by putting all politicians in one basket and thereby unfairly ‘crucifying’ a charismatic leader who can put forward expedient policies such as one district one factory, one village one dam, one constituency one million dollars, Free SHS, amongst others.

Take my word for it, dearest reader, the future is indeed looking bright under the septuagenarian President Akufo-Addo, who against all odds, managed to safeguard Ghana’s bauxite which Mahama’s administration shockingly decided to give away 58% to family and friends just about a week before exiting power.

In sum, we can confidently deduce that discerning Ghanaians made the right choice on 7th December 2016 and 2020 by electing the septuagenarian Nana Akufo-Addo and retiring the sexagenarian John Dramani Mahama.

Massive rot as 9 heads roll at Keta Municipal Assembly over ...
13 minutes ago