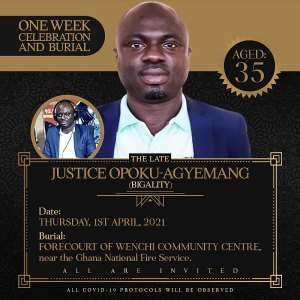 Bigality, died on Thursday, 25th March, 2021 at the Wenchi Regional Hospital after a short illness.

"The decision to bury the late ace broadcaster a week after his demise was influenced by the fact that he was the first child of his mother, Maame Alice Owusu and traditional rites approve of an early burial".

According to the statement ,"This was announced by the family head Uncle Joe Agyemang after a meeting. The funeral Service will take place at the Forecourt of the Wenchi Community Centre, near the Ghana National Fire Service.He left behind a 5-Year-Old Son, Gary Opoku-Agyemang."

Bigality, until his demise was the host of the popular sports show, 'Hot Focal Sports' that airs on Weekdays from 6.30am to 10.00am on Hot 93.9FM.

Meanwhile, a book of Condolence for the late Sports Show host has been opened. Well Wishers, Friends and Sympathizers are welcome to Hot 93.9FM premises in Accra Central, near the General Post Office to sign it.