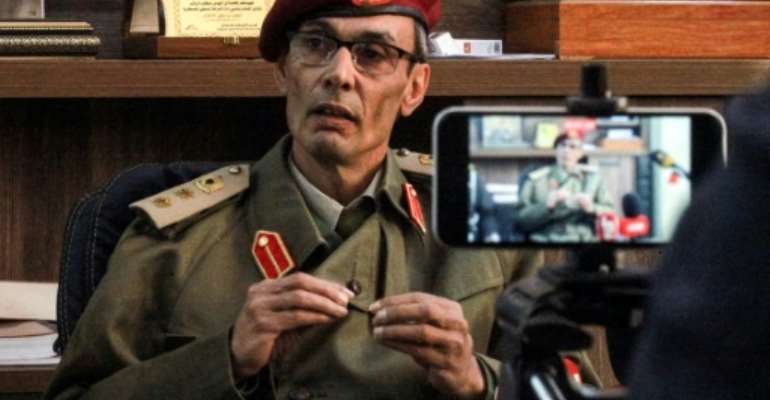 Colonel Ali Madi, head of the military prosecution in eastern Libya's Benghazi, gives a press conference in the city on March 27, 2021. By Abdullah DOMA (AFP)

Libyan authorities Saturday announced increased security measures in second city Benghazi and the arrest of two suspects in connection with the killing of a militia leader wanted by the International Criminal Court.

Security is precarious in Benghazi with frequent tit-for-tat violence and executions.

Mahmoud al-Werfalli, a member of forces loyal to eastern military strongman Khalifa Haftar, was shot dead Wednesday along with his cousin in the city, cradle of the country's 2011 revolution.

Oil-rich Libya descended into chaos after the NATO-backed uprising that ousted and killed veteran dictator Moamer Kadhafi, with rival militias and administrations vying for power.

The ICC issued a first warrant for Werfalli's arrest in August 2017, accusing him of having ordered or personally carried out seven separate rounds of executions of 33 people in 2016 and 2017.

In July 2018, the ICC issued a second arrest warrant for Werfalli for his "alleged responsibility for murder as a war crime".

The latter is the daughter of lawyer and rights activist Hanan al-Barassi, who was gunned down in November in Benghazi in broad daylight.

Military authorities in Benghazi said Abdaly was arrested while "threatening a fellow citizen with a handgun", according to a video footage of the alleged incident.

Possession of the handgun in itself is considered a crime, they said.

Meanwhile, the head of security in Benghazi, General Abdelbasit Bougheress, told reporters Saturday that on "instructions" from Haftar, all shops must install surveillance cameras before Tuesday.

Cars with tinted windows will be banned in the city, as well as vehicles without licence plates, he added, among other measures.

Earlier this month, the bodies of 11 people bearing gunshots wounds were found at the southern entrance of the city, a security source said, suggesting they had been "executed".

In October 2017, the bodies of 36 suspected jihadists, including 19 foreigners, were found in a vacant lot in the city bearing signs of torture.

A year earlier, the bodies of 10 young Libyans were found in a garbage dump in Benghazi.