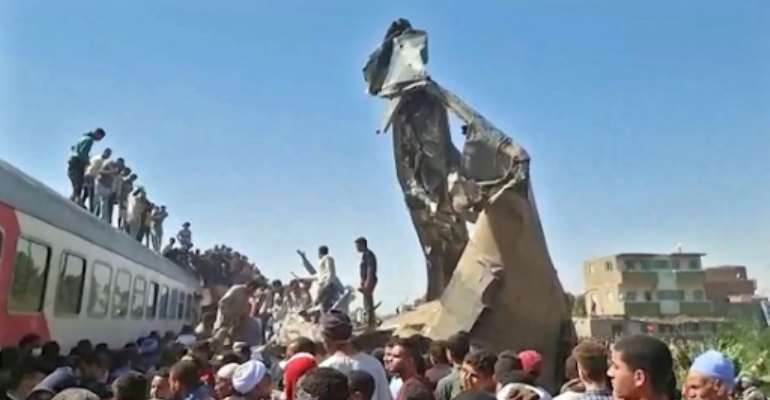 Twisted metal juts from the wreckage of a train collision that killed at least 32 people and injured more than 160 in southern Egypt. By - (AFP)

A collision between two trains killed at least 32 people and left more than 160 injured Friday in southern Egypt, a country plagued by fatal rail accidents widely blamed on crumbling infrastructure and poor maintenance.

President Abdel Fattah al-Sisi pledged tough punishment for those responsible for the crash, which came as his government wrestles with another major transport challenge: a giant container ship blocking the Suez Canal.

Medical reinforcements were routed from Cairo and more than a hundred ambulances were mobilized to transport the injured to hospital from the scene in the Tahta district of Sohag province, 460 kilometres (285 miles) south of the capital. 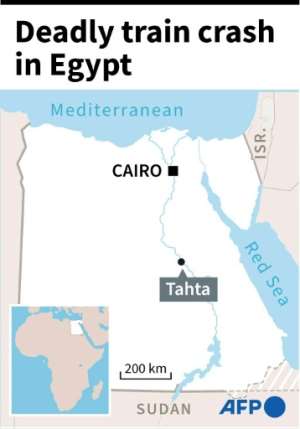 The health ministry gave an updated casualty toll of at least 32 dead and 165 people hospitalised with injuries, 70 percent of them fractures.

Dozens of technicians were working through Friday evening to remove five dislocated and damaged train wagons, an AFP correspondent on the scene said.

"We were at the mosque then a child came and told us (about the incident). We heard the collision, so we rushed and found the carnage," said one witness, speaking on condition of anonymity.

"The first ambulances arrived around half an hour after the explosion... there were children who removed (debris) using wooden ladders," the source, who spent the day helping the rescue workers, said.

Surveillance camera footage of the accident seen by AFP showed a carriage being violently thrown into the air in a cloud of dust when a speeding train rammed into another as it rolled slowly down the tracks. 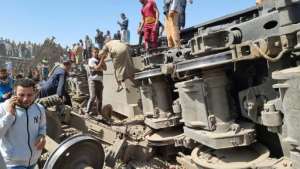 Rescuers gather around the overturned wreckage of two passenger trains that collided in the Tahta district of southern Egypt, killing at least 32 people. By - (AFP)

Twisted metal jutted from the wreckage as dozens of people gathered around the overturned carriages.

Harrowing images from inside one of the carriages posted on Facebook showed people screaming for help as they tried to free themselves from the wreckage.

"People are dying. Where are the authorities? Help us," one young man shouted repeatedly.

A video showed another man covered in dust trapped by twisted metal under what could have been the aisle of the carriage. 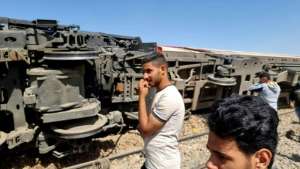 Egypt has been plagued by fatal rail accidents for years widely blamed on crumbling infrastructure and poor maintenance. By - (AFP)

"Our train suddenly stopped and a quarter of an hour later, the second arrived and struck us. I saw it coming, screamed, then found myself on the ground in great pain," Kamel Nagi, a 20-year-old conscript who suffered multiple broken bones, said.

As authorities launched an investigation, Egypt's rail authority blamed the crash on unidentified passengers who "activated emergency brakes in several carriages" on one of the trains.

A statement said one train hit the last carriage of the other, causing at least two carriages to overturn between the stations of Maragha and Tahta. 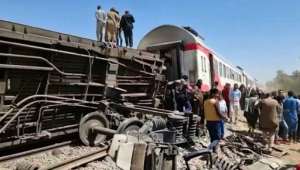 Axles, springs and twisted metal protrude from one of the railway carriages overturned in the collision in southern Egypt. By - (AFP)

Health Minister Hala Zayed travelled to Sohag to check on the injured, as President Sisi, who ordered the payment of compensation to victims and their families, vowed "deterrent punishment" for anyone found responsible.

Egypt has been plagued with deadly train accidents in recent years.

One of the deadliest was in 2002, when 373 people died as a fire ripped through a crowded train south of Cairo.

At the time, rail managers blamed the crash on signals malfunctioning in bad weather.

And in February 2019, a train derailed and caught fire at Cairo's main railway station, killing and injuring dozens and prompting transport minister Hisham Arafat to resign.

Since taking office in 2014, Sisi has appointed military officers to several high-ranking positions.

He has repeatedly praised the military's role in delivering major infrastructure projects in record time, such as the expansion of the Suez Canal in August 2015.

The strategic waterway has made headlines since Tuesday, when the container ship MV Ever Given got stuck across the canal, closing off the vital shipping lane.

The blockage has caused huge traffic jams at either end of the 193-kilometre (120-mile) long canal and major delays in the delivery of oil and other products.

An attempt to refloat the vessel failed on Friday, the ship's Singapore-based managers Bernhard Schulte Shipmanagement said, as companies were forced to re-route services from the Suez around the southern tip of Africa, a far longer route.

With Cairo facing crises on two fronts, an Iraq-Jordan-Egypt summit that was to take place in Baghdad over Friday and Saturday was called off.