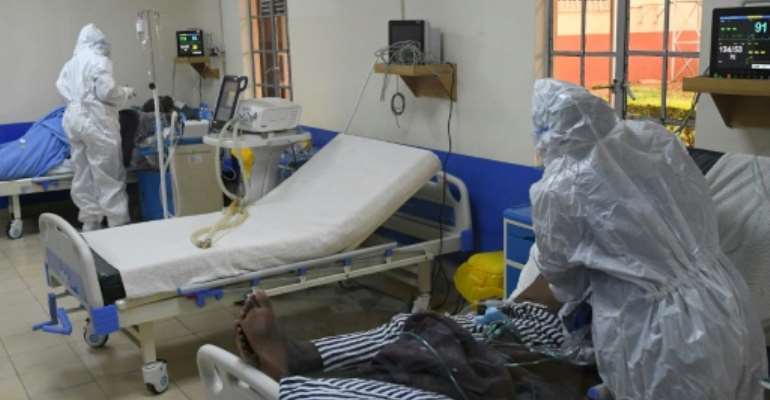 Kenyan hospitals are struggling to cope with a surge of Covid cases. By Simon MAINA (AFP/File)

Kenya on Friday placed Nairobi and nearby counties under partial lockdown and closed schools and bars in those areas as a deadly third wave of Covid-19 gripped the country.

In a national address, President Uhuru Kenyatta warned emergency measures were required to curb the highest rates of coronavirus infection seen in Kenya since the pandemic began a year ago.

Hospital admissions have surged 52 percent in the past two weeks while the rate of positive tests hovers around 20 percent -- a 10-fold increase since January, he said.

"The death rate is devastating by all measures, and the stress the pandemic is placing on our health system is unparallelled," Kenyatta said, adding this wave was not expected to peak for another 30 days.

The president declared that Nairobi and four other "disease-infected" counties responsible for the sharpest rise in cases would be placed under fresh restrictions effective midnight Friday to try to curb the spread.

"There shall be cessation of all movement by road, rail, or air into and out of the disease infected area as one zoned area" comprising Nairobi, Kajiado, Machakos, Nakuru and Kiambu, Kenyatta said.

All public gatherings in these hardest-hit counties -- including sports matches, church services and political meetings -- were banned until further notice.

An evening curfew, currently in place from 10pm, would be brought forward in these affected areas to 8pm, and last until 4am.

Classroom learning -- which only resumed in January after schools were closed for most of 2020 -- would be suspended again, except to those doing exams or for medical students.

Bars would be shut, and restaurants permitted to offer takeaway food only, and no alcoholic drinks, he said. Employees should work from home where possible.

International arrivals into Nairobi would still be permitted, as long as travellers possessed a negative Covid-19 test no more than 96 hours old.

Kenyatta conceded the measures would have "adverse effects" for East Africa's most dynamic economy and particularly its thriving capital of more than four million, which suffered under the brunt of past lockdowns.

But the measures were "temporary and necessary to contain the spread of the disease and therefore stop further loss of lives," he said.

"I am convinced that the cost of not acting now would be far greater," he said.

Schools in the Nairobi area are being closed again to fight the third coronavirus wave. By Simon MAINA (AFP/File)

Kenya experienced a first wave in the middle of 2020 and a second later in the year. The government responded quickly to the onset of the pandemic, and both waves were accompanied by restrictions of varying severity.

On March 19, Kenya recorded 28 deaths in a single day -- its highest daily toll since the pandemic began.

On Thursday, the Africa Centres for Disease Control, the public health agency of the African Union (AU), said East Africa was leading the continent in terms of new infections.

After addressing the nation, Kenyatta received his first Covid-19 vaccination shot on Friday before the cameras.

Kenya received its first AstraZeneca vaccines through the Covax initiative in early March. As of Wednesday, some 64,100 people had received a jab, according to the health ministry.