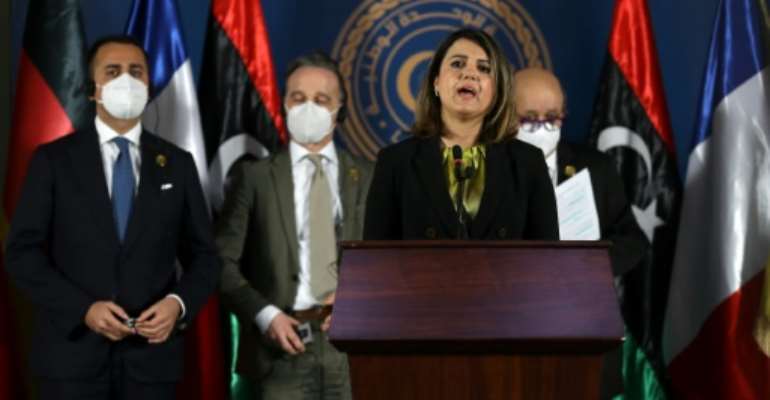 Libya's new unity government on Thursday demanded the "immediate" withdrawal of all foreign mercenaries ahead of year-end elections, in a call backed by the visiting top diplomats of France, Germany and Italy.

The North African country descended into chaos after dictator Moamer Kadhafi was toppled and killed in a 2011 NATO-backed uprising, resulting in multiple forces vying for power.

Fighting only came to a halt last summer, and a formal ceasefire in October was followed by the establishment of a unity government led by interim Prime Minister Abdul Hamid Dbeibah.

The conflict was stoked by outside powers, but the issue of foreign forces and mercenaries -- estimated by the UN to number 20,000 in December -- is seen as a threat to the UN-backed transition leading to December 24 elections.

"We reiterate the need for the departure of all mercenaries from Libya, and immediately," Libyan Foreign Minister Najla al-Mangoush said at a Tripoli news conference joined by her French, German and Italian counterparts.

French Foreign Minister Jean-Yves Le Drian echoed her call, saying their departure "is essential for the Libyan state to assert its sovereignty".

"We cannot look away from the consequences that the Libyan crisis may have in Europe in terms of security, terrorism and migration," he told the same news conference.

The three European diplomats were in Tripoli in a show of support for the newly formed Government of National Unity, or GNU.

"We represent the EU's support for Libya as it moves towards peace," said Italian Foreign Minister Luigi Di Maio.

"Italy and Europe are still convinced that there can be no military solution to the Libyan crisis," he said.

"We reiterated the importance of maintaining the ceasefire, the reopening of the coastal road and the departure of mercenaries."

UN Secretary-General Antonio Guterres had said in a report on Wednesday that he "remains deeply concerned" that "foreign elements" continue to operate in the country.

The document, obtained by AFP and discussed on Wednesday by UN Security Council members, notes some mercenaries have moved position, but considers the action insufficient.

A French diplomatic source said on Thursday that Syrian mercenaries deployed by Turkey were beginning to withdraw.

"This is one of the encouraging gestures that we have seen. There are movements (of the Syrian militia forces) that have been seen and noted," said the source, who asked not to be named.

"Our message is that this must continue, not only with the Syrian mercenaries but with all foreign forces," added the source.

As well as Syrians, previous UN reports have highlighted the presence in Libya of Russian, Chadian and Sudanese mercenaries, among others, as well as Turkish military units.

Dbeibah was sworn in as interim prime minister last week after his cabinet was approved in a move widely hailed as "historic".

The new transitional executive emerged from a complex UN-sponsored process launched in November, and its members were confirmed by Libya's parliament on March 10.

Libya had been divided between two rival administrations: the UN-recognised Government of National Accord (GNA) based in Tripoli, and its rival in the east loyal to military strongman Khalifa Haftar.

The eastern administration officially handed over power to the new executive on Tuesday, a week after Fayez al-Sarraj, the outgoing head of the GNA, formally ceded to the new unity government.

In spite of a long-running arms embargo, the GNA was backed by Qatar and Turkey while Haftar received support from Egypt, Russia and the United Arab Emirates.

Haftar has not officially taken part in the political negotiations.

The visit by the trio of EU foreign ministers comes after President Emmanuel Macron said France would reopen its embassy in the Libyan capital next week.

Their host Mangoush said on Thursday that Germany and Italy had also agreed to reopen their embassies in Libya, adding that the process "must be accelerated".

Other countries including Egypt and Malta have also announced their intention to reopen embassies in Tripoli.