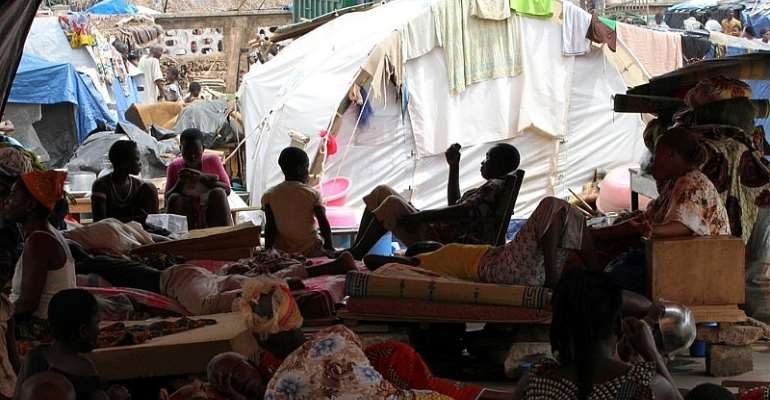 On 29 March 2011, a militia supporting the newly-elected Ivorian President Alassane Ouattara is alleged to have murdered more than 800 civilians in the western city of Duékoué, known to have been a stronghold of defeated president Laurent Gbagbo. The suspected mastermind of this attack is now on trial in Abidjan.

His name is Amadé Ouéréni, and he's described as a former bandit and smuggler. He is accused before the Abidjan Criminal Tribunal of having played an active role in planning the 2011 militia attack which cost the lives of 817 people, according to the International Red Cross.

Ouéréni faces twenty charges, including genocide, war crimes, rape, murder and extortion. He was arrested in 2013.

The accused denies any part in the organisation of the massacre, saying he was following the orders of a superior officer, a lieutenant Coulibaly.

On the day of the Duékoué attack, Ouéréni says he was in the distant village of Blodi, on a mission to collect a supply of weapons. He arrived back in Duékoué in the afternoon of the day after the killings.

On Wednesday, the opening day of the trial, it took the court clerk nearly two hours to read the description of the events of 29 March 2011.

Amadé Ouéréni is suspected of having taken active part in the savagery while leading a militia group.

Questioned by the tribunal president on Wednesday, Ouéréni denied having had any position of authority in the then rebel militia; he denies having been in Duékoué on the day in question.

He insists, however, that the militia action against armed groups supporting former president Laurent Gbagbo in the Carrefour district of Duékoué was fully justified.

"But how did 817 people lose their lives in a single day?" the president asked.

"That's war," Ouéréni replied, before going on to suggest that hunters of the Dozo ethnic group could have been responsible for the massacre.

Ten witnesses have made the trip from Duékoué to Abidjan to give evidence. The trial continues.

Collaborate with NIA to end compilation of new voters’ regis...
46 minutes ago