Epistle To The Minister Of Food And Agriculture 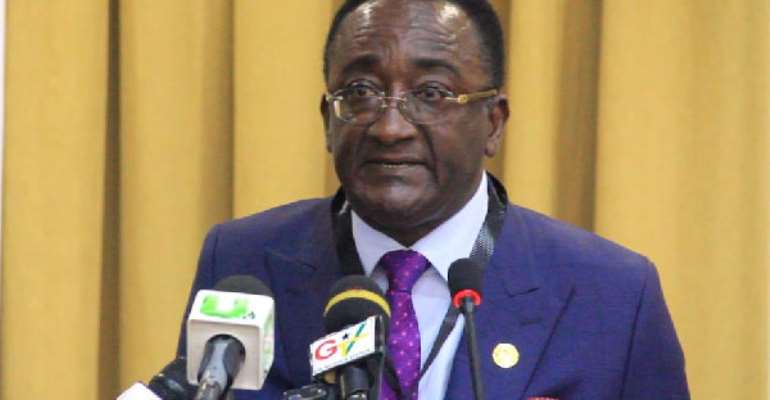 I have just finished consuming a bowl of fufu and some bush meat and I am so satisfied that I will vomit if I am forced to drink tea or any beverage for that matter. As I am writing to you this morning, my heart is full of joy because I have enough food in my kitchen for my wife and children and I am fine; very fine because a soldier marches on his belly and my belly is full so I can march like a soldier.

Dear Minister, do not worry when I address you as 'Honam Pe Adwuma' because you deserve to be called so. When I was in the Secondary School many years ago, we used to refer to our master who taught us Agriculture as 'Honam Pe Adwuma', to wit, 'the body that wants work'. We were particularly not happy anytime he decided to move us to the school garden for Agric Practical. The hoe, cutlass and other farm implements we used on the school garden were our enemies and the master was our arch enemy. That was the biggest mistake our generation did. In fact, if we had known what agriculture would do for us in our lives in future, we would have abandoned the other subjects and concentrated on Agriculture Studies.

Sir, at your age you have lived through the history of agriculture in this country and so in the normal circumstances, it is not for me to take you down memory lane. In my attempt to travel down that lane, I am doing so for the sake of the younger generation who were born too late to appreciate what went on in those happy and nostalgic years gone by. You remember those days of Dr. Kwame Nkrumah when agriculture was really the backbone of the economy. I know you lived through those years when the Farmers' Council, the brainchild of Osagyefo, which contributed a lot to the development of agriculture in this country. You also remember the Workers' Brigade which engaged in the mass cultivation of farm products which led to abundant food sufficiency in this country, and the days of “Work and Happiness”. I am sorry for tickling your busy mind.

Sir, I was not surprised that immediately you were appointed as the Minister of Food and Agriculture, you set out to travel the road the Osagyefo travelled on to make Ghana food sufficient. You have brought back the smiles that farmers of yesteryears had when things were rosy as far as agriculture is concerned. Workers who hitherto used greater percentage of their wages to buy food can now enjoy life as food is plenty and prices are relatively affordable.

I do understand why your detractors at the other side of the political divide are falling over each other, trying desperately to make Ghanaians believe that agriculture under you is a failure. What is consoling is that, greater numbers of the good people of this country appreciate your efforts and so if the few ones who wear wooden glasses refuse to see the good things that you have brought to farmers, they (your critics) rather have a problem hanging on their necks.

Dr. Kwame Nkrumah introduced the Agric Mechanisation Programme and imported thousands of Zetor farm tractors into the country from Russia to engage in the production of maize, groundnuts, rice and other food items. The programme worked to perfection and the issue of famine was something that we never dreamt of. In those days, the country was not importing rice into the system since we could produce enough local rice for home consumption. The other day, I was passing by the offices of the Ministry of Food and Agriculture in my district and I saw several brand new tractors with ploughs, harrows, planters and trailers packed there. Along the brand new tractors that I saw were old and unserviceable Zetor tractors which were used during the days of Dr. Kwame Nkrumah. I said to myself: “Wow! The good old days are back with a bang! It is very unfortunate that NPP communicators do not talk about all these things which are coming the way of farmers in the attempt by government to make sure the country produces more food for the people. These communicators still talk about Free SHS when in reality, Ghanaians, including the NDC propagandists, have come to accept the fact that the Free SHS is a lofty idea and has come to stay. The blind man will not see sugar if you show it to him, but he will feel the taste of sugar if you put it in his mouth. Today, the vile propagandists do not even talk of Double Tracking anymore because they can see school blocks sprouting up in their constituencies to solve the problem.

Dear Honam Pe Adwuma, your performance also reminds me of the late General Ignatius Kutu Acheampong, as far as the issue of agriculture is concerned. When General Acheampong took over power, he proclaimed to the world that Ghana was not going to pay any debt that we owed to other countries ('Yentua'). Sir, you remember in those days the national conversation was how we could survive as a nation if we refused to pay our debts so that wealthy nations could also give us more loans to develop the nation? General Acheampong had a trump card under his ambit and before we could say Jack Robinson, the good old General introduced the Operation Feed Yourself (OFY) programme which caught on so well with the people of Ghana that everybody was happy to get involved in farming. Your Planting for Food and Jobs programme is a replica of the Operation Feed Yourself programme and may God richly bless you for dreaming so big. This is the mark of a good minister.

But Sir, you have a problem at hand and if not solved now, your dream of feeding the nation and finding jobs for the youth will hit the rocks sooner than later. Some of your district and municipal Agric Directors are corrupt. The fertiliser subsidy you introduced has opened the floodgates for them to get rich quick. They collude with Agro chemical sellers to inflate the prices of the subsidised fertilisers and also sell a huge chunk to shylock businessmen who carry them to sell across our borders at cut-throat prices. They don't carry them through the approved borders, so things are done at the blind side of immigration officers. Don't sit in Accra and believe in reports sent by your district directors of agric. Some of them are simply saboteurs and ready to run the system down because of money. Shine your eyes, Honam Pe Adwuma.

Massive rot as 9 heads roll at Keta Municipal Assembly over ...
6 minutes ago