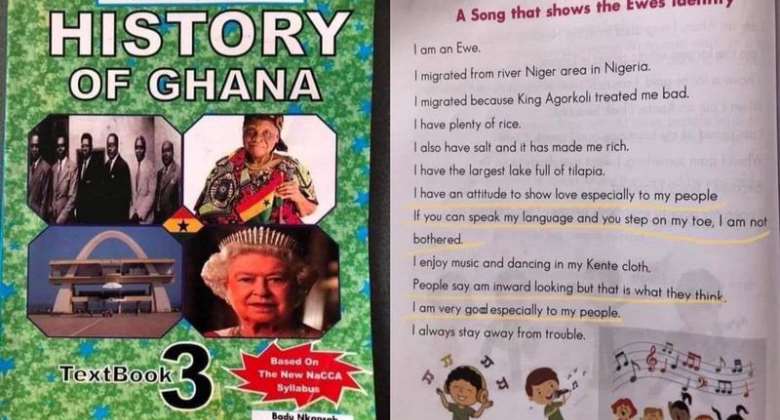 There was this young man claiming to be General Afrifa’s son who was making the argument that the Ewes should be proud to be described in a textbook as juju-loving. I think he misses the point. Nobody should be proud to be described as anything merely on account of their mother-tongue. There is nothing like a monolithic human entity definable on the basis of language. The sole basis for defining the individual is in his genetic code or environment. And if we understand that, we will not attempt to ascribe attributes or characteristic in generic term to any language group. Language is not the grounds for defining character.

For if we say that this ethnic or tribal group are like this or that, we are losing the argument; we are engaging in the fallacy of false generalization. Because no matter how you slice or dice it, no language group can have the same human attribution or characteristics. If you say that the Ewes love Juju, you are falsely implying that inherent in the nature of every identifiable Ewe language speaker is a genetic code that gives him or her the propensity to love juju. Or that juju-loving is inherently and separately a trait of every born Ewe. But if you examine the matter closely, every human characteristic that is present in any Ewe is also present in any other group or persons. No trait is uniquely Ewe. And so the conclusion we can draw is that the matter is a more environmental or sociological than a scientific one.

And even Afrifa Akoto, in his rather ignorant perorations, took patience to draw a clear distinction between the Ewe elite, who dislike the designation of being juju-loving; and the traditional Ewes who pride themselves in that designation. And does a person become less of an Ewe by becoming an Ewe elite? That fact alone should tell him that the matter of loving juju is more an artificial and sociological class distinction than a biological one.

We should all note that even those so-called tribal and tribalistic distinctions on which we have naively fixated our hatred and divisions have no cognizable nomenclature in biology. This is because our distinctions subsist on language alone. But as I keep on repeating, language is not a biological construct. It is a pure matter of artificial or social code made up by a primitive group to stay coherent and united. If in doubt, have a white child in Berlin and put him in Kumasi, and he will become an Asante, speaking the language better than anybody else. So we cannot define any biological trait by reference to a language. The simple reason why an Ewe is an Ewe is that he was born within a society and an environment where he has to speak the Ewe language. Arising out of that ability to understand other speakers, a cultural and sociological bond may arise amongst them. But it will not be the case that the members of the group were born with any special characteristics, but that because of their artificial language, the members get together to create their own cultures and traditions. Those cultures and traditions become an extension of the group language. Any time they leave their language setting and enter a new environment, they will leave behind everything and transform themselves into any group of choice if only for the purposes of their integration.

And that is why languages die. We call people by their language name, giving the impression that the people are inseparable from their language; but the truth is that more languages have died than those that are still alive. There is a fictional narrative that the Chinese spoke many different ethnic languages until an emperor forced them to speak in one tongue. Whether true or not, that narrative tells you that although language is an artificial construct, it is one sole source of division, suspicion and enmity and war. Conversely, there is more understanding and unity and love wherever people speak the same language.

The efforts of those textbook writers should therefore be to emphasize the advantages of describing ourselves as one Ghanaian nation, undivided by tongue. This is because if the standard of any description is based on the multiplicity of languages inhabiting the land, we will succeed in a distractive hatred and arguments no matter how we make the descriptions of one group. And if we cannot define any group in a true and uniform manner, that fact alone should prompt us to understand that we are not using a scientific method in our designations and characterizations.

The African problem, as wrongly described by many scholars, may well have nothing to do with our intellectual competence as a biological species. It has to do with our panoply of languages around which many have formed their culture and identity and imagine that they are different or superior to others. If you compare all these other continents with ours, you will realize that we have more conflicts on our continent than any other. Even in these other continents, where conflicts exist, it is more a matter of language differences. Where many languages exist, many conflicts exist. And to describe the character of a person according to the language he speaks is stupidity and sheer ignorance masquerading as brainwave.

So these textbooks should not be about what the Ewes or Asantes or the Dagombas do. That will be a false standard to measure members of these groups who are per se individuals with different human characteristic. Rather, the textbooks can push for a Ghanaian personality to which each of us can aspire: People of peace, hospitality, hard work, discipline and humility. All these would not emanate from the character of the Ghanaian in any biological or natural sense. Rather they will become the ethos which we have purposely created and to which all citizens will aspire.

Otherwise any textbook engagement as to what these language groups connote will be a false profile in prejudice ……..a mere distraction and lies to which we shall be going in circles forever, foraging in victimhood. This country deserves better than prejudice infested and arrantly divisive textbooks.