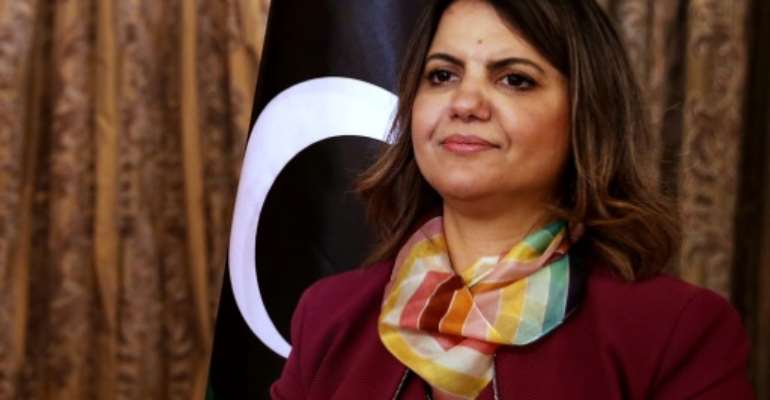 Libya's new government includes five women, with two in key portfolios -- a first for the country nonetheless criticised by activists as insufficient and as not living up to a UN commitment.

Libya descended into conflict after dictator Moamer Kadhafi was toppled and killed in a NATO-backed uprising in 2011, with an array of forces battling to fill the void.

The transitional Government of National Unity (GNU), which took office this week, faces daunting challenges, including unifying the country's institutions, ending a decade of fighting marked by international interference and preparing for December elections.

The cabinet is comprised of 26 ministers and six ministers of state, with women assigned to five posts, including the key foreign affairs and justice portfolios.

The US ambassador to Libya, Richard Norland, has called it a "historic time for Libyan women", while UN Women hailed the appointments as "a major step for advancing women's rights".

Some Libyans on social media have welcomed the announcements as "a big step", a "leap for society" and a "promising start".

But activists are less enthusiastic, arguing that the new executive had the opportunity to do more.

In a statement to the UN Human Rights Council this week, Britain urged the GNU to "work towards the full, equal and meaningful participation of women, including in conflict resolution and decision-making".

"Women remain under-represented in all governance institutions and processes in Libya," it warned.

The five women in cabinet hail from across the country.

Activist and lawyer Najla al-Mangoush, from the main eastern city of Benghazi, is the country's first female foreign minister.

Mangoush rose to prominence in 2011 as part of the National Transitional Council, the political arm of the rebellion that brought an end to Kadhafi's 42-year rule.

She will be working alongside jurist Halima Ibrahim Abderrahmane, from the western town of Gharyan, who takes the justice portfolio, and Mabrouka Touki, an academic from the southern Fezzan region, who has a degree in nuclear physics and will head the culture ministry.

Wafaa al-Kilani is in charge of social affairs and Houria al-Tormal the women's ministry.

Interim Prime Minister Abdul Hamid Dbeibah, sworn in on Monday, was selected last month alongside a three-member presidency council as part of a UN-sponsored process launched in November.

Activists point to his pledge when a candidate in the UN process to allocate 30 percent of ministerial positions to women.

Under the current line-up, women account for just half that amount.

"We are proud to see Libyan women named to key posts, but also unhappy that the prime minister failed to keep his commitment," said Ghalia Sassi, president of the women's association Maaha (With Her).

She vowed activists would keep up pressure on the government to adjust its course, but said there was "a long road ahead".

Activist Laila Ben Khalifa, who began the push for the 30 percent quota, echoed her disappointment over the shortfall.

She alleged that ministries had been distributed according to "region rather than competence".

Although Libyan women played a key role during the 2011 uprising, they have had a limited presence in previous transitional bodies and in the current parliament.

The GNU's predecessor, the Government of National Accord, headquartered in western Libya and established in 2016, had just two women from some 30 portfolios.

A parallel eastern administration, not recognised by the international community, had just one.

And while a decade of insecurity and conflict has had a profound impact on daily life in Libya, a worrying development has been violence against rights activists, including women.

Human Rights Watch urged authorities to investigate the "apparent politically motivated killing", while the UN mission to Libya said Barassi's death showed "the threats faced by Libyan women as they dare to speak out".

Her killing came after the disappearance of lawmaker Siham Sergewa, who was taken from her home in Benghazi in July 2019.

Her abduction came shortly after the airing of a television broadcast in which she criticised eastern strongman Khalifa Haftar's offensive on Tripoli, launched months earlier.

At the UN Rights Council this week, Britain also expressed concern over violence against women in Libya.

"Libyan authorities must address the silencing of women journalists and activists, and tackle sexual and gender-based violence," it said.