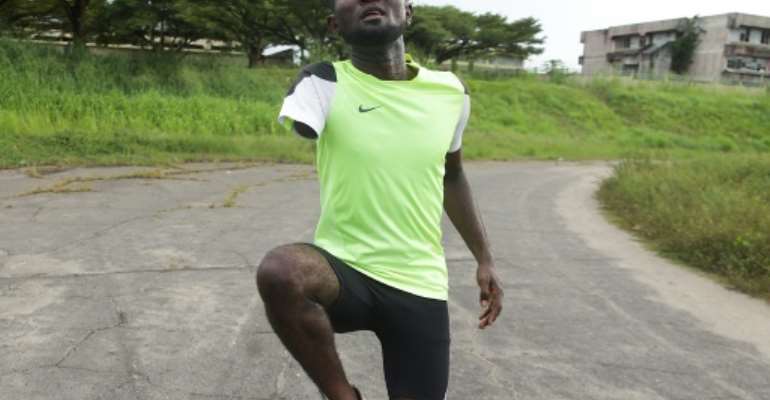 With a personal record of 100 metres in 11.76 seconds, Gabon's Davy Moukagni has every reason to dream of mounting the podium at the Paralympic Games in Tokyo in August.

But lacking funding from the government and sponsors, the 28-year-old sprinter has to train on a neglected, grassy high-school track riddled with sharp stones.

The lane lines on the track have been all but erased by the passage of time and other feet.

But these are problems that the young athlete and his two team mates are sadly used to.

"The first time I used starting blocks was in an official competition," Moukagni says. "I was all disoriented."

At the Owendo stadium, some 10 kilometres (six miles) from the capital Libreville, the runner takes off like a bullet, throwing everything he has into training for the 100 and 200m under the watchful eye of his coach.

"I make do with what I have. We have no equipment -- I'm getting by like a real Gabonese," Moukagni quips, cracking a smile.

The management student receives no sponsorships or stipends. "Everything I'm wearing I paid for myself," he says.

The paralympic team representing the oil-rich central African nation of two million people competed in the Games for the first time in 2008 in Beijing and also went to London, and Rio but have never brought home a medal.

Until 2014 the federation had an annual budget of 50 million CFA francs -- about $100,000 or 75,000 euros. But the state, though rich with oil money despite falling demand, has since stopped its support.

"Our coaches are volunteers because we have no money to pay them," admits Mba. "Most of them are sports teachers the rest of the time."

Coach Landry Lignabou watches his protÃ©gÃ© take off for a 100-metre dash.

"Push, push, push!" he cries as Moukagni reaches peak speed, telling him afterwards, "You got up too fast."

Moukagni has notched up 11.76 seconds for the 100m -- a mark that statistically puts him among the medal winners in Tokyo. By Steeve JORDAN (AFP)

Lignabou has been a coach for the federation since 2003 and deplores the lack of means that he says minimises his athletes' chances at medalling.

Veteran para-cyclist Edmond Ngombi, whose lower limbs are weakened by polio, reached the para-cycling semi-finals in Rio in 2016 despite a frustrating technical problem.

"My equipment was defective -- a problem with the handlebars," Ngombi, 44, who struggles around on crutches, recalls sadly.

He has been using the same competition machine for a decade -- a gift from the Sylvia Bongo Ondimba foundation, named after Gabon's first lady -- and feels at a disadvantage.

"Paralympic sports are not sufficiently developed in our country," Sports Minister Franck Nguema acknowledged in an interview with AFP.

"For the time being, the few athletes and their federation trying to keep that flame burning are having a hard time getting wide-embracing support from the state."

It was only at the last minute that Gabon released funds to allow the three athletes to travel to Tunis to compete in Olympic qualifiers currently underway.

Fitting in training with day jobs and studies is an added challenge.

"I have classes during the day and it takes a long time to go get to the stadium in a taxi, especially with traffic jams," says Moukagni.

But it is the poor equipment at the Owendo stadium that is the real source of shame for the federation -- so much so that some at FEGOPH wanted AFP journalists to meet their athletes at a different facility never used by the team.

On a small mound near the track, Audray Fabiola Mengue Pambo warms up for the shot put and javelin.

Other para-athletes competing in shot put might have a custom chair secured with straps and braces -- Mengue Pambo must get by with a wooden stool.

"This isn't the right equipment but we don't have specialised material," whispers the 31-year-old.

"The government would have to give greater priority to sport for handicapped people for us to get better results for our country," she says.