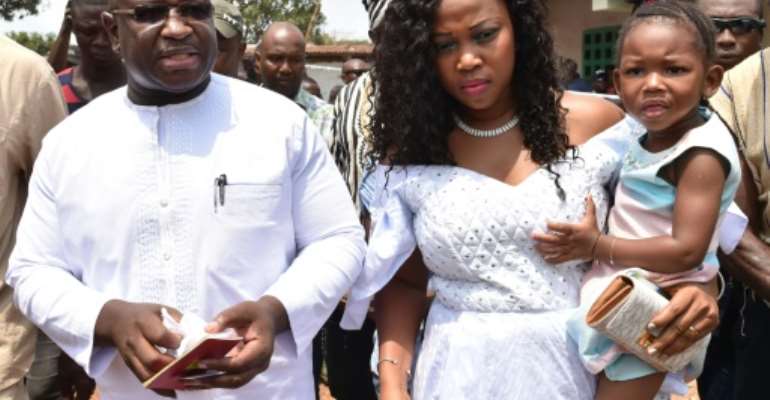 Julius Maada Bio and his wife Fatima leave a polling station after voting in the 2018 elections. By ISSOUF SANOGO (AFP)

After casting itself as a fighter against corruption, Sierra Leone's government is under fire over allegations of irregular spending by its first lady and a senior minister.

The scandal has come as an embarrassment to the West African state's president, Julius Maada Bio, who after coming to power in 2018 launched a graft probe into his predecessor.

Scrutiny of his inner circle began in January, after an African news website reported that the president's wife, Fatima Bio, had spent the equivalent of about $3 million (2.5 million euros) in government funds as part of an anti-rape campaign.

Sierra Leone forbids the office of the first lady from using taxpayers' money, according to Marcella Samba Sesay, the director of the Campaign for Good Governance, an NGO.

Africanist Press, the news website, then reported in February that Chief Minister David John Francis had claimed the equivalent of some $1 million dollars (830,000 euros) in "irregular" expenses.

Sierra Leone boasts huge mineral and diamond deposits, but it remains one of the world's poorest nations and is still recovering from decades of war and disease.

President Bio, 56, was elected after a tumultuous campaign on promises to tackle corruption and eliminate wasteful government spending.

In 2019, he launched an investigation into his predecessor, Ernest Bai Koroma, who governed from 2007 to 2018.

Last November, the authorities banned Koroma, 67, from leaving the country after officials found that funds worth tens of millions of dollars from his time in office were missing.

Bio also suspended his own labour minister last year in a corruption case involving rice donations from China, and vowed to restore "probity in governance" in the country.

But in a reversal for the president, Sierra Leone's anti-corruption agency announced in February that it would investigate the office of the first lady.

The agency is set to examine the expenditures of both Fatima Bio and the former first lady as part of the probe.

The first lady has admitted that she received government funds, but denies that money was misspent.

"I'm not a thief," she said. "I'm not getting a fraction of what other African first ladies are receiving in the region."

Sierra Leone's government did not respond to requests for comment from AFP.

"Corruption has persisted, even flourished under this government," said Kandeh Kolleh Yumkella, the leader of an opposition party, who is demanding a parliamentary investigation.

Lamin Bangura, a university student in the capital Freetown, said he pays bribes to ensure access to basic amenities such as water or electricity.

"Our president promised to tighten the leakages," he said.

"Instead he opened the corruption floodgates for his family and friends".

Any reasonable government will prioritize the abandoned proj...
23 minutes ago