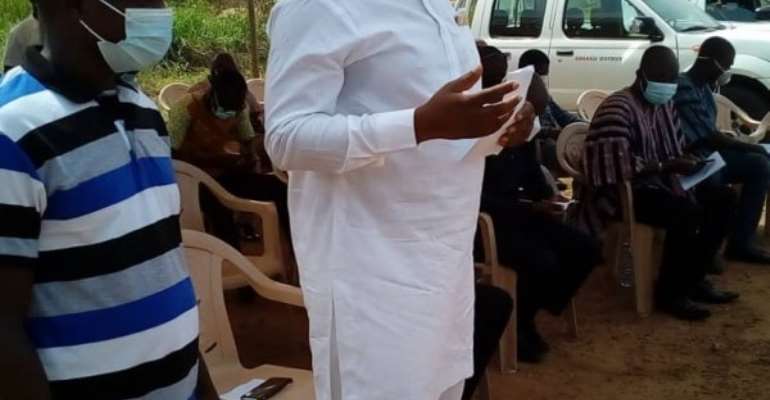 Governs Kwame Agbodzah, Member of Parliament (MP) of Adaklu, says he has decided to be a voluntary COVID-19 ambassador in the Adaklu district after he missed death from the virus.

He said he was ready to share his experience, create awareness and educate the people about the virus and the need to observe the safety protocols.

Mr Agbodzah made this known at the commissioning of a Health Centre he funded with his share of the National Health Insurance Levy and the MP Common Fund at Adaklu Wumenu in the Adaklu District.

The Health Centre has an initial contract sum of 266,850 Ghana Cedis, but the cost allegedly doubled due to delays in completion.

The Centre has a laboratory, dispensary, out-patients department, consulting rooms, antenatal clinic, delivery ward and washrooms, among others.

Mr Agbodzah, sharing his experience with the people, said he tested positive and was hospitalised for some days.

"What I went through was terrifying and it was by divine intervention that I survived," he told the people.

The MP said the ravages of COVID-19 were harrowing and appealed to those who doubted its existence to "wake up from their slumber."

He appealed to the people to always observe the COVID-19 safety protocols to avoid contracting the virus.

"Please let us not deceive ourselves that akpeteshie (local gin) or warm water are antidotes to the virus because it is not scientifically proven," he said.

Mr Agbodzah warned religious leaders and others who were using the pulpit to create fear in the people that the COVID-19 vaccine was the mark of the beast or was meant to wipe the black race from the earth to desist from the act.

He said the vaccine was just like any other one such as the small or chicken-pox vaccines that would strengthen the immune system to fight the virus.

He appealed to the residents to go in for the vaccine when the district had its allocation.

Mr Agbodzah was full of praise for the health workers at the Ga West Municipal Hospital, saying "though my recovery was by divine intervention, the staff of the hospital played a yeoman's role."

Mr Charles Azagba, Adaklu District Director of Health Services, said 10 people tested positive for the virus in the district but it currently has only one active case.