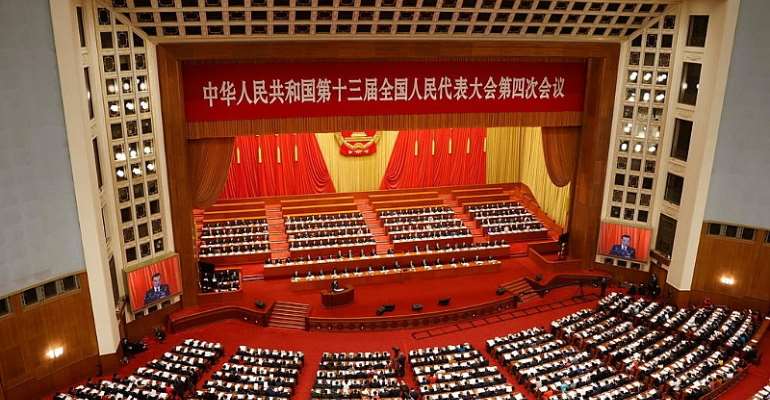 In its yearly parliamentary session, China has announced massive economic growth, strict rules on Hong Kong and an increase in military spending. Beijing wants to show the world it is in charge, in spite of the ravages of the Covid-19 pandemic.

In the 2019 Chinese blockbuster movie The Wandering Earth, our planet is threatened by an expanding sun. In order to save mankind, China, leading a world government, builds gigantic booster motors and transforms the earth into one big space ship, thus avoiding disaster.

When Chinese Prime Minister Li Keqiang read his report at the yearly session of the National People's Congress (NPC,) he may have had the spirit of that movie in mind.

The ruling Communist Party aims for growth of “over 6 percent” as the world's second-largest economy rebounds from the coronavirus epidemic, Li Keqiang told the NPC.

China, which registered the first outbreak of the Covid-19 virus in December 2019, then took rigorous steps to lock down the country, producing preventive equipment and vaccines, supplying them to countries which are still suffering from the pandemic. Now the Asian powerhouse boasts a level of economic growth that most countries hit by the virus can only dream of.

About 3,000 delegates gathered for the annual meeting, the year's highest-profile political event, under intense security and anti-virus controls. It has been shortened from two weeks to one because of the pandemic.

The party is shifting back to its longer-term goal of becoming a global competitor in telecoms, electric cars and other profitable technology. That is aggravating trade tension with leaders in Washington and Europe, who complain that Beijing's tactics violate its market-opening commitments and hurt foreign competitors.

China has tried to silence critics with claims that the country was instrumental in providing developing nations with tools to fight the Covid-19 pandemic. On top of that, Li promised progress in reining in climate-changing carbon emissions, a step toward keeping President Xi Jinping's pledge last year to see China become carbon-neutral by 2060. But he avoided aggressive targets that might weigh on economic growth.

The NPC meeting focuses on domestic issues but is overshadowed by geopolitics as Xi's government pursues more assertive trade and strategic policies and faces criticism over its treatment of Hong Kong and ethnic minorities. The ruling party has doubled down on crushing dissent as Xi tries to cement his image as a history-making leader reclaiming China's rightful place as a global power.

An NPC deputy chairman, Wang Chen, said a Hong Kong Election Committee dominated by business people and other pro-Beijing figures will be given a bigger role in choosing the territory's legislature. Wang said the Election Committee would choose a “relatively large” share of the now 70-member Legislative Council.

Army gets a major spending boost

Meanwhile, observers in the US, currently China's main 'strategic competitor', will worry about the expansion of the Chinese military.

"China will step up efforts to enhance the strategic capacity of its armed forces to protect the sovereignty, security, and development interests of the country," said Premier Li Keqiang.

"We will boost military training and war preparedness across the board, make overall plans for responding to security risks in all areas and for all situations, and enhance the military's strategic capacity to protect the sovereignty, security, and development interests of our country," he said.

But Beijing is generally worried about an increasing tendency of western and other nations to group together in what Beijing may see as an encirclement. There is the "Quad" initiative, a strategic alliance between the US, India, Australia and Japan, increasing attempts by Washington to use Vietnam and other ASEAN member nations as a buffer against China, and growing participation in military exercises in the East-Pacific, like upcoming navy exercises involving the US, Japan and France.