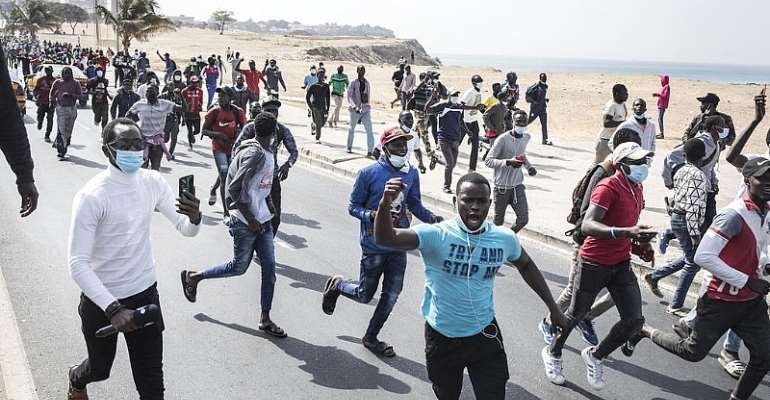 Senegalese opposition leader Ousmane Sonko is to appear in court on Monday to answer charges of rape, which his supporters say are politically motivated. His arrest on Wednesday sparked days of widespread street protests and clashes with security forces in Dakar.

Sonko, a figure popular among Senegalese youth, left the courthouse on Friday after a senior judge notified him of rape charges, plus making death threats, and summoned him to appear before the court on Monday, according to reporting from RFI's Charlotte Idrac.

A lawyer acting for Sonko, Abdoulaye Tall, told RFI that he was transferred very early in the morning, and his client did not have legal representative during his audience with the judges.

The Senegalese authorities also announced restrictions on traffic in Dakar, with mopeds and motorcycles banned from the streets, a move most likely designed to curb the mobility of young protesters.

Violence was sparked following the arrest of the 46-year-old on Wednesday. He is accused of raping an employee at a beauty salon last month, allegations he denies. His supporters see the charges as politically motivated.

Young people came out onto the streets in support of Sonko and violent clashes erupted with the security forces in the capital Dakar, as well as the south of the country.

Scuffles with opposition supporters broke out at the Cheikh Anta Diop University in Dakar on Thursday, with security forces using tear-gas and firing blanks, while youths responded by throwing stones.

UN weighs in
Mohamed Ibn Chambas, UN representative for West Africa, called on all actors to show calm and restraint. He urged the authorities to take all possible measures to appease the situation, and ensure the constitutional right to protest.

Sonko has emerged as a vicious critic of President Macky Sall, since he came to power in 2012, and his supporters believe Sall is plotting to cripple the opposition leader before the country's next elections in 2024.

Roads in the Dakar were blocked on Thursday and violence also hit suburbs of Les Parcelles Assainies, Pikine and Guédiawaye. Cars were set ablaze and shops vandalised with violence continuing late into Thursday night.

It appeared as if some of the demonstrators targeted French interests in the former colony, hitting Auchan supermarkets and Total petrol stations. Media outlets Rfm and state-backed newspaper Le Soleil were also in the cross hairs of protests.

In the Casamance area, in the south of the country, at least one person was killed, as demonstrations erupted in the town of Bignona, where Sonko is from.

The government criticised “regrettable acts of violence and vandalism” in a statement, especially given the “current catastrophic health crisis”.

Clampdown on opposition
Senegal's opposition has denounced a “sordid political plot” to muzzle Sonko, as a new opposition coalition baptized the “Movement for the Defense of Democracy” urged continued action on the West African nation's streets on Friday.

Several businesses operating in the country have already signalled that they will remain closed given the tense environment, and extent of damage during Thursday's demonstrations.

President Macky Sall's government responded to the swell of support for Sonko by clamping down on the internet.

Two private television stations senTV and Walfadjiri were taken off the airwaves following protests. The country's audiovisual authorities put other media houses on guard, warning about calls for a popular uprising or urging insurrection during broadcasts.

“The regime is determined to see it through, with increased repression,” Gassama told journalist Jeanne Richard.

“And on the other side, we have young people across the country determined to do battle with a power they consider repressive,” he added.

The growing protests stand in contrast to the country's stability over many years.

During election campaigning he vowed to break Senegal's association with the Paris-based West African CFA franc. He has garnered a dedicated and energised social media following, with some of his supporters claiming him as some kind of Thomas Sankara figure.