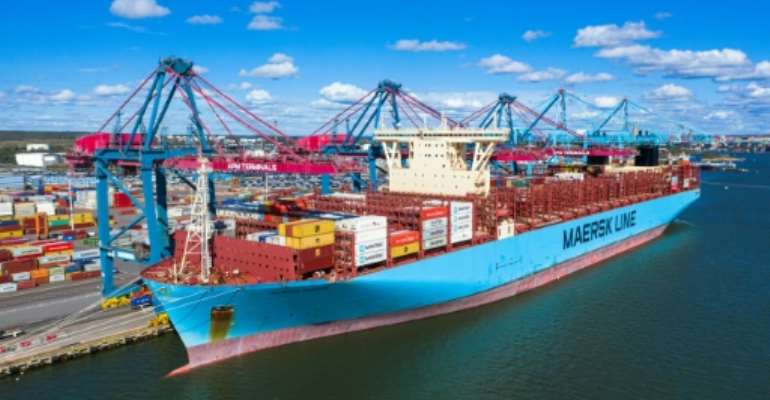 The call for action comes after two of the Danish company's ships were boarded by pirates in the Gulf of Guinea within the space of one month at the turn of the year.. By Jonathan NACKSTRAND (AFP/File)

Fed up with pirate attacks on its fleet off the west African coast, global shipping giant Maersk is clamouring for a major naval mission to police the vital but treacherous maritime route.

The call for action comes after two of the Danish company's ships were boarded by bandits in the Gulf of Guinea within the space of one month at the turn of the year.

The area is a major shipping route stretching from Senegal to Angola, but it has been plagued by piracy in recent years.

Armed kidnappings of seafarers reached record levels in 2020, according to the International Maritime Bureau (IMB).

"In 2021 we should not have seafarers who are afraid of sailing anywhere because of piracy, this is not the age of piracy," Aslak Ross, head of maritime standards at the Danish giant, told AFP.

Maersk wants an international mission similar to the naval operation that the European Union has deployed in the Gulf of Aden, off East Africa, since 2008 and which has been credited with a sharp drop in piracy there.

"A solution is to have the international community support a mission in the short term," Ross said.

At the same time, governments should back longer-term efforts to strengthen the anti-piracy capabilities of coastal countries, he said. Every day some 1,500 ships travel the maritime route off Africa's two largest oil producers, Nigeria and Angola, and Maersk said 50 of its vessels regularly sail in the area.

Maersk is the world's largest container shipping company, operating in 130 countries and employing some 80,000 people worldwide. It moves 12 million containers every year.

The waters are the world's number one spot for cargo-ship crew kidnappings, which tend to be seen as more lucrative for pirates than the traditional attacks on oil tankers.

Of the 135 attacks on seafarers recorded worldwide last year, 130 took place in the Gulf of Guinea, the IMB reported.

'Who better than the French?'

Denmark, a Nordic nation of just 5.8 million people, boasts the world's fifth-largest merchant navy and has backed Maersk's attempts to spur the EU into action.

Maersk is particularly keen on securing French involvement in anti-piracy efforts, given the country's experience with military deployments in West Africa.

"Who better than the French?" Ross said, highlighting the EU state's "historical interests" and "regular presence" in the region.

A French government source told AFP that Paris does not currently envisage a European maritime operation along the lines of operation Atalanta in East Africa, pointing instead to the existence of a "coordinated maritime presence" (CMP) in the area. 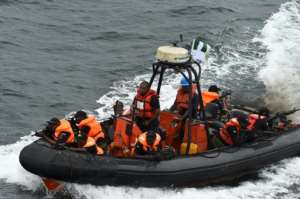 Maersk wants an international mission similar to the naval operation that the European Union has deployed in the Gulf of Aden, off East Africa, since 2008 and which has been credited with a sharp drop in piracy there.. By PIUS UTOMI EKPEI (AFP/File)

"The Danes are welcome to join the CMP and make a contribution," the source said.

Launched this January, the EU-led CMP involves France, Spain, Italy and Portugal, and provides resources to military ships already in the gulf, in return for information and intelligence sharing.

'Lack of political will'

But with no mandate for the CMP vessels to intervene in an attack, researcher Jessica Larsen of the Danish Institute of International Relations believes the EU initiative falls short of Denmark's hoped-for intervention.

"There seems to be a lack of political will to launch a military operation from the European side," she told AFP.

States in the region are equally concerned about maintaining sovereignty, making them reluctant to host a European operation, she added.

"Nigeria is unlikely to welcome an international naval coalition as this will serve to highlight the inadequacy of Nigerian counter piracy efforts," Munro Anderson, of maritime security firm Dryad Global, told AFP.