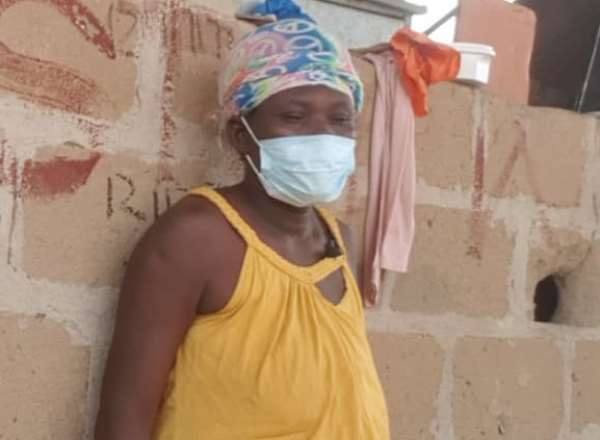 A visually impaired woman, Aunty Faustina, in Accra whose husband is in prison is in desperate need of help.

The mother of eight children was ejected from her rented apartment for failing to pay her rent and now lives in an isolated uncompleted house at Ashognman Estate, Accra, without electricity and toilet facilities.

Her husband, who is currently serving jail time, was arrested last year for defiling their daughter.

Aunty Faustina was not born blind but was diagnosed with glaucoma two years ago which has made her blind.

In an encounter with a Human Rights advocate, Lawyer Mary Ohenewaa Affulshe, she said she could not afford formal education for her eight children.

She sadly narrated that her husband, before his arrest, refused to provide food, school fees and other basic needs for the family.

“Since I became blind, I had to stop selling and my husband who worked didn't care anymore. He told me he didn't have money to pay for the children's school fees. He also said his parents didn't educate him,” Aunty Faustina narrated.

“I suspected he was sleeping with our daughter but he rather accused the girl of sleeping around with boys in the area,” she stated.

She explained that “He doesn't take care of me and he sleeps with me and our daughter…My daughter confirmed to the nurse that it's her father who slept with her. He slept with her three times. He denied it after his arrest but he's in police custody at Aburi.”

She said, “The eldest is 19 years and the youngest, eight months old. Three of them are living with someone and they are in school. But the rest are with me and I cannot send them to school because of my condition and financial difficulties.”

Lawyer Afful is therefore appealing to the public, NGOs and philanthropists to come to the aid of the destitute family.