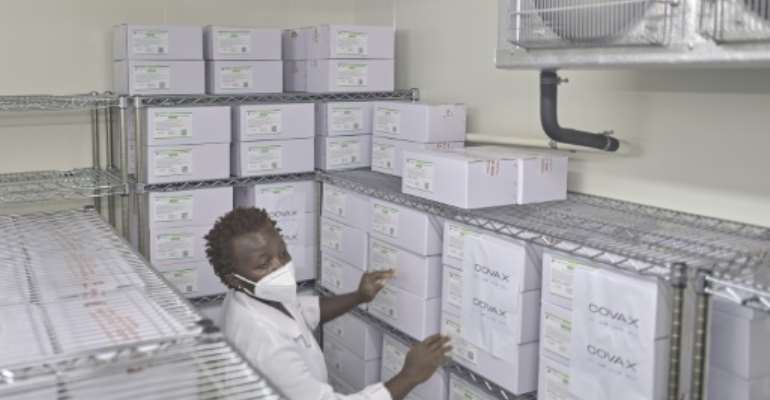 Chill factor: Kenya's first batch of Covid vaccines is being kept in a special cold store in Nairobi. By TONY KARUMBA (AFP)

Kenya on Friday began vaccinating high-priority healthcare workers against coronavirus, as initial consignments of the long-awaited drugs began to be rolled out in East Africa.

In Kenya the director general of the health ministry Patrick Amoth was the first to receive the jab, after the drugs arrived in the country on Wednesday.

"I feel great that I have taken the Covid vaccine and I urge other health workers not to fear. The vaccine is safe," he said.

Rwanda also began its vaccination campaign in earnest after an initial 1,000 doses of the Moderna vaccine were rolled out to select health workers in February.

Kenya has received just over one million doses of AstraZeneca vaccine, which was manufactured by the Serum Institute of India, under the UN-led Covax initiative which is assisting poorer countries to receive the medicine.

"This is an exciting moment for our nation. We have been fighting the pandemic with rubber bullets. But what we have acquired today is equivalent, metaphorically speaking, to bazookas and machine guns in the fight against the pandemic," Health Minister Mutahi Kagwe said upon the arrival of the vaccines.

Kenya will first vaccinate some 400,000 health workers before moving to other priority workers like police and teachers in a first phase estimated to last until June.

From July to June 2022 the country will focus on those at high risk of death or disease, and then a final phase running until July 2023 will target the rest of the country.

Also under Covax, Rwanda became the first African country to receive the Pfizer-BioNTech coronavirus vaccine on Wednesday, with around 100,000 doses delivered, and has also received 240,000 doses of the AstraZeneca jab.

Rwanda, a country of 12 million, plans to inoculate 30 percent of its population this year, and 60 percent by the end of 2022.

Uganda meanwhile is expecting its first shipment of vaccines to arrive Friday and will start giving out the drugs on March 10.

The East African nations were among the first on the continent to implement strict lockdowns in a bid to hold back the pandemic in March 2020. All three countries still maintain an evening curfew.