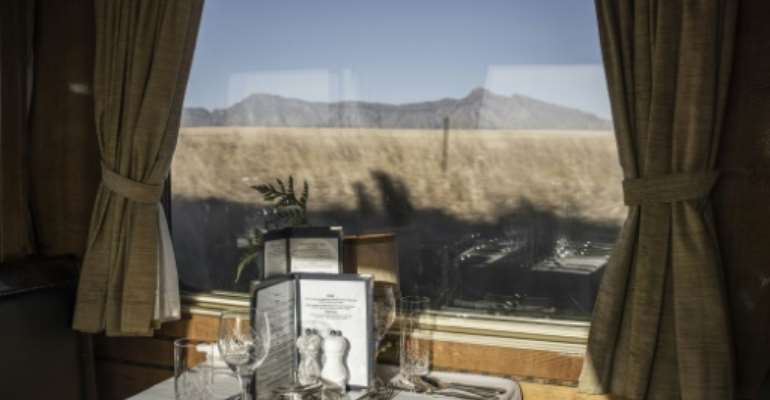 The Blue Train crosses South Africa for more than 1,600 km from Cape Town, its southern tip, to its capital Pretoria. By MARCO LONGARI (AFP)

Timeless ease fills the room as passengers wait to embark on the fabled Blue Train for a luxurious two-night trek across South Africa.

But even in this cosseted world, 2021 intrudes, showing that nothing can escape the grip of the coronavirus pandemic.

Passengers are discreetly ushered off in small groups to a fast-track coronavirus testing centre nearby.

A negative result, sent by text, is followed by an elegant appetiser lunch -- the final step before "All aboard!" signals the start of the adventure.

In the background stands the dashing Blue Train, ready to accommodate excited passengers in 19 plush wagons lined with wooden panels and polished brass. 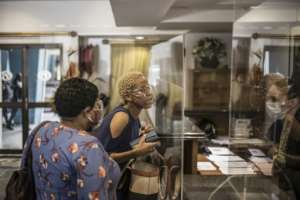 With prices lower as international travellers stay away, South Africans who would not have been able to afford the trip are trying out the Blue Train. By MARCO LONGARI (AFP)

Forty-eight hours of pampering begins as the train rolls out of the station on a 1,600-kilometre (994-mile) trip through the Karoo desert, slicing up the middle of the country to the capital Pretoria.

The Blue Train is a perfect escape from the cares of the world.

Ironically, most South Africans could never have dreamed of affording its luxury before Covid appeared.

But coronavirus travel restrictions have stemmed the flow of wealthy international tourists that long dominated the train's clientele, mainly from Australia, Britain and Japan.

Service resumed in November with heavily discounted prices. Today nearly all its passengers are from South Africa.

"I grew up knowing there was a Blue Train, it was unaffordable," said Cape Town-based doctor Mashiko Setshedi, accompanied by her 67-year-old mother. "Thanks to Covid it became possible." 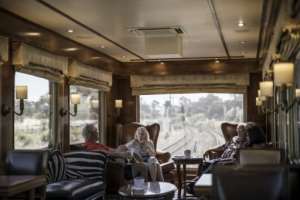 The massive windows of the observation car offer views of the landscapes and cityscapes along the Blue Train's route. By MARCO LONGARI (AFP)

Unlike Setshedi, most of the passengers were white couples in their 50s and 60s.

"Our trip to the US was cancelled in 2020," said Bennie Christoff, a 54-year-old financial advisor, flanked by his wife.

"We are locked in and the Blue Train is one of the things I wanted to do. My grandparents told us about it."

The decades-old train is run by South African state logistics firm Transnet, which has struggled to keep rail traffic smooth since the economic setbacks of the pandemic fuelled a surge in cable theft.

A discounted ticket still comes at a steep minimum price of 23,000 rand ($1,544) -- about four times the average monthly minimum wage in one of the world's most unequal countries.

"Returning guests are rare," barman Simon Moteka said. "It's often a once-in-a-lifetime experience for them." 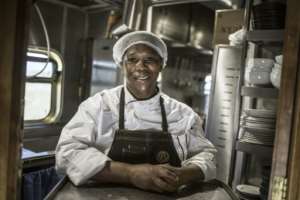 Blue Train staff like head chef Esther Ndhlovu put together menus of three to five courses along with wine pairings for the passengers. By MARCO LONGARI (AFP)

As dinner time neared, a loudspeaker announcement politely reminded men to don a coat or waistcoat and "women to be as elegant as possible".

Flip-flops and shorts gave way to dark suits and dresses before passengers made their way to the restaurant car, filling the narrow passageway with the scent of perfume.

The sun was setting as diners were shown to their tables, casting a golden glow over the sheep-dotted Karoo whizzing past the windows.

Each dish on the three to five-course menu is paired with a different glass of wine.

Dessert -- deconstructed cheesecake or a lemon meringue tart -- was followed by a shot of grappa or a sweet South African white from Klein Constantia.

The 61-year-old started his career as a senior waiter on a smaller train in 1981.

In 1993, he joined an all-white team of staffers, two years after apartheid formally ended. 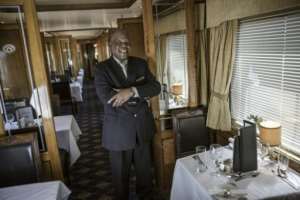 His first months were tough. Tall and shy, Masenyani was often teased.

"It was wonderful," Masenyani recalled, vividly describing the red carpet and the nervous bodyguards.

"Motorbikes on the road, helicopters," he glowed. "We took photos with him."

The highlight was serving Mandela his favourite chocolate fondant "with a passion fruit heart" and a sweet South African dessert wine.

"In fact, he was sitting at the same table as you," Masenyani gleefully told the AFP journalists.

"That's what he tells everyone," joked a passenger overhearing the conversation.

Some satisfied diners retreated to their freshly made cabin beds. Others headed to the observation car with its outsize windows, the lounge or the club for a nightcap.

Once on board, everything from the first morning coffee to a midnight cigar is included in the ticket price. 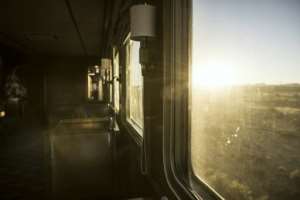 Much of the Blue Train's journey passes through the semi-arid landscape of the Karoo desert. By MARCO LONGARI (AFP)

Cash is banished -- passengers are asked to tuck their wallets away and "surrender to the luxury of the show."

Every evening, invisible fairies tiptoe into the cabins while dinner is served.

They bring firm mattresses down from nooks in the walls and stretch fresh-smelling duvets tightly across.

From fluffy pillows, one can turn to the window and gaze at the moon-lit landscape rolling by under a starry sky.

Tucked under the blankets, a hot shower or bath awaiting in the morning, passengers rocked by the gentle motion drift off to sleep.