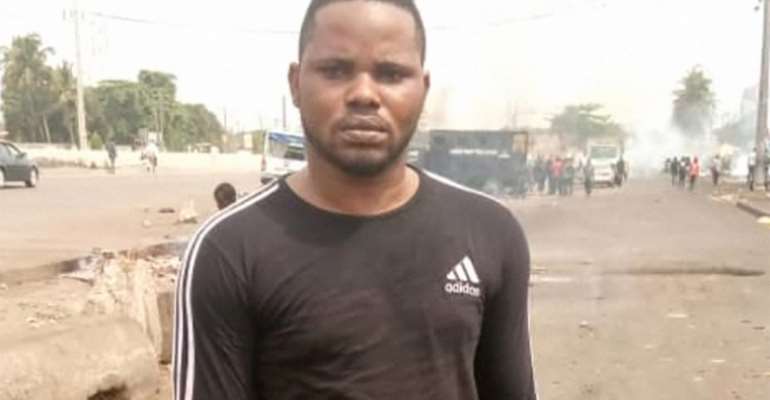 Journalist Eniola Daniel is seen after he was attacked by police in Lagos, Nigeria, on February 28, 2021. (Photo: Eniola Daniel)

Abuja, March 4, 2021 — Nigerian authorities should conduct a credible and transparent investigation into the assault of journalist Eniola Daniel and hold his attackers to account, the Committee to Protect Journalists said today.

At about 11 a.m. on February 28, seven police officers—six in uniforms and one in plainclothes—attacked Daniel, a reporter with the privately owned Nigerian newspaper The Guardian, after he photographed them demolishing makeshift houses in the Western Apapa council area of Lagos state, according to the journalist, who spoke by phone with CPJ, and a report and video of the attack posted by his employer.

Daniel identified himself as a journalist on assignment, but the officers seized and smashed his phone, tore his pants, briefly choked him, and punched him in the stomach, knocking him unconscious, while they questioned why he dared to photograph them, according to Daniel and that video.

“Authorities in Nigeria should credibly investigate police officers’ attack on journalist Eniola Daniel and hold those responsible to account,” said Angela Quintal, CPJ’s Africa program coordinator, in New York. “The absence of justice that trails similar attacks by police against journalists in Nigeria is inimical to press freedom and is a trend that must end.”

After beating him, the officers pushed Daniel inside a marked police van, where he regained consciousness and heard them calling him a “bastard”; ten minutes later, the leader of the police team asked one of the attacking officers to return Daniel’s damaged phone and the journalist was released without charge, he told CPJ.

Daniel said he called police spokesperson Olumiyiwa Adejobi immediately after the attack and said Adejobi told him to write a statement detailing the incident. Daniel said he sent his statement to police headquarters in Ikeja, the state capital, on March 2.

Adejobi sent Daniel a message late this evening saying that police had received his letter and that Adejobi would handle the matter and “advise appropriately,” the journalist said.

Daniel told CPJ that he visited a clinic where he was medically examined and treated after the attack and that he sustained a minor cut to his chest and injury to his hand, and has persistent back pain.

Adejobi told CPJ by messaging app that he had opened an investigation into the attack after being assigned to do so by the state police commissioner.