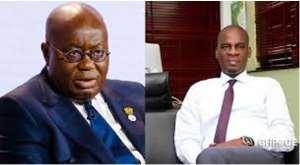 The Unanimous FC brought the trophy home, as expected, but unexpectedly, the opposing supporters union paid the bonus!

The man must be smirking, like any satiated fellow would, after being served a nice meal.

The meal was what was served at the supreme court on March 4 2021when the court handed down its decision to reject JM’s petition and the bonus was paid by the NDC side in parliament, a day earlier, when the NDC side of the house helped the NPP to confirm a number of Akufo-Addo ministerial nominees – the man whose presidential election “victory” they had vehemently rejected. So what’s going on? What has changed?

The social media, as can be imagined is buzzing – a hornets nest of stinging words or beehive of honeysweet triumphalist words. Generally incredulous and unamused, the NDC MPs have been having quite a drubbing. If I may, I would like to surrender the rest of this commentary to the post below I picked from one of the WhatsApp platforms I belong to. It is one of the milder examples:

“Ghana’s Parliament is still composed of 137 NPP MPs (+1 independent) and 137 NDC MPs. The NDC side objected to the approval of 3 ministerial nominees and published a “thesis” detailing why they had “rejected” them. When the house voted on whether to approve them late last night [03/0321], Hawa Koomson got 161 votes. This means at least 23 NDC MPs voted for her. Our good friend Kojo Oppong Nkrumah got 155 votes.

This means at least 17 NDC MPs voted for him. And our “uncle” Dr. Owusu Akoto Afriyie got 143 votes. That means at least 5 NDC MPs voted for him. Glad to see our good friend and our uncle sailed through. But wait ooo, so why were we all excited about the prospects of a hung parliament after December 7, 2020? We are back to ground zero, aren’t we? Obviously, the rejection was in words and not indeed. This country, let’s just sell it to the Chinese and share the money… Ten Ghana Cedis for everybody. That’s all…”

Shame? Sad? Disgrace? Betrayal? Treachery? Fear? Greed? Self-interest? Politics truly a dirty game? I am all of a sudden gripped by a feeling of sympathy for John Dramani Mahama – and in a sense for myself and for Ghana in general…What a heartbreaker!

As a mark of disapproval, disappointment and protest, I wish to suspend this column until further notice…And by the way, while we are at it, please look up Kwesi Pratt Jnr’s wail of pain on the same issue. I side with him 100%…