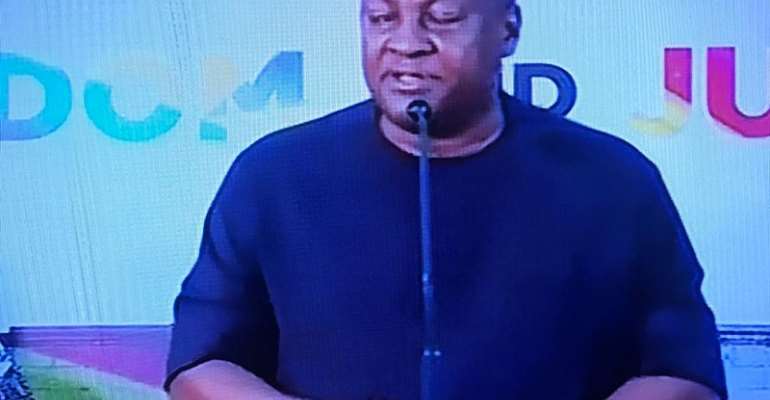 Former President John Dramani Mahama, who was the Petitioner in the just ended 2020 presidential election petition has urged members of the National Democratic Party (NDC) not to despair.

He further urges them never to lose hope but remain stronger ahead.

The former President is not satisfied with the ruling of the Supreme Court.

He said he disagrees with the process of the trial and the ruling of the court.

"Speaking as a Ghanaian with no legal training, I believe that Jean Mensa's refusal to testify in this election petition leaves a bad precedent for the future. Anyone who followed the proceedings will not be surprised by the ruling. Our legal team led by Tsatsu Tsikata put together our case which left no room for doubt. Much as I am aware we are legally bound by the decisions of the Supreme Court, I disagree with the process of the trial and ruling of the court," he stated.

He urges angry party members to channel their disappointments to hard work towards the next election, 2024.

In delivering the judgment, Chief Justice Anim Yeboah said the petition is dismissed without merit.

He noted that indeed, evidence on record clearly showed that the impact of alleged vote padding even if proved would be very insignificant to overturn the results obtained by President Akufo-Addo.

"We have settled in our minds that the allegation of vote padding though serious in our presidential election was not proved by credible evidence. Furthermore, even if the vote padding took place same was not material or substantial to change the final results so declared by the First Respondent Jean Mensa, Chair of the Electoral Commission."

The impact of the vote padding if even proved, Justice Anim Yeboah stated, could not have affected the declaration.

In a unanimous decision by the 7 justices of the Supreme Court, he indicated that they conclude the judgement by emphasising that the petitioner did not demonstrate in anyway how the alleged errors in the unilateral corrections by Jean Mensa affected the validity of the declaration made by her on December 9, 2020.

"We have therefore no reason to order a re-run," he intimated.

The Supreme Court's judgment addresses five issues that were set forth for determination, including the question of whether or not President Akufo-Addo met the constitutional threshold for election to the office of president.

Former President John Mahama who re-contested the election on the ticket of the National Democratic Congress (NDC), took the Electoral Commission to court, challenging the validity of the Commission's 9th December 2020 declaration of Nana Addo Dankwa Akufo-Addo as winner of the poll.

Mr. Mahama also contended in his petition that, President Akufo-Addo did not meet the constitutional threshold for election to the high office of the president yet was so declared.