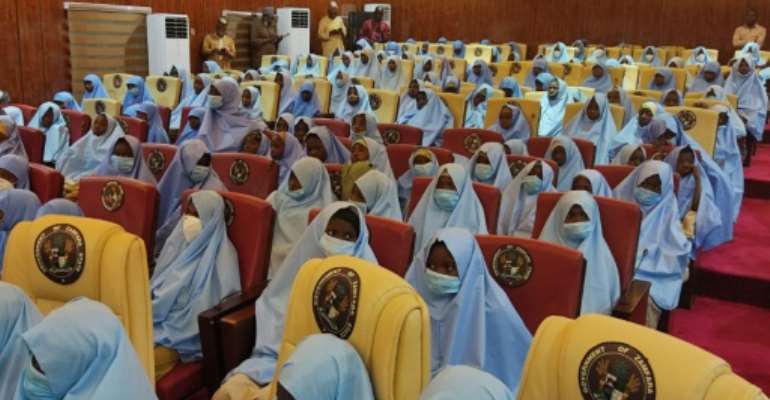 The girls were abducted on Friday from their hostels by gunmen known locally as bandits. By Aminu ABUBAKAR (AFP)

A 24-hour curfew has been imposed in a northwestern Nigerian town and its market shut after violence marred the reunion of nearly 300 abducted schoolgirls with their parents, local residents said Thursday.

The girls were abducted on Friday from their hostels by gunmen known locally as bandits, but were released early Tuesday after the latest mass kidnapping to target a school in Nigeria.

Violence erupted on Wednesday when the girls from Government Secondary School in Jangebe, Zamfara state were to be returned to their parents at a ceremony in the school's hall.

They had been in the government's custody in Gusau, the state capital, receiving medical care.

"After the unrest yesterday a dust-to-dawn curfew was imposed and everybody was ordered to stay indoors," said Abubakar Zaki, a resident and father of two of the kidnapped girls.

"But this morning after people had come out the DPO (Divisional Police Officer) went round, informing people the curfew has been extended to round-the-clock and asked everyone to return home," he told AFP.

Abubakar said the police also ordered the closure of the local market and all shops in the village to prevent fresh violence.

"We are all inside our homes," he added.

"There is a 24-hour curfew in Jangebe as a result of the violence by mobs yesterday," he said.

"The market and shops are closed and everyone is indoors," he said.

The girls were brought back to their school on Wednesday to be reunited with their parents before violence broke out.

Angered by officials' insistence on a formal handover before parents could leave with their children, mobs began throwing stones at officials outside the school.

One person was shot in the stomach when security personnel opened fire and was carried away by others in the crowd, an AFP reporter at the scene said.