By Danny KEMP with AFP bureaus 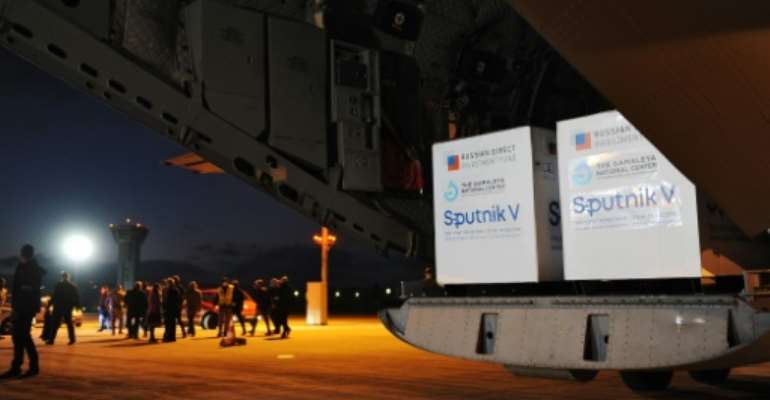 Some EU members have gone it alone, approving jabs from Russia and China unilaterally. By PETER LAZAR (AFP/File)

Russian coronavirus shots could soon be doled out across Europe after the EU said it was assessing the vaccine, as Britain pushed ahead with a plan to fast-track jabs adapted to fight new strains.

The EU's drug watchdog said it had started a "rolling review" of the Sputnik V shot, prompting Russia to say it could supply doses for 50 million Europeans starting from June.

The 27-nation bloc has already approved three vaccines, but its relatively slow rollout have been widely criticised and some members have gone it alone, approving jabs from Russia and China unilaterally.

The need for a wide vaccine rollout was underscored on Thursday, with the World Health Organization's (WHO) European branch warning that infections had once again begun to rise in the region.

Hungary is among the European nations suffering a surge in coronavirus infections and deaths, and the government said Thursday it will tighten its lockdown, ordering schools and most shops and businesses to shut. 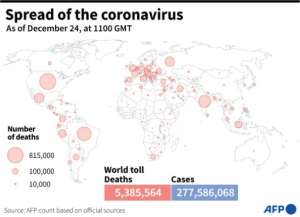 Global death toll and coronavirus cases as of March 4, based on AFP tallies. By Simon MALFATTO (AFP)

But leaders around the world are coming under increasing pressure to end lockdowns and business closures that have crushed the global economy.

While Germany is the latest nation to promise an end to restrictions, some US states have begun jettisoning federal requirements to wear masks -- much to the chagrin of President Joe Biden who called it "Neanderthal thinking".

The pandemic, which has killed more than 2.5 million since emerging in China in late 2019, has shredded the global travel industry. 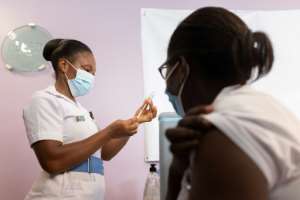 Ghana is among a clutch of African countries to begin vaccinating in earnest this week. By Nipah Dennis (AFP)

German airline Lufthansa announced on Thursday a record 6.7 billion euros ($8.1 billion) loss for 2020 with chief executive Carsten Spohr calling the year the "most challenging in the history of our company".

The sporting calendar has also been ripped up by the virus, with Pakistani cricket becoming the latest casualty.

And Japan is moving towards a ban on foreign fans at this year's summer Olympic Games, which has already been rescheduled from last year and faces daily questions over whether it will go ahead in any form.

Europe's vaccine policy remains chaotic and rancorous, with new rows brewing even as old ones are laid to rest. 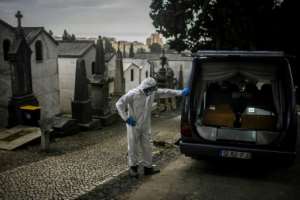 More than 2.5 million have died from the virus and European countries like Portugal are among the hardest hit. By PATRICIA DE MELO MOREIRA (AFP)

Germany on Thursday followed France's lead by authorising the AstraZeneca/Oxford vaccine for over-65s after a bitter row between the Anglo-Swedish firm and European leaders.

Belgium is expected to follow suit soon, after a raft of studies showing the vaccine is effective for the elderly.

However France has now waded into an argument with Austria and Denmark, who are bypassing the EU to broker a vaccine deal directly with Israel.

The EU has been trailing in the wake of Britain, which has approved jabs more quickly, sourced them more efficiently and rolled them out more effectively.

Britain was again at the forefront on Thursday, announcing a partnership with public health bodies in Australia, Canada, Singapore and Switzerland to ensure jabs modified to cope with new variants are fast-tracked.â€¯

"Our priority is to get effective vaccines to the public in as short a time as possible, without compromising on safety," Christian Schneider of the UK's medicines watchdog said.

As Europe remains mired in rows and faltering rollouts, several of the biggest African countries have only just begun their vaccination campaigns in earnest.

However, there was finally respite for some of those hardest hit by the pandemic, with exhausted health workers in South Africa celebrating a drop in cases and officials declaring the second wave over.

"One death is enough to traumatise nurses," Phuti Kobo, a ward manager at Thembisa Hospital near Johannesburg, told AFP.

"If you had more than five in a day, that was a real trauma, but we managed through it all. We will be much wiser when we approach the third wave. We are ready."