As We Await Judgment On The 2020 Presidential Election Petition 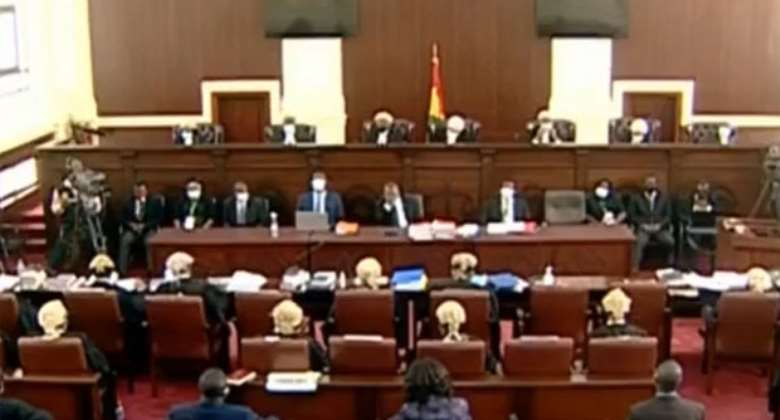 “All the great things are simple, and many can be expressed in a single word: freedom, justice, honour, duty, mercy, hope.” - WINSTON CHURCHILL

ALEA LACTA EST (The die has been cast), so said Suetonius to Julius Caesar in 49BC as he led his army across the Rubicon into Italy, beginning the long civil war against Pompey and the Optimates, with Caesar emerging as the Roman dictator. Any time in the forenoon of March 4, 2021, the Lordships of the Supreme Court will give their verdict in the case of the 2020 Presidential Election Petition.

Unlike the 2012 Election Petition which took eight months and a 5-4 victory for NDC, this one had stiff rules. Under Rule 69 (C) of the Supreme Court (Amendment) No. 2 Rules 2016 (C1. 99) enacted into law by Parliament in 2017 when Marietta Brew Appiah-Oppong was the Attorney General in the NDC government, there are strict timelines: Pre-trial on the 10th day after filing of the Petition; Hearing commences on the 15th day and ends on the 21st day and Judgment on the 42nd day. This is in spite of Baba Jamal's criticism of the shortness of the time because the “petition entails a lot.”

The case generated intense public interest – most especially since the original argument was that John Mahama had won. So people would burn tyres in the streets, and shout: “No Mahama, No Peace” at Kasoa, Ketu South constituencies, Tamale and EC headquarters, Accra, with placards reading: “Jean Mensa must declare Mahama as President-elect.”

When the NDC finally filed the petition, it was to ask the apex court to order the Electoral Commission to conduct a run-off between Nana Akufo-Addo and John Mahama as candidates, because Nana Akufo-Addo had not secured enough votes to be declared a winner. And the 1992 Constitution says whoever gets more than 50% wins the election. They (NDC) expressed doubt about the figures of 51.59% for Nana Akufo-Addo and 47.37% for John Mahama. And also the NDC wanted an injunction restraining Nana Akufo-Addo from holding himself out as President-elect. Coincidentally, Inusah Fuseini, an eminent lawyer, had earlier advised John Mahama to form “a parallel government”. There were a series of motions, and for each motion, the verdict was either 7-0 or 9-0 against the Petitioner. This did not mean the Petitioner could not argue his case out.

The NDC's original petition had errors, which as human beings like the EC Chairperson, we all make: like requesting the court to make the Petitioner (John Mahama) go for a run-off with 1st Petitioner (EC Chairperson).

The Electoral Commission decided not to mount the box in spite of the filing of her witness statement. The lawyer for 1st Respondent based his argument on order 3E of CI. 87 High Court (Civil Procedure) (Amendment) Rules, 2014 “(I) If a party has served witness statement and that party wishes to rely at the trial on the evidence of the witness who made the statement, that party shall call the witness to give oral evidence unless the court orders otherwise OR that party puts the statement in as hearsay evidence.”

This should ordinarily have made the Petitioner very happy, since a Plaintiff (or Petitioner) wins his case on the strength of his own Statement of Claim, evidence and others, not on the weakness of Defendant's case. This is a fundamental law which every law student knows. You cannot “compel” a defendant to mount the box and be cross-examined. Sammy Gyamfi, a junior lawyer of the Bar says: “Posterity will be our judge… Those who are crestfallen, …discouraged and sometimes call us, worried and disturbed saying 'why don't you withdraw this matter… you shouldn't ever go to court… We want to tell them that we understand and appreciate your frustration. Don't give up; we know what we want.”

But Tsatsu Tsikata is not just a hard nut to crack; he is a veteran and a legal pundit. He is septuagenarian like us, from Keta, promoted rapidly in elementary school like us, but luck smiled on him so that at the age of 16, after Mfantsipim, he entered the University of Ghana, got first class LLB (like Date-Bah) at 18, then got a scholarship to Oxford University, returning to Ghana in 1974 to teach people like Kwamena Ahwoi, Alban Bagbin and Freddie Blay. (Given our labyrinthine educational journey through teacher training, we would have been Tsikata. But would a lawyer not be as good or as bad as his case, and the Supreme Court is required to do justice according to law but not according to compassion or propaganda. And Dr. Dominic Akuritinga Ayine, (NDC MP for Bolgatanga East) thinks the Supreme Court has a “pre-determined agenda”. That 1st Respondent had violated Article 23 of the 1992 Constitution; that the Supreme Court was called upon to look at Article 296 of the 1992 Constitution, and that “…justices today have not given us a reason to believe that they want the people of this country to know the truth about what happened… Slap the contempt “in facie curiae” or “ex-facie curiae” (words of insult within the court or outside of it). “Contempt” is intended to protect the sanctity of the law and ensure judicial independence. The Supreme Court instead of convicting him merely asked Dr. Ayine to “purge” himself which he did through the respected Mr. Beecham and with the befuddling support of Mr. Amenuvor, the lawyer for 1st Respondent, but Dr. Ayine should have been given some “dry-ponding” (ne to pe)!

The Supreme Court judges acted in self-restraint like Lord Denning in 1970 when a lady found in contempt was given a few days in prison. Upon her release, the lady returned to the court and threw books at Lord Denning, who merely ducked them and continued his work at the London Court of Appeal. The lady said: “I must congratulate your Lordship for being so imperturbable.”

In 2013, the plea by Sir John and Sammy Awuku's lawyer Nii Ayikoi Otoo with his allusions to his birthday celebration touched the hearts of His Lordships Justice Atuguba and co. and after making them see their “smoothness level”, pardoned them to go and sin no more – that was after having been “humbled”. But in the case of Ken Kuranchie and Stephen Atubiga, they were given ten days, and three days in prison, perhaps because they and their lawyer Atta-Akyea did not appear apologetic enough. Atubiga had stated: “Ghana cannot contain all of us if NPP wins the court case, and Kwaku Boahen had said: 'Do you think the NDC will sit aloof and watch the court hand over power to NPP, never!” We have gone full cycle, and some people think nemesis has caught up with some people. They further think: “It is like a boomerang; it goes and returns to hit you.” And for some of us, there was “ambivalence” in Tsatsu's biblical quote: “For they sow the wind and they shall reap the whirlwind. These are the words of Prophet Hosea…” Amenuvor's response was equally “vacillating”: “God is a God of conscience and God does not use court process to elicit conscience… that because of God, applications should be granted”. What we know as “resolute” is the Golden Rule (Leviticus 19:18, Matthew 7 and Luke 6:31): “Do unto others as you would have them do unto you”. And a letter from the lawyers of the Judicial Service to all media houses was emphatic: “desist from publishing hateful, indecent and offensive statements against judges because they threaten the democracy and peaceful nature of the country. The statements and speeches bring the administration into disrepute as unsuspecting Ghanaians are being deliberately misinformed and manipulated to believe that the justice system is perverted and lacking in credibility”.

And Justice Apau while admonishing Dr. Ayine lamentably noted: “Judges are insulted by people who know nothing about the law…or… the issue before the judge and they talk and insult.”

Listen to Justice William Atuguba, the President of the Supreme Court that adjudicated the 2012 Presidential Election Petition: “…court decisions on matters of this kind have various impacts and effects, depending on the circumstances in each country… even if anybody is aggrieved with the ruling, their reactions should be within the framework of the 'rule of law'…We have a strong and solid independent judiciary in this country which must be preserved…

The advice by Justice Atuguba is apposite. Nobody should allow the spurious “investigative” work by Anas on the judiciary to sway their Lordships' thinking. We have only one country, Ghana, and destiny beckons us to live our appellation: First in democracy in Africa.