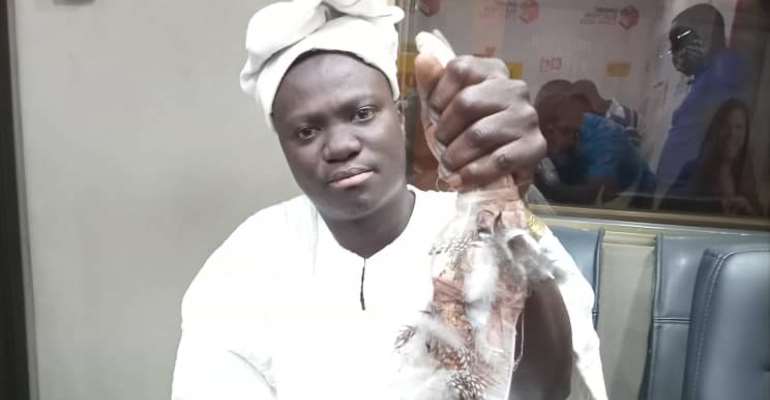 An African traditional spiritualist, practitioner and advocate, Nana Kwaku Peprah also known as Quotation Master or Ayaaba or Lucifer says Ghana will be the first among its peers to legalise LGBTQI.

In responding to whether Ghana would accept LGBTQI or not, he answered, "Ghana might be the first country to accept gays and lesbian rights before any other country in Africa. Which country has accepted the Covid vaccines first? is it not Ghana?"

Quotation Master explained that Ghana is the first country to accept democracy and the white man's religion on the continent.

According to him, same can be said of the Covid-19 vaccines which Ghana has been named as the country first in Africa to receive 600,000 doses of AstraZeneca vaccine from COVAX platform. "So people can make the judgement for themselves."

Quotation Master was speaking to Rev. Nyansa Boakwa on the 'Nsem Pii' show on Happy FM monitored on Happy TV on YouTube.

He responded by saying, "Why do we think we can? There is no way we can stop them. We shall accept it and go to church and clap for it in Ghana."

According to him, until Ghana stop depending on the western world for everything and begin to do something for herself, such bad lifestyles will continue to be forced unto us.

Quotation has also given reasons why he thinks no African leader can muster the courage to resist LGBTIQA+ rights.

He said there is general fear is that any state President who wages a serious war against LGBTQI may not live longer.

"No African president can stand up against gays and lesbians. If any President thinks he is bold and disagrees, he should come for a debate and let me show him something small. He who tries shall be killed," he claimed.

When his attention was drawn to the fact that, President Nana Addo-Danquah Akufo-Addo had spoken against it, Ayaaba stated, "When Covid broke out, did our president speak, he did. But, haven't we accepted the vaccines? We have. In the same way, we shall accept and applaud gays and lesbians in our country.

"We cannot fight the Whites and their decisions because they have conquered us especially our spirituality and they have destroyed our spiritual backbone which served as a pillar and support for us."

He noted that,"There is no way we can prevent gayism in our land so we should be ready. We shall accept it. I don't support it, but that is what would happen so I don't want to lie about it."

He continued, "Once your spirituality is broken by someone else, it is very difficult to resist the things that person pushes down your throat."