Lives of youth 'in jeopardy' in Middle East, North Africa 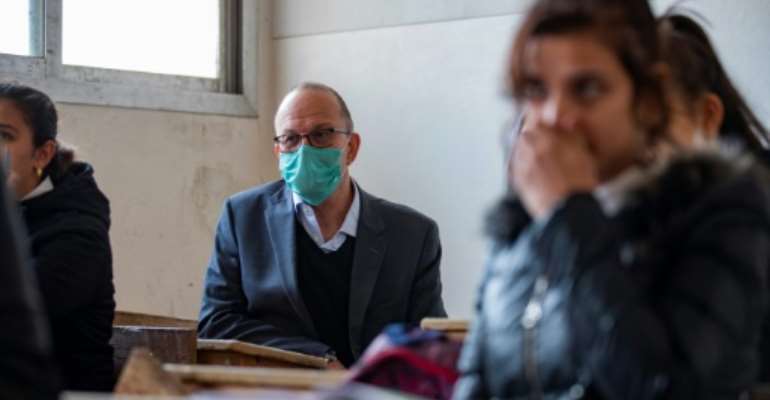 UNICEF's Ted Chaiban visits a school made of 12 prefabricated classrooms in northeastern Syria. By - (UNICEF/AFP)

A decade since Arab Spring protests rocked the Middle East and North Africa, many of its youth are in need and at risk, says the UN children's agency's regional director.

"After 2011, the lives and futures of children and young people have been put in jeopardy," Ted Chaiban told AFP in an interview in the Jordanian capital Amman.

"This is a combined result of conflict and the fall of oil prices, which has narrowed opportunities for children and young people in the region."

The MENA region counts 124 million people aged 10-24 -- just over a quarter of the whole population.

Chaiban said there were 38 million children and adolescents requiring assistance in the Middle East and North Africa (MENA) region -- "the highest number of children in need in the world".

The region accounts for half of UNICEF's worldwide humanitarian response appeals -- "a significant increase since 2011" due to the political and economic developments, he said.

The region is also home to the world's worst youth unemployment rates -- 25 percent in the Middle East, and 29 percent in North Africa -- according to Chaiban.

The jobless rates are higher for young females: 41 percent in the Middle East and 39 percent in North Africa.

'Tip of the iceberg'

The World Bank says the region will need to create 300 million new jobs by 2050, according to current demographic trends.

From war-ravaged Libya to Syria and Yemen, the region has also been the scene of violence impacting thousands of young lives.

Of 28,000 "grave violations" the UN documented against young people worldwide in 2019, almost half took place in just seven countries or territories in the MENA region, Chaiban said.

"This is an exponential increase in comparison to pre-2011 because of the conflicts in the region," he said.

The UN considers the killing, maiming, sexual abuse or abduction of children, as well as their recruitment as child soldiers and denial of humanitarian access, among its definitions of "grave violations".

"This figure is, however, the tip of the iceberg. The actual number of children killed and injured is likely to be much, much higher," said Juliette Touma, UNICEF's regional head of communications.

The figures represent just "what the UN was able to verify through a very strict verification process".

The Syrian Observatory for Human Rights, a Britain-based war monitoring group, says more than 22,000 children have been killed in the country's civil war, which broke out a decade ago this month.

The coronavirus pandemic has heaped further hardship on children from across the Middle East and North Africa, depriving 40 percent of their lessons due to a lack of access to online learning, said UNICEF.

"UNICEF is calling for schools around the region to reopen using shifts and appropriate safety and health measures," Chaiban said.

But, he said, there were some glimmers of hope.

Chaiban urged efforts "to reform the education sector around the region, to keep children and young people engaged and equip them with the skills necessary to match the demands of the rapidly changing economy, market demands and jobs of the future".

But, he warned, "there is a crucial need for a new relationship between governments and young people".

Children and young people must have "venues and space to express themselves, to raise their concerns freely and share their ideas in a constructive manner on issues of poverty, inequality, inequities and improved governance", he said.