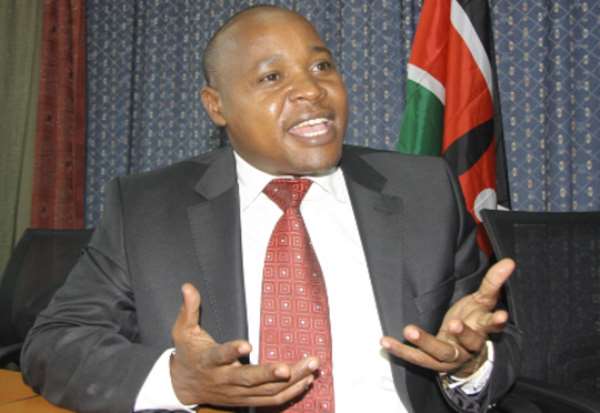 As Secretary-General of the regional bloc, his key tasks include regional development, increasing inter-regional trade and to address investment possibilities for both potential internal and external investors.

According to his profile, Mathuki has worked as Executive Director at the East African Business Council, and consequently emerged as the top candidate for the position. Over the years, he has been dealing with the corporate business sector, and believed to have sufficient experience and contacts useful to address incessant wrangles in the East African Community.

Mathuki previously served as a member of the East African Legislative Assembly, chairing the Committee on Legal Affairs and Good Governance as well as Accounts, Trade and Investment.

He has held political positions in Kenya and in international bodies including the International Labour Standards at the former International Confederation of Free Trade Unions (ICFTU-Africa), now ITUC-Africa, which he served as director. He was also a consultant for European Union programmes in Kenya.

Mathuki comes on board as the African continent implements the Africa Continental Free Trade Area (AFCFTA) agreement, where he has been involved in the creation of the nascent African Business Council. Trading under this AfCFTA began on January 1, 2021 and opens up more opportunities for both local African and foreign investors from around the world.

Mathuki was taken on as a rectification strategy by Kenya, following a low-key leadership by Mfumukeko. Under his term, countries routinely skipped summits and member states wrangled over tariffs and political accusations. His secretariat faced financial constraints as member states delayed remitting their membership dues and donors reduced funding following allegations of corruption.

The latest report from the East African Community Secretariat for this year shows, for example, that South Sudan is the most indebted member of the EAC. It owes US$24.6 million in funding towards the main budget even though it should pay up to US$32.4 million including this year's dues. It should also pay US$2.8 million to the Inter-University Council of East Africa and another US$345,000 to the Lake Victoria Fisheries Organization.

The main budget usually funds the operations of the EAC Secretariat, the East African Court of Justice, the East African Legislative Assembly and other bodies dealing with specified fields. The Secretary-General is the principal executive and accounting officer of the community as well as the secretary of the summit and serves for a fixed period of five years.

The East African Community (EAC) first collapsed and was revived in November 1999 to strengthen ties between the members through a common market, a common customs tariff, and a range of public services to achieve balanced economic growth within the region.

Under the current Chairman, Rwanda's President Paul Kagame, many businesses and market players perceive positively the region as stable for long-term beneficial business, investment and trade. Some political, social and economic challenges still remain to be addressed, though.

With a combined population estimated at 183 million, the region is relatively large. The East African Community is an intergovernmental organization composed of six countries in the Great Lakes region in Eastern Africa. The members are Burundi, Kenya, Rwanda, South Sudan, Tanzania and Uganda.

The author has 76 publications published on ModernGhana.

Stiffer sanctions needed to punish persons who engage in tax...
53 minutes ago