A word comes to pass 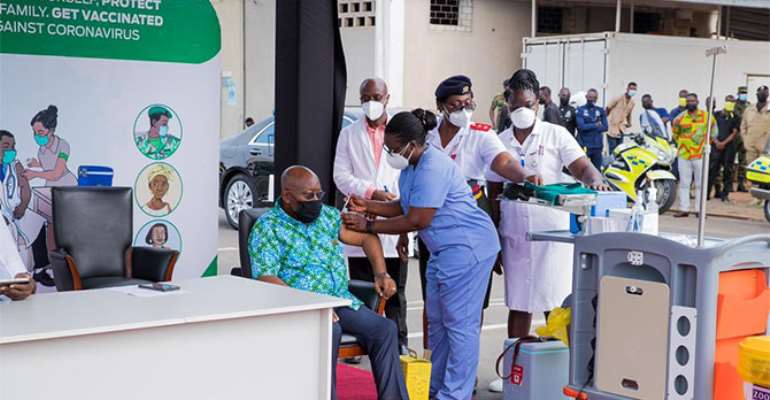 President Akufo-Addo's word and prayer have come to pass as his compatriots take their turns to take the COVID-19 jab he promised them.

In April last year during the early stages of the pandemic, predicting the manufacture of vaccines let alone making same available to Ghana at this time of 2021 would have sounded like a fairy tale. Today, it is here and gratis.

At the time that President Akufo-Addo announced that Ghana would take delivery of the vaccines, it sounded unfeasible as European countries held on to their stockpile of the stuff.

We received the first batch of the vaccines ahead of schedule and yesterday Ghanaians took turns to have the jab administered to them.

The end of the tunnel is bright as many Ghanaians descend upon the designated vaccination points to take their jabs.

One day, like it was with the polio, measles and other vaccines when they were launched, the COVID-19 vaccines too would be embraced by all Ghanaians.

We wish to laud managers of the rollout for a wonderful job done so far. It might be too early to praise them since these are early days yet, but the signs are so encouraging that we have no doubts about a successful vaccination of twenty million Ghanaians, the target number.

It is not an ambitious figure; we shall as a country surmount the hurdles of rolling out a novelty vaccination.

We can bet that the programme is going to be oversubscribed as many Ghanaians previously undecided get convinced about the efficacy and safety of the vaccination.

The CEO of the Food and Drugs Authority (FDA) gave a certificate of safety for the vaccine. There could not have been a better certificate than this considering the pedigree of the FDA in international ranking.

Having taken their turns at the International Press Centre yesterday, journalists queued to take the jab. The response was so encouraging that we can count on the media support for all Ghanaians eligible to take the jab to do so.

The political leadership of the country has already taken the jab as well as other dignitaries. What more do the sceptics want to see to be convinced about the safety of the vaccines?

We salute the President first of all and the Ghana Health Service for their efforts.

To the United Nations International Children's Emergency Fund (UNICEF) and World Health Organisation (WHO), we join the President in doffing our hats in acknowledgement of their commitment to making the vaccines available to us in spite of the biting vaccine apartheid which prevailed earlier.

Former President John Mahama has availed himself of the vaccine rollout too. If only he too could join in lauding the efforts of the President and the Ghana Health Service, he would have supported a worthy cause openly.