By Ben Sheppard and AFP bureaus 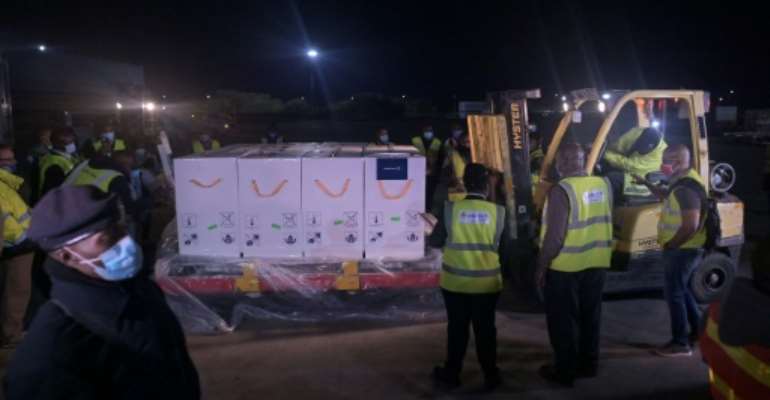 Some of the first batches of the Covid-19 vaccines arrive in Kenya to be loaded onto temperature-controlled trucks for transportation to a cold-storage facility in Nairobi. By TONY KARUMBA (AFP)

The United States will have enough Covid-19 vaccines for its adult population by the end of May, President Joe Biden said Tuesday, while Brazil's troubles deepened as it registered its highest 24-hour death toll.

The two countries have the largest number of deaths in the world, with 515,000 coronavirus fatalities in the US and 255,000 in Brazil, with both counting the cost of mixed public health advice on masks and other measures.

The state of Texas took the contentious step Tuesday of lifting its mask mandate, despite dire warnings from US health authorities against states rolling back steps taken to restrict the spread of the pandemic.

Biden announced a major deal for pharma giant Merck to produce the vaccine shot developed by its rival Johnson & Johnson, hailing the accord as "the type of collaboration between companies we saw in World War Two." 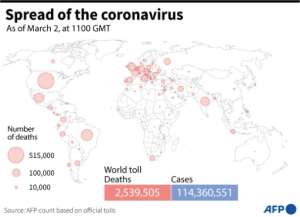 Global death toll and coronavirus cases as of March 2, 2021 based on AFP tallies. By Simon MALFATTO (AFP)

"We're now on track to have enough vaccine supply for every adult in America by the end of May," said the US leader -- who previously targeted late July to amass sufficient doses to inoculate all Americans.

"That's progress. Important progress. But it is not enough to have the vaccine supply," Biden said, stressing that a huge effort still lay ahead to administer the vaccines once acquired.

"Now is not the time to let up," warned the president, calling on Americans to keep social distancing and wearing masks, even as new coronavirus cases fall and more are vaccinated.

Abbott said he was lifting the restrictions in Texas because of the arrival of Covid-19 vaccines and better testing and treatments.

"For nearly half a year, most businesses have been open either 75 percent or 50 percent and during that time, too many Texans have been sidelined from employment opportunities," he said. 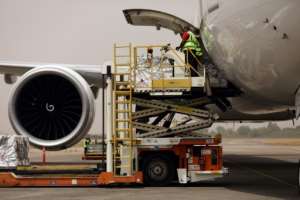 Oxford/AstraZenica Covid-19 vaccine doses are offloaded from a plane after its arrival in Abuja, Nigeria, on March 2, 2021. By Kola Sulaimon (AFP)

"Too many small business owners have struggled to pay their bills... This must end. It is now time to open Texas 100 percent," he said to cheers from his audience.

A scale of challenge confronting Brazil was highlighted on Tuesday when it registered a record 1,641 Covid-19 deaths in 24 hours.

Brazil has had a piecemeal pandemic response, with individual cities and states setting their own policies in the face of far-right President Jair Bolsonaro's repeated attacks on restrictive measures and face masks.

Several cities and states last week began imposing a new round of restrictions in a bid to avoid overwhelming their already stretched hospitals.

The country began vaccinating in mid-January, but is far off-pace to meet a government pledge of immunizing the entire population by the end of the year.

The European Medicines Agency said Tuesday that it is set to decide whether to authorize Johnson & Johnson's single-shot vaccine for the EU on March 11. 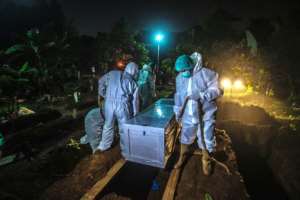 Gravediggers bury a Covid-19 coronavirus victim at a cemetery in Bogor, on the outskirts of Jakarta, Indonesia on March 2, 2021. By ADITYA AJI (AFP)

If approved by the Amsterdam-based regulator, the vaccine would be the fourth to get the green light for the 27-nation bloc, in a boost for its slow-starting vaccination program.

Elsewhere, millions of coronavirus shots from the global Covax scheme arrived in Nigeria, Democratic Republic of Congo and Angola on Tuesday, as African countries ramped up their vaccine rollouts.

Last week, Ghana and Ivory Coast were the first African countries to receive vaccines from Covax, which is aiming to supply two billion doses by the end of the year.

Richer countries have surged ahead with vaccinations, but many poorer countries are awaiting deliveries, prompting the World Health Organization (WHO) to warn that the crisis cannot end unless everyone can inoculate their populations.

The Covax facility, run by the WHO along with health NGOs, is aiming to supply vaccines to dozens of countries in the first 100 days of 2021.

However, there are still critical hurdles for the rollout in vast African countries with sketchy infrastructure and an array of security challenges -- a point addressed by Faisal Shuaib, director of Nigeria's primary healthcare agency.

"States without a functional airport will have their vaccines transported by road using vans with fitted cold cabins, from the nearest airport," he said.

He called the delivery -- which arrived around noon in the capital Abuja -- a "good day for Nigeria" and promised the rollout would begin in earnest on Friday, with frontline health workers the first to be inoculated.

Covax, an initiative led by Gavi the Vaccine Alliance, WHO and the Coalition for Epidemic Preparedness Innovations (CEPI) with UNICEF as implementing partner, is aiming to deliver 237 million AstraZeneca doses by the end of May.