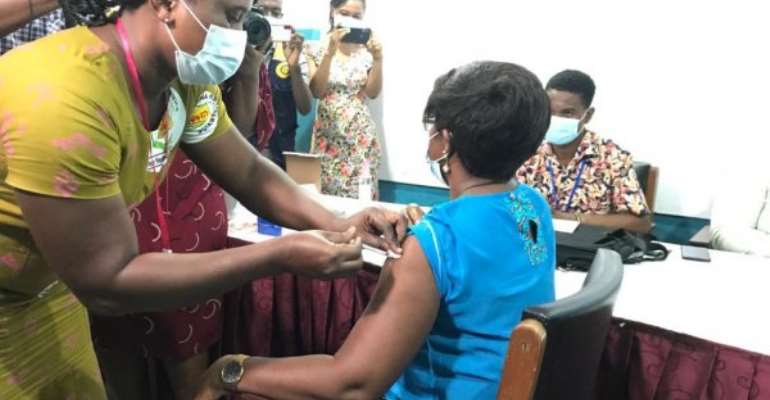 Eight hundred vaccines were allotted to the Ghana Journalists Association in the Greater Accra Region.

Sharing their experiences with the Ghana News Agency, Mr Monney said he psyched his mind against the mendacious narratives and conspiracy theories about the vaccine before going for it.

As a people at the helm of affairs, he said, the media had a responsibility to walk the talk by not only taking the vaccine symbolically, but sending the right signals to the right circles that it was safe and sacred for people to go in for the vaccination.

Mrs Asante-Agyei said receiving a new vaccine was normal and had been the case for many years, hence it was not worth it for people to be afraid to take the jab.

She appealed to media institutions to allocate airtime and spaces on their platforms to sensitise the public on the vaccine and the need to embrace it for maximum protection.

On the part of Mr Boadu-Ayeboafo, the vaccination was a 'chicken-feed as compared to that of tetanus', explaining that it was not painful other than the usual feeling after receiving any jab.

“At the end of the day, we will not be guinea fowls when we receive the vaccine, we will remain human beings,” he said.

He encouraged journalists to avail themselves for the vaccination to have a strong basis to educate the public on its usefulness.

Nana Apenteng said the vaccination exercise was a splendid opportunity that all needed to grab.

Responding to the frightening assumptions about the vaccine, he said: “Yesterday I saw the President and his wife, Mr Biden in the US, and other world leaders taking it. If it was a bad thing, do you think the President and his wife would take it the same day? If there were any fears, I'm sure one would have taken it and the other four days later.”

The media, he believed had a responsibility to demonstrate publicly the faith they had in the vaccine, adding that, they first had to be conversant with how it worked to be able to enlighten others on it.

Mr Blay-Amihere urged the Ministry of Health and the Health Directorate to be more proactive in giving out information through the media and the National Commission for Civic Education to reach out to the public on the vaccine.

“The problem is lack of education. The information is not getting out to the people. If the President and his wife took the vaccination and are alive today, who am I to say I won't take it. I took it and I am fine, so I believe everyone must get involved,” he said.

Mrs Savage said the vaccine was important to protect the nation against the virus that had taken lives and disrupted its socio-economic activities.

She said the nation had to get back to its normal life and the vaccination for now was the easiest way to get there.

She encouraged everyone who had the opportunity to grip the jab for the entire nation to get a herd immunity to get back on its socio-economic progress.

“After taking the vaccine, I feel comfortable, I feel safe, I feel healthy. I don't think that there is any danger to my health,” she said.