What At All Can Move Ghanaian Officials To Meaningful Action? 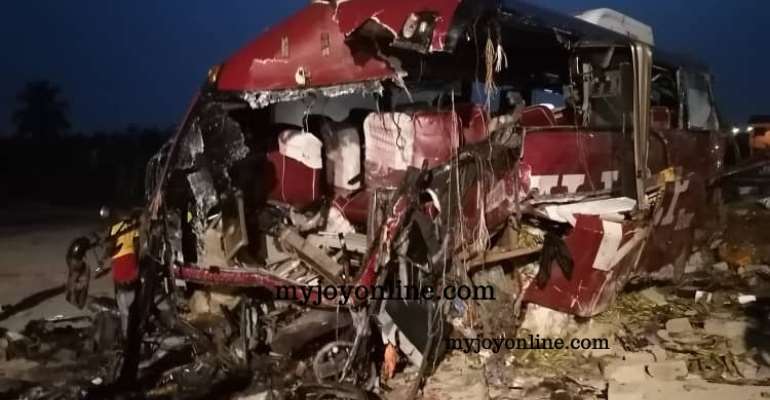 No Ghanaian who possesses even a tiny bit of empathy for his or her fellow countrymen can look at the state of affairs in some aspects of our socio-political life without throwing his or her arms up in utter despair.

Bad things continually happen to our people. We read about them and are appalled. Intelligent, concerned people offer sagacious suggestions about how to avoid such disasters in future. But these are not often knowledgeably discussed – as they are in some countries.

The incongruous sentence above is actually illustrated in exact detail by a compendium of pictures that appear on a webpage that has been thoughtfully put together about motor accidents in Ghana, especially on the Accra-Kumasi route. Please take a look and ask yourself: do we have a caring government in Ghana? Here is the link to the webpage:

(I haven't got the time to test the link and verify that it is live, but if you want to see the pictures, go to Google and Search for Ghana Road Accidents: Images.)

After taking a good look at those pictures, you will be in no mood for more macabre depictions of our insensitivity towards the safety of our fellow citizens. But I cannot help directing you to the latest video report depicting the indifference with which we go about our duty towards the public. Here is the link to that video:

We do mourn the victims of such horrendous accidents; we wear sack-cloth and throw ash on our bodies. “Woe is us!” we cry in genuine grief. But even though the really concerned individuals in our society spend hours trying to find – and publish – solutions that can prevent such things from happening again in the future., nothing is done! It's as if we lived in a black hole, from which light can neither escape nor flourish.

Reflections such as the following have been published in Ghana:

Please Stop The “terrorism” On Our Roads! By Cameron Duodu

“A friend of mine, commenting on the report that about 70 people had perished in an accident on the Kintampo road, and that a further 20 lives had also been lost in the Central Region – all on the same day – pointed out that when fifty or so people were slaughtered in mosques in New Zealand, the Government there had declared the killings an act of “terrorism”.

'But what is Ghana doing about this spate of horrendous accidents on her roads?' my friend asked. 'If such a large number of people had been killed in one incident at a public spot with guns, wouldn't the Ghana Armed Forces be mobilised to find the murderers?'

“In truth, our Government correctly condemned these accidents when they happened. But then – “Full stop!” End of story!” UNQUOTE

In the article quote above, I pointed out that “Full stop!” End of story!” was “precisely what happened when the popular singer, Ebony, lost her life in February 2018. A similar public expression of despair over road accidents had also occurred when three eminent urologists at Korle Bu Teaching Hospital were killed on the Kumase-Accra road in August 2005. (that is, 13 years before Ebony died on our roads.)

In an article published on 17 February 2018 entitled:“Making the President's dictum on road safety work”, I offered these ideas:

“After the tragic death of Ebony, our President, Nana Addo Dankwa Akufo-Addo, charged no less than three Ministers with the duty of developing proposals that would enhance road safety in the country.

But “knowing Ghana's public service, I am a bit sceptical about the outcome of the exercise the President has set in motion. There will, initially, be a lot of noise in the media about what the Ministerial Committee is going to be doing. Then, after three months or so, there will be a report and an indication of action about to be taken to implement the report. But the media will publicise these intended actions without anyone verifying any of it. And the usual Ghanaian “silence of the tomb” will reassert itself!”

“Was I wrong in writing in that vein? Who has heard about the implementation of the “proposals” developed by the three-man “Ministerial Committee”? If the Ministerial Committee had accomplished the serious task the President had entrusted to them, could the accident on the Kintampo road have been avoided?

“We don't know! But in my article of 2018, I did warn the Ministerial Committee “not to make the fatal mistake of handing the job over to the “experts” in their Ministries! I said:

QUOTE: ”They should listen to the experts all right. But they should make their own decisions. For if they (the experts) wanted to use their knowledge and experience to prevent these accidents they would have done so! It was “experts who approved the construction of those deadly roads, was it not? ” I asked.

I suggested then that the Ministerial Committee should “draw up a list of 10-20 of the most frequently used major roads, which its members would inspect with a fine tooth's comb, to map out dangerous corners; hills and hillocks that constitute a dangerous hazard to motorists overtaking others; bad surfaces that divert drivers away from their given paths; areas where over-speeding is likely to occur; and obstacles like gravel piled up on the roadside and not adequately sign-posted, if signposted at all.

I added, QUOTE: “The Committee should ask for emergency funding that will enable every potentially dangerous hazard to be VIVIDLY SIGNPOSTED. They should then charge the Ghana Police Service with the duty ofconstantly monitoring the observance, or otherwise, of these road signs, by drivers.

“The monitoring team should also detect broken-down vehicles and get them TOWED AWAY URGENTLY.

Where that's impossible, HUGE 'DANGER' SIGNS [WITH ALL-WEATHER VISIBILITY] SHOULD BE UNFAILINGLY PLACED near the breakdowns.” UNQUOTE

I suggested, also, that the Committee should consider establishing, at vantage points on the highways, Road Safety posts, manned by para-medics equipped with mobile phones (and motorbikes and/or cars) who can offer first aid to passengers injured in accidents. These teams could also alert hospitals and clinics to dispatch ambulances to accident spots to pick up the more urgent cases, because in a lot of cases, injured passengers are unintentionally killed off by helpers who do not know how to detect injuries and how NOT to make them worse by wrongful handling – with the best of intentions.

With regard to further measures that could be taken to improve road safety, I pointed out that “So much depends on our police personnel and the examiners who give vehicles road-worthy certificates. Many vehicles are on our roads that do not have effective braking systems. The tyres on vehicles must also not be bald, otherwise they can cause a vehicle to spin out of control. Again, the tyres must be pumped to the correct, secified pressure.

“A lot of drivers are aware of these things but still – unfortunately – do get involved in accidents. This is where the police come in. If drivers had confidence in the police, they would report other drivers whom they suspect to be drunk, to the police! In any case, the police themselves must check not only the vehicles on the roads but also the drivers behind the steering wheel. They should ask questions: where are you coming from? How long have you been on the road today? Have you eaten? Have you had a rest? And so on. Whilst observing the drivers closely to find out whether they exhibit any signs of intoxication or fatigue.

Above all, every policeman should remember this: Every time you take money from a driver and allows him to go free, although you know he has disregarded the rules on road safety, it's as if you'd taken a sharp knife and deliberately plunged it into the heart of a fellow Ghanaian, who has not offended you!

Whatever happened to the Inter-Ministerial Committee on Road Safety?

The answer is in our black hole!

Whatever happened to all the ideas I and other people contributed to the discourse on this subject?

The ideas will be there, I fear, till a veritable singularity occurs!