Why Scandalising the Supreme Court in the name of Partisan Politics? 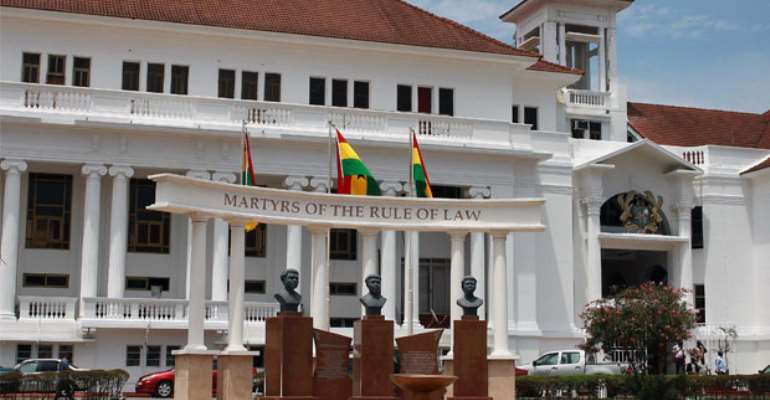 For lack of knowledge, truthfulness but abundance of selfishness and visionless, my Ghanaian people perish. Many a Ghanaian for their absurd infatuation with partisan politics and the ease with which they are manipulated have come to desire to rubbish a powerful institution as the Supreme Court of the nation.

When some judges are exposed for taking bribes to twist justice in favour of otherwise guilty parties in lawsuits but who are able to pay them bribes, then such judges can be singled out for naming, shaming and bastardising. I have no qualms about that. However, knowingly attacking Supreme Court judges for applying the laws as are enshrined in the nation’s constitution, rules of court, case laws, applauded court procedures and best practices, in relevance to cases brought before them, smacks of the Ghanaian ignorance and utter stupidity.

How do you file a lawsuit as a plaintiff, proceed to court for a hearing without submitting to the court facts and credible, permissible and acceptable evidence relevant to your case but still expect to win your case? How do you present to court unreliable witnesses who end up jeopardising your case when they are subjected to cross-examination while in the witness box?

When a party in a lawsuit proves itself so disappointingly discreditably by not discharging its onus of proof of evidence, but seek to rely on the weakness of the defendant’s case, not the strength of his, to win the case, what do you expect from a judge applying the relevant laws and procedures in place to such a case?

When the laws are stringently applied, according as known and stated in the statute books, to me, it is only a fool with his/her minded clouded in absolute ignorance and bestiality that will pronounce statements in contradiction to the laws, their application and relevancy.

No matter how better and highly educated you are with chains of degrees and PhDs, no matter how rich you are, no matter how well-positioned you are in the society, if you cannot comprehend and accept the simple truthful applications of the laws and their relevance to cases, then I am afraid, you are living on probably another planet, possibly a cloud cuckoo land (a state of absurdly over-optimistic fantasy), if you are not rather engulfed in hallucinations.

What wrong has the Supreme Court bench sitting on election 2020 petition done? Any intelligent person desiring to acquire knowledge to make them confident and probably powerful will avail themselves of the internet by googling the laws they cite to buttress any decision they assign to any action they have so far taken, to check their veracity, application and relevancy to the situation. You don’t simply have to rise up, join the naysayers’ bandwagon to spew balderdash.

On the ongoing election 2020 petition pending before the Supreme Court, some people for their political partisanship and the fear of having failed to justify their cause, have rather taken to the social media displaying their anger, ignorance, apprehension and folly, in the hope of ganging up the unsuspected masses against the Supreme Court judges. That is wrong and malicious.

As I have narrated a story of an encounter with some monkeys on my father’s cocoa farm in the Western region nearly fifty years ago, in my previous publication and we could not kill any for the fact we had not the relevant tool, thus gun, so does it go to conclude that without the relevant facts and evidence, you have an uphill battle to fight winning your court case. There is no ifs and buts about it!

Therefore, whoever decides otherwise by scandalising judges for applying the laws as are relevant to a case brought before them, in my candid opinion, is a big fool.

The laws in Ghana can be colonial, archaic and whatever but as long as they have not been amended, they have to be applied as they are. I am only against any judge who will not apply the laws as they are but as they may be influenced by corruption to do.

There is no way that in the United Kingdom, France, Germany or the United States of America, any of their citizens will have the shameless audacity to scandalise Supreme Court judges for applying the laws as they are and will be allowed to go scot-free as it is deceptively being told to Ghanaians by some mischievous partisan individuals.

In the civilized whiteman’s land, the laws work so the citizens being conversant with the consequences for breaching the laws will not stupidly dare take on the Supreme Court judges on cases still pending before the court unlike in Ghana. Therefore, all the loudmouths talking rubbish had better shut their chattering boxes up if they can’t tell the truth.

Weaken the Supreme Court at the demise of the nation, oh ye political partisans and educated-illiterates!